Economically, the country is far from the visions of recovery and renewal promised by the Coalition and its media retinue. If anything, conditions are getting worse for the majority, while markets remain volatile. Underlying this trend is a continuing engrossment of wealth and privileges enjoyed by the rich. As pointed out by countless observers, while the earnings of the average employed person are either static or declining, the salaries and bonus options of the 1 per cent continue to rise. In this extract from The Extreme Centre, Tariq Ali critiques the politics of Thatcher and Blair. 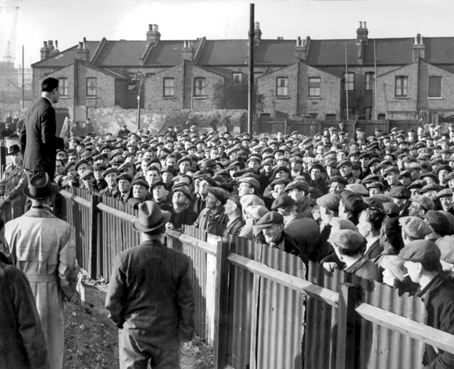 The origins of the new politics are firmly rooted in Thatcher’s response to Britain’s decline. Unemployment was ruthlessly held above three million for ten years, enabling the Conservatives to push though a programme of social re-engineering – deploying state resources to crush the unions and initiate the privatization of public utilities and housing, in hopes of creating a nation of ‘property-owners and shareholders’ – that transformed the country.1 The defence industry was ring-fenced while the rest of manufacturing was handed a collective death warrant. The defeat of the miners’ strike obliterated any possibility of resistance by the trade-union leaders and the rank and file. The triumph of finance capital was now complete. The decline of large parts of the country continued apace, and in turn, the country became increasingly restive.

How would the people react? After eighteen years of Conservative rule, they voted Labour and Tony Blair into office with a huge parliamentary majority, achieved by virtue of an antiquated and blatantly unrepresentative first-past-the-post system: 13.5 million, against 9.6 million for the Conservatives and 5.2 million for the Liberal Democrats. Blair had fought a slick campaign that made few promises, but traditional Labour supporters nodded their heads in appreciation and thought him wise. The key was to return Labour to power after the locust years. Many assumed that once in office Labour would return to some form of moderate social democracy, a little bit of Roy Hattersley, perhaps.

Few would have believed that Labour had become a party of war and finance capital. Yet New Labour was, as it turned out, little more than a continuation of Thatcherism by the same means. As if to stress the point, both Blair and Brown, on becoming prime minister, invited the old crone in to Number 10 for a whisky and a quick photo-op. This was not opportunism; their admiration for her was genuine. 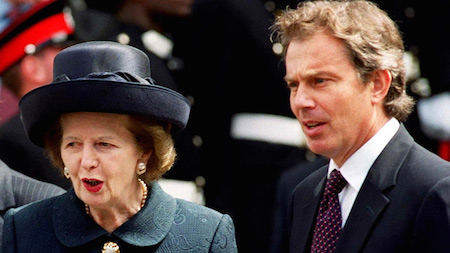 Blair’s position as leader of the Labour Party was not preordained. It was the result of John Smith’s untimely death. Ideologically, Smith was a staunch European social democrat whose instinctive tendency would have been to establish close relations with Berlin and Paris. By contrast Blair styled himself as an English version of the Clinton who had recently shifted the US Democrats to the right, abandoning any pretence of a New Deal. The scale of Labour’s electoral victory in the May 1997 general election surprised its leaders. They had fought a banal campaign, strong on presentation, weak on politics. It stressed continuity with the old regime rather than any serious change. Blair’s presidential demeanour smacked of Bonapartism. His image was used to reassure Middle England voters that he was not too different from the Tories who had governed Britain since 1979, and that he would be a friend of big business.

It was publicly stated by Blair and his spin doctors that the trade unions would be kept at arm’s length. It was also hinted that Blair and his group would like to detach the Labour Party from the trade unions altogether. A modern, democratic party had no time for old-fashioned conflicts. Ideally, Blair wanted a coalition government with the Liberal Democrats to lay the basis for a new centrist party that could dominate politics for the next fifty years. The size of Labour’s electoral majority made any such desire utopian. Instead Blair and his colleagues transformed the Labour party beyond recognition. Its slow collapse today will resuscitate the project, if the Lib Dems don’t lose most of their seats.

During a lunch for big business at London’s Savoy Hotel on 13 May 1996, Peter Mandelson, a close ally of Blair, stated that he favoured ‘healthy profits’ for companies and was not unduly bothered by the fact that this would ‘inevitably lead to inequalities in incomes’. After two years of Blair, the gap between executive salaries and the average wage was the largest in Europe. This was widely interpreted as a pledge that Britain was safe for foreign investors. As a result the British economy was soon dominated by transnationals. Today, this market is five times greater than the rest of Western Europe and three times that of the United States.

Blair’s ideologues were so convinced that victory had only been won because they had ditched a traditional social democratic programme that they ignored the reality of Britain under the Conservatives. The Blairites wanted to believe that the electorate punish their predecessors for their misdemeanours rather than their crimes. The decline in education and the health service, the sale of the railways and the water authorities, had not been popular. The sale of public housing to it occupants was a key plank in Thatcherite policies. New Labour had decided it was popular and promised to leave it unchanged.

Individual greed was beginning to turn to anger as people realized that they had been cheated (many had believed that Blair needed to make concessions in order to win and that once victory had been achieved it would be back to traditional social democracy). Nothing was being done to alleviate their suffering. New Labour enthusiasts do not like to be reminded that between 1990 and 1996, a million people lost their homes through repossession by the mortgage companies, while 390,000 homes, once publicly owned, were seized by those companies. Come 2009 almost one million properties were estimated to be in ‘negative equity’: the homeowners had paid too much for them in the first instance and could not get their money back.

Thatcher had resolved to make Britain a nation of small businesses. This was the much vaunted ‘popular capitalism’. Yet by 1997, the year of Labour’s victory, personal bankruptcies had ‘stabilized’ at 22,000 a year; 30,000 companies had become insolvent between 1990 and 1997. The ‘flexible labour market’ so beloved by Thatcher, Blair, and the transnationals had, in reality, made unemployment a mainstream experience. In December 1997, it was estimated that one in five men and one in eight women had suffered at least one extended spell of joblessness in their adult lives. It is this insecurity that modern capitalism, which lives for the short term, values so greatly.

If one studies the actual performance of the US economy during the same period, one sees that the model to which Blair aspired was little short of disastrous. Assuming that productivity growth – the increase in output per hour – is the most useful single indicator to determine economic health and the key to increased wealth and a growth in wages, then the situation is bleak. Over the last twenty- five years, US productivity has grown by less than half of its average rate of increase during the entire previous century. It stands at a little over 1 per cent per annum, compared to 2.2 per cent between 1890 and 1973. This means that the output available to distribute to workers – assuming that the distribution didn’t change – grew half as fast as before.

On the level of wages, the picture is much worse. The distribution of income between rich and poor has polarized sharply. Since 1973, there has been a wholesale stagnation of wages. Real wages have been flat for the last quarter of a century. Today they are at approximately the same level as in 1968. By contrast, wages grew at an average annual rate of at least 2 per cent (often faster) during every single decade between 1890 and 1970, with no exceptions, not even the decade of the Depression – the thirties.

Nothing changed under Clinton. In 1998, the wages of the bottom 80 per cent of the labour force were lower than they had been in 1989, and significantly lower than in 1979. Simultaneously, the United States is the only major capitalist country where workers have actually had to increase the average number of hours they work each year, to above 2,000. This means that US workers labour more each year than the workers of any other Western country. They work 10 to 20 per cent more than Western European workers. Even the Japanese, usually top of the league in terms of working hours, sharply reduced this during the 1990s and are now working less on average than North Americans.

This is the famous trickle-down economics of neo- liberal fantasists. When we are told the US economy is flourishing, this is true, but only for the well-off. In the United States, 25 per cent of all children live in poverty. This number is double that of any other advanced capitalist economy, except one – Britain. Where elderly poverty is concerned, the United States scores 20 per cent, but in this field, at least, it has been overtaken by its British emulators: in England, 24 per cent of old people now live in poverty.

1) The process itself was described in fine detail (and with a novelist’s eye) in a set of excellent essays that first appeared in the London Review of Books and were subsequently brought up to date and published in book form. Private Island: Why Britain Now Belongs to Someone Else, by James Meek (London and New York, 2014), is essential reading for anyone wanting to understand what really has been happening in Britain and why it is in the dire state it is today.

- this is an edited extract taken from Tariq Ali's The Extreme Centre (Verso, 2015), currently 50% off as part of our UK Election reading list (until 8th May). See the full reading list and sale here.

'Who will protect, provide, shelter, build?' - James Meek on the questions that should be at the heart of the election, but are not being asked.

"Political leaders within the 1% promise to reduce inequality just before they gain power, but then increase it" - an extract from Danny Dorling's Inequality and the 1%