Costas Lapavitsas: "It's time to bite the bullet"

Ahead of Alexis Tsipras’ meeting with Angela Merkel tonight on the sidelines of the EU summit in Riga, we share an interview given on Monday by Costas Lapavitsas, Syriza MP and co-author of Against the Troika, in which Lapavitsas urges a Greek exit from the Euro. "If one finds himself in a trap is it a disaster to try and get out of it? Is it better to wait until death comes?" 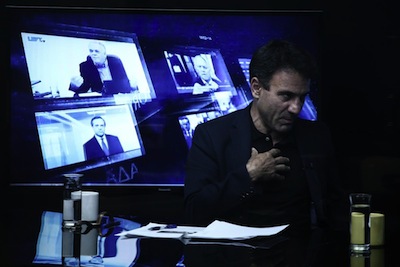 During a two and a half hour interview, the MP spoke, among other things, about the climate within SYRIZA's parliament team. He estimated that the number of those who are becoming more and more determined to dismiss a deal which would breach the government's limits, is growing.

Regarding the negotiation as well as the possibility of a mutually beneficent agreement, Mr Lapavitsas was adamant that even if the Monday leak of Mr Junker's proposal were to be true, it would only be buying some more time. He also said that it was necessary for the discussion about the viability of the debt to begin and, naturally, he also asked that the government move forward with exiting the Eurozone.

Attempting to answer G. Varoufaki's claim that if entering the Euro was, admittedly, a mistake it would be a disaster to abandon it, Mr Lapavitsas said that Greece has fallen in the Euro trap. "If one finds himself in a trap is it a disaster to try and get out of it? Is it better to wait until death comes?"

Mr. Lapavitsas spoke for Greece abandoning the Euro and said that the public opinion has been formed through exaggerations and a fear campaign. He didn't hesitate to accept that a Grexit would cause lots of problems but he rushed to assure that these would only last a few weeks.  In order for Greece to find what would be necessary for it to keep functioning the MP pointed out that there are international agreements which could come in effect (Iran and Russia were mentioned) and he stated that the main goal of a return to the national coin would be the reclaiming of its sovereignty.

Towards the end of the interview, Mr. Lapavitsas answered some of his personal critics by revealing that he has resigned from his post at London SOAS. He also said that he has debts in English pound and that he would be facing grave financial trouble should Greece decide to abandon the Euro.

More that 127,000 internet users watched the live streaming of the interview while #asklapavitsas trended first thus making the two and a half hours seem almost too short in order to answer more than 300 questions which were placed through the social media.

Costas Lapavitsas, former Professor of Economics at SOAS and current Syriza MP, is author of Profiting without Producing and Crisis in the Eurozone, and most recently co-author of Against the Troika, the first book to propose a strategic left-wing plan for how peripheral countries could exit the euro.