Alain Badiou: True and false contradictions of the crisis

We are told capitalism is in crisis, and that this crisis forces a choice: "the West or else barbarism". In the light of escalating fascism and ongoing war, the choice is made to appear all the more urgent. Yet, as Alain Badiou shows in his article below, this is a false contradiction that serves both sides and "blocks the advent of the only global conviction that could save humanity from disaster".

Translated by David Broder. The original French text is here. 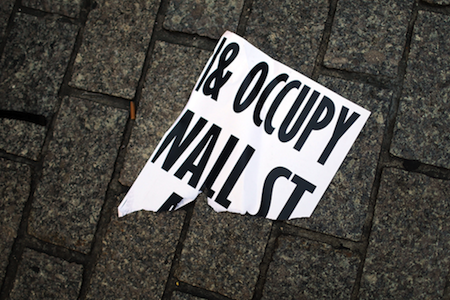 Modernity is first of all a negative reality. Effectively it is a break with tradition. It is the end of the old world of castes, nobilities, religious obligation, youth initiation rites, local mythology, the submission of women, the father’s absolute power over his children, and the official division between a small group of rulers and a condemned mass of toilers. Nothing can push this movement back—a movement that evidently began in the West with the Renaissance, was consolidated by the Enlightenment of the eighteenth century and then materialised in the unprecedented breakthroughs in production techniques and the constant refinement of means of measurement, circulation and communication.

Perhaps the most striking point is that this break with the world of tradition, this veritable tornado sweeping through humanity—one that in barely three centuries has swept aside forms of organisation that had lasted for millennia—creates a subjective crisis whose causes and extent are clear to see, and one of whose most remarkable aspects is the extreme and growing difficulty that young people in particular face finding themselves a place in this new world.

That’s the real crisis. Sometimes people think that this is a crisis of finance capitalism. No—not at all! Capitalism is expanding everywhere around the world—it is doing wonderfully. Wars and crises are part of its means of development. These means are as brutal as they are necessary for wiping out the competition and allowing the winners to concentrate the greatest possible quantity of disposable capital in their own hands.

Let’s remember where we’re at, from a strictly objective point of view—the concentration of capital. 10% of the world population owns 86% of disposable capital; 1% has 46% and 50% of the world population has exactly nothing, 0%. We can easily understand that the 10% that owns almost everything don’t want to get into the same situation as those who have nothing. In turn, a large number of those who share out the remaining 14% are burning with a fierce desire to hold on to what they’ve got. That’s why they often give their support—and racism and nationalism play a role here, too—to the countless repressive measures to build up a defensive wall against the terrible “threat” they see from the 50% who have nothing.

All this tells us that the Occupy Wall Street movement’s slogan “We are the 99%”, with its supposed capacity to unite people, is completely empty. The truth is that what we call the West is full of people who though not constituting part of the 10% that make up the ruling aristocracy, do however provide globalised capitalism with a petty-bourgeois support troop, the famous middle class, without which the democratic oasis would have no chance of survival. Indeed, far from being the 99%—even symbolically—the courageous young folks occupying Wall Street represented no more than a small clutch of people (right from the outset, indeed), whose fate was to vanish as soon as the “movement” party was over. Except, of course, if they managed to attach themselves in a lasting sense to the real mass of those who have nothing or really very little; that is, if they could trace a political diagonal between those who have some share in the 14%—particularly intellectuals—and the 50% of people who have nothing, first of all meaning workers and peasants, and then the lower, most precarious and worst paid layer of the middle class. This political journey is feasible—it was tried in the ‘60s and ‘70s, under the banner of Maoism. And it was tried more recently in the occupation movements in Tunis and Cairo, and even in Oakland, where there was at least the outline of an active connection with the dockers at the port. Everything, absolutely everything, defends on the definitive renaissance of this alliance, and of its political organisation at the international level.

But in the current situation—where such a movement is in an extremely weak state—the objective, measurable result of the break with tradition, taking place in a world structured by globalised capitalism, can only be what we have just been talking about, namely a miniscule oligarchy dictating its law not only to the crushing majority of people at the bare minimum level of survival, but also the Westernised—that is, vassalised and sterile—middle classes.

But what is happening at the social and subjective level? In 1848 Marx provided us with a striking description of this reality, one that’s infinitely truer now than it was in his own era. Let’s quote a few lines from a text that has remained incredibly young despite its old age:

The bourgeoisie, wherever it has got the upper hand, has put an end to all feudal, patriarchal, idyllic relations. … It has drowned the most heavenly ecstasies of religious fervour, of chivalrous enthusiasm, of philistine sentimentalism, in the icy water of egotistical calculation. It has resolved personal worth into exchange value … The bourgeoisie has stripped of its halo every occupation hitherto honoured and looked up to with reverent awe. It has converted the physician, the lawyer, the priest, the poet, the man of science, into its paid wage labourers

Here Marx is describing how the break with tradition—when this break takes a bourgeois, capitalist form—in reality opens up a gigantic crisis of humanity’s symbolic organisation. Indeed for millennia the differences inherent to human life were regulated and symbolised in a hierarchical form. The most important binaries, like old and young, men and women, inside and outside of my family, poor and powerful, my trade and others, foreigners and compatriots, heretics and the faithful, commoners and nobles, town and countryside, those who work by hand and by brain—were all addressed (in language, in mythologies, in ideologies, and in the established religious models) by recourse to ordered structures setting everyone’s place in a set of overlapping hierarchical systems. So a noble woman was inferior to her husband but superior to a common man; a rich bourgeois had to bow down to a duke, but his servants had to bow down to him; just as a squaw from this or that Indian tribe was almost nothing in the eyes of a warrior from her own tribe, but almost all-powerful in the eyes of a prisoner from another tribe, whom she might be deciding how to torture. And a poor follower of the Catholic Church mattered very little compared to his bishop, but could consider himself one of the elect as compared to a Protestant heretic, just as even the son of a freedman, wholly dependent on his father, could have a black man at the head of a vast family as his own personal slave.

The whole traditional symbolisation thus rested on an ordered structure that determined individuals’ places in society and thus the relations between these places. The break with tradition, such as capitalism as a general system of production realises, does not in fact propose any active new symbolisation, but only the brutal and independent play of the economy: the neutral, a-symbolic reign of what Marx called “the icy water of egotistical calculation”. The result is a historic crisis of symbolisation, and that’s where youth today suffers such great disorientation.

And faced with this crisis—which, under the cover of a neutral freedom, proposes no universal referent other than money—some would have us believe that there are only two possible solutions. Either to claim that it does not exist and could not exist, and that there is nothing better than this liberal “democratic” model of freedoms weighed down by the neutrality of market calculations; or else the reactive desire to return to the traditional—that is, hierarchical—symbolisation.

In my view both of these routes are extremely dangerous impasses, and their ever-bloodier contradiction is pulling humanity into a cycle of wars without end. That’s the whole problem of false contradictions, which forbid the true contradiction from playing out. This true contradiction—which must serve as the framework of our thought and action—is one that opposes two different visions of the unavoidable break with the hierarchising symbolic tradition. That is, the opposition between Western capitalism’s a-symbolic vision, which creates monstrous inequalities and pathogenic upheavals, and the vision that is generally called “communism”, which ever since Marx and his contemporaries has proposed to invent an egalitarian symbolisation.

After communism’s temporary historical defeat—with the failure of state socialism in the USSR and China—the fundamental contradiction of the modern world has been masked by a false contradiction. Faced with the break with tradition, a false contradiction is established between the neutral, sterile, pure negativity of the dominant West, and, opposed to this, a fascistic reaction, often dressed up in bastardised religious narratives, which offers a return to the old hierarchies, and to this end deploys a spectacular violence designed to mask its real weakness.

This supposed opposition serves the interests of both sides, however violent their conflict may appear. Helped by their control of the means of communication, they appropriate the general interest, forcing each person to make a false choice between “the West or else Barbarism”. In so doing, they block the advent of the only global conviction that could save humanity from disaster. This conviction—which I have sometimes called the communist idea—declares that even in the movement of the break with tradition, we must work to create an egalitarian symbolisation that can guide, regulate, and form the stable subjective underpinning of the collectivisation of resources, the effective disappearance of inequalities, the recognition of differences—of equal subjective right—and, ultimately, the withering away of separate forms of authority in the manner of the state.

So we must devote our subjectivity to an entirely new task: the invention, on a two-front struggle—as against the ruin of the symbolic in the icy waters of capitalist calculation, and against the reactive fascism that intends on restoring the old order—of an egalitarian symbolisation that restructures differences by making common rules into the prevalent ones, based on a total sharing of resources.

As far as we—people in the West—are concerned, we first of all have to engage in a cultural revolution: that is, we have to shake off the absolutely archaic conviction that our view of things is superior to anyone else’s. In fact our view of things is still very far behind the desires and foresights of the first great nineteenth-century critics of capitalism’s senseless, brutal inequality. These great forerunners also saw that the supposedly democratic organisation of politics, with its ridiculous electoral rituals, is merely the façade for the total vassalisation of politics by the higher interests of competition and greed. Today more than ever, we can see the sad spectacle of what these critics called—with their unsparing lucidity— “parliamentary cretinism”.

The mass abandonment of this “Western” identity, simultaneously combined with an absolute rejection of reactive fascisms, constitutes the necessary negative time within which we can affirm the power of our new egalitarian values. Not being the playthings of the false contradiction, and establishing ourselves in the real contradiction, will change subjectivities; it will finally allow them to invent the political force that will replace private property and competition with what Marx called “the free association”.

- Alain Badiou is author of Ethics, The Communist Hypothesis, and most recently The Age of the Poets.