I am the author of The Coming Insurrection 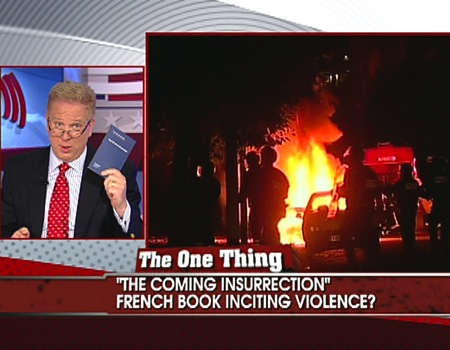 At the heart of the French authorities’ case against the Tarnac 9 group—who have been charged with terrorism—is the anti-capitalist pamphlet The Coming Insurrection, whose authorship the prosecutor has attributed to Julien Coupat. Intellectuals and writers from François Bégaudeau to Frédéric Lordon express their concern over a book becoming the centrepiece of a trial, and insist on the freedom to criticise capitalist society. From Liberation, 11 June 2015. Translated by David Broder.

The Paris high court has decided that criminal charges will be brought against eight people, three of them for terrorism, in the so-called "Tarnac" affair. This affair began some seven years ago with a spectacular operation that saw balaclava-wearing policemen descend on a "grocery store cloaked in shadow". The pugnacious defence of the accused, together with number of serious-minded investigations, have long made it possible for anyone to see that this was in fact a matter of the Sarkozy government of the day trying to make a statement. An operation that the police and the judiciary, supported by today’s ruling political figures, have had sufficient esprit de corps to keep alive. And these days, what kind of ruling power can do without anti-terrorism, even if only to pick up a brief burst of support in the opinion polls?

In the recent indictment, a supposed act of sabotage (1) that could not in any case have led to humans being injured, and would ordinarily be characterised as an "act of malice" has become an act seeking to impose an ideology "by intimidation and terror". In order to carry out this transmutation, the prosecutor drew on the book The Coming Insurrection, arbitrarily deciding that Julien Coupat is its "main writer" despite recognising that it is the fruit of a collective effort. This accusation was contrary to Coupat’s own repeated statements. For the magistrates the important thing is to create a supposed "leader" figure—that’s how difficult it is for them to imagine a political practice that can do without leaders.

No writer or reader of books can remain indifferent faced with these judges declaring themselves fit to stick their noses into the delicate work of writing. All the more so when we consider that the "intimidation of populations" is in reality the policy pursued by all those who use the blackmail of unemployment in order to impose social peace, and that the denunciation of "terror" is an ever-less convincing way of hiding the truly terrifying practices of the "democratic" armed forces in a number of operations abroad.

Before anything else, The Coming Insurrection is book criticising capitalist society—a debateable book, and one that has been debated. Freedom of democracy cannot be limited to the "right to blasphemy": if a political book becomes the centrepiece of a trial where the defendants are at risk of being sentenced to heavy prison terms, then that is irrefutable proof that this is indeed a political trial. But we have the right to say that it is necessary to transform the world.

We also have the right to say that, as was often the case in the past, and as the historical examples remind us, this transformation will probably not come about through a strict respect for the existing laws and rules. Treating whoever calls for revolution (or even speaks of its possibility) as a "terrorist" is a very bad sign. Anyway, doing so brought no better luck for Ben Ali or for Mubarak.

The Coming Insurrection is one expression (among many others) of a current of critique of capitalist civilisation. If its positions are debateable, even so they must be debated from the point of view of this multiform effort at criticising the old world. This is an effort with which I identify, and which does not belong to anyone.

That’s why I think it’s important to finally own up: the real author of The Coming Insurrection… is me.

(1) On the night of 7-8th November 2008, rebars were placed on overhead train lines, causing damage to a high-speed rail train. The French state accuses the Tarnac group of committing the act.