Appeal from Stathis Kouvelakis: "There is still time to avoid a fresh Greek tragedy" 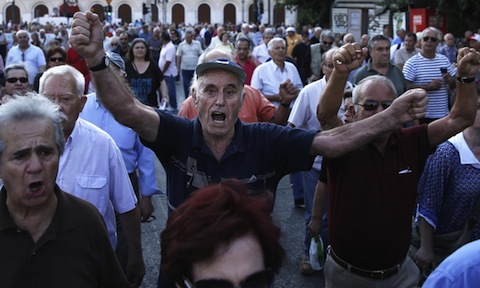 An appeal to all friends of the Greek people and to everyone who has stood by it for all these years:

Without doubt you will already have understood that something very serious indeed is now coming to pass. After the test of strength waged across the last several months, pitting the Troika of lenders against the Greek government – whose election represented an immense hope for all the forces fighting against austerity and neoliberalism in Europe – the Greek side is now in the process of giving in. The last set of proposals sent by Athens represented its acceptance of the fundamentals of the lenders’ demands. This is nothing less than a new plan for austerity, a new €8bn purge, the bulk of which will fall on the shoulders of employees and pensioners. Such a package of measures, which is on every point comparable to the potion that has been administered to the country without relent across the last five years, can only lead to further recession, unemployment and poverty. And this in a country that has already lost a quarter of its GDP in five years, where unemployment has struck more than one in four of the active population and where a third of people are living below the poverty line.

We will have to draw up a political balance sheet of the trajectory that has taken this government – which bore a popular hope that extended well beyond this small country’s borders – to the point at which we now find ourselves. But that is not the task of the moment. At this present hour, we must mobilise and exert pressure:

1) On the Greek government, as long as the agreement remains yet to be signed, such that does not commit an irreparable mistake. The Syriza government’s capitulation would have incalculable consequences for the progressive forces in Europe and worldwide – and we must make this message felt.

2) On the Syriza parliamentary group, such that its MPs do not vote through an agreement that on every point contradicts the mandate that the Greek people gave them less than six months ago.

I want to tell you that thousands of Syriza militants are fighting, and will continue to fight, in very difficult conditions, so that the people’s hope and the struggles of all these years are not squandered. Understand: significant social forces will not allow themselves to be misled by the onrush of propaganda that seeks to hide the reality and prepare the terrain for surrender and dishonour. All these forces are in vital need of international support. There is still time to avoid a fresh Greek tragedy, which can only be a tragedy for all the forces fighting and resisting in Europe and across the world. Stick by our side! Let’s keep up the struggle! NO PASARAN!