Bifo: “Let’s cancel the name of Europe in our minds and in our hearts” 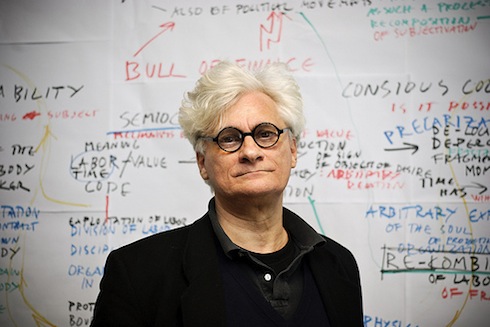 For the third time in the space of a century, Germany has destroyed Europe.

But we should learn some lessons from the experience of this bitter week. The first lesson is this: those who believe in the unity of Europe are losing. Those who despise the idea of Europe are winning. The Greeks have accepted misery and humiliation because they believe in Europe. The Germans have never accepted European solidarity; they have always been persuaded that the lazy southern scum are just after their money. Their refusal to accept responsibility for the migrants who come from the Mediterranean, their refusal to pay war compensation to Greece, and the violence against the Tsipras government are all evidence of their utter rejection of European solidarity. This is why they are winning.

We have to learn a lesson: let’s cancel the name of Europe in our minds and in our hearts.

The second lesson we have to draw is that the political Left is dead. The defeat of Syriza is the umpteenth proof of the impossibility of fighting financial capitalism in a democratic manner. The way of democratic elections has been barred by German acts of terrorism. The Spanish, the Italians and the Portuguese now know that voting Left is dangerous, because it’s exposing them to the violent retaliation of the Finazis.

In Italy as in France, the only alternative to this form of colonial financial oppression is nationalism: Lega Nord, Front National and UKIP are the only forces who have some credibility against the Finazis.

Now we can see, crystal clear, that the European Union implies simultaneously the enforced neoliberal disempowerment of labour and the colonial imposition of financial predation.

I know very well that hatred of the colonialists is fostering nationalism in the colonised nations. This has always been the limit of anti-colonial movements: the danger of being trapped within a national identification, and the inability to see that capitalism is the real source of colonialist oppression. Nevertheless, we cannot refuse to see that German economic nationalism is the oppressive force that impoverishes the colonised countries of Europe.

German nationalism is not like other nationalisms. It is based on an insensibility to the suffering of others, and on the absolute primacy of automated rule. The extermination of the dysfunctional is the essential feature of its cultural history.

We try not to see this simple evidence, and we say to ourselves: Schäuble and Merkel are not killing people. True, but we’ve not yet seen the last act of the tragedy—and anyway, don’t forget that suicide is skyrocketing in Greece, and that the Yugoslavian slaughter of the ‘90s was first of all the effect of German provocation. They don’t send the Schutzstaffel anymore. They send money, and some local Ustascia (or Golden Dawn?) will do the job.

The future of Europe is dark. What can we do?

As a comment on the Syriza defeat, in the beautiful web-magazine called Euronomade, I read the headline: “We’ll continue to fight.” Unfortunately these words sound pathetic. What do they mean, Euronomadic friends? What is the meaning of the word: “continue”? We have been unable to fight.

What did we do during the Greek martyrdom? Did we occupy German embassies? Did we destroy BMW shops? Did we organise mass strikes?

I did not see a fight in the streets of Italy and France. The saddest thing about the bitter week of humiliation has been the silence in the cities of Europe: impotence and depression. Why should we deny this simple truth? I think we had better accept the lesson of humiliation; we should start from this lesson, and build on it.

Firstly, the social movement has to think of itself as a military hospital (as Francis has said of the Church): creating spaces for self-healing, for care and for solidarity with the humiliated.

Secondly, we have to launch the powerful offensive of the disempowered: insolvency, withdrawal, abandonment of the political scene, and defeatism in the wake of the war that is already looming in every niche of the world.

And during the withdrawal, during the devastation that war is bringing about, we have to prepare the conditions for the communist aftermath.

Exiting Europe is impossible, as we have seen, because Europe is a well-guarded jail. The only exit from the European trap is the exit from capitalism.