"No, we do not want to catch up with anyone"—an extract from Frantz Fanon's The Wretched of the Earth

On the occasion of what would have been Frantz Fanon's 90th birthday, we share the conclusion of his famous The Wretched of the Earth, first published in 1961, in which he implores: "Leave this Europe where they are never done talking of Man, yet murder men everywhere they find them." 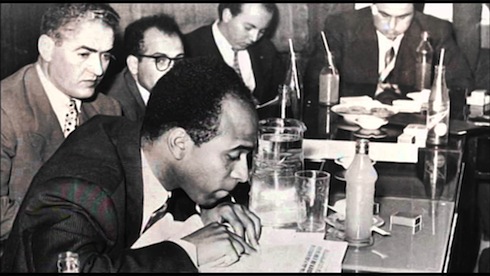 Come, then, comrades; it would be as well to decide at once to change our ways. We must shake off the heavy darkness in which we were plunged, and leave it behind. The new day which is already at hand must find us firm, prudent and resolute.

We must leave our dreams and abandon our old beliefs and friendships of the time before life began. Let us waste no time in sterile litanies and nauseating mimicry. Leave this Europe where they are never done talking of Man, yet murder men everywhere they find them, at the corner of every one of their own streets, in all the corners of the globe. For centuries they have stifled almost the whole of humanity in the name of a so-called spiritual experience. Look at them today swaying between atomic and spiritual disintegration.

And yet it may be said that Europe has been successful in as much as everything that she has attempted has succeeded.

Europe undertook the leadership of the world with ardour, cynicism and violence. Look at how the shadow of her palaces stretches out ever farther! Every one of her movements has burst the bounds of space and thought. Europe has declined all humility and all modesty; but she has also set her face against all solicitude and all tenderness.

She has only shown herself parsimonious and niggardly where men are concerned; it is only men that she has killed and devoured.

So, my brothers, how is it that we do not understand that we have better things to do than to follow that same Europe?

That same Europe where they were never done talking of Man, and where they never stopped proclaiming that they were only anxious for the welfare of Man: today we know with what sufferings humanity has paid for every one of their triumphs of the mind.

Come, then, comrades, the European game has finally ended; we must find something different. We today can do everything, so long as we do not imitate Europe, so long as we are not obsessed by the desire to catch up with Europe.

Europe now lives at such a mad, reckless pace that she has shaken off all guidance and all reason, and she is running headlong into the abyss; we would do well to avoid it with all possible speed.

Yet it is very true that we need a model, and that we want blueprints and examples. For many among us the European model is the most inspiring. We have therefore seen in the preceding pages to what mortifying set-backs such an imitation has led us. European achievements, European techniques and the European style ought no longer to tempt us and to throw us off our balance.

When I search for Man in the technique and the style of Europe, I see only a succession of negations of man, and an avalanche of murders.

The human condition, plans for mankind and collaboration between men in those tasks which increase the sum total of humanity are new problems, which demand true inventions.

Let us decide not to imitate Europe; let us combine our muscles and our brains in a new direction. Let us try to create the whole man, whom Europe has been incapable of bringing to triumphant birth.

Two centuries ago, a former European colony decided to catch up with Europe. It succeeded so well that the United States of America became a monster, in which the taints, the sickness and the inhumanity of Europe have grown to appalling dimensions.

Yes, the European spirit has strange roots. All European thought has unfolded in places which were increasingly more deserted and more encircled by precipices; and thus it was that the custom grew up in those places of very seldom meeting man.

A permanent dialogue with oneself and an increasingly obscene narcissism never ceased to prepare the way for a half delirious state, where intellectual work became suffering and the reality was not at all that of a living man, working and creating himself, but rather words, different combinations of words, and the tensions springing from the meanings contained in words. Yet some Europeans were found to urge the European workers to shatter this narcissism and to break with this un-reality.

But in general the workers of Europe have not replied to these calls; for the workers believe, too, that they are part of the prodigious adventure of the European spirit.

All the elements of a solution to the great problems of humanity have, at different times, existed in European thought. But Europeans have not carried out in practice the mission which fell to them, which consisted of bringing their whole weight to bear violently upon these elements, of modifying their arrangement and their nature, of changing them and, finally, of bringing the problem of mankind to an infinitely higher plane.

Today, we are present at the stasis of Europe. Comrades, let us flee from this motionless movement where gradually dialectic is changing into the logic of equilibrium. Let us reconsider the question of mankind. Let us reconsider the question of cerebral reality and of the cerebral mass of all humanity, whose connexions must be increased, whose channels must be diversified and whose messages must be re-humanized.

Come, brothers, we have far too much work to do for us to play the game of rear-guard. Europe has done what she set out to do and on the whole she has done it well; let us stop blaming her, but let us say to her firmly that she should not make such a song and dance about it. We have no more to fear; so let us stop envying her.

The Third World today faces Europe like a colossal mass whose aim should be to try to resolve the problems to which Europe has not been able to find the answers.

But let us be clear: what matters is to stop talking about output, and intensification, and the rhythm of work.

No, there is no question of a return to Nature. It is simply a very concrete question of not dragging men towards mutilation, of not imposing upon the brain rhythms which very quickly obliterate it and wreck it. The pretext of catching up must not be used to push man around, to tear him away from himself or from his privacy, to break and kill him.

No, we do not want to catch up with anyone. What we want to do is to go forward all the time, night and day, in the company of Man, in the company of all men. The caravan should not be stretched out, for in that case each line will hardly see those who precede it; and men who no longer recognize each other meet less and less together, and talk to each other less and less.

It is a question of the Third World starting a new history of Man, a history which will have regard to the sometimes prodigious theses which Europe has put forward, but which will also not forget Europe’s crimes, of which the most horrible was committed in the heart of man, and consisted of the pathological tearing apart of his functions and the crumbling away of his unity. And in the framework of the collectivity there were the differentiations, the stratification and the bloodthirsty tensions fed by classes; and finally, on the immense scale of humanity, there were racial hatreds, slavery, exploitation and above all the bloodless genocide which consisted in the setting aside of fifteen thousand millions of men.

So, comrades, let us not pay tribute to Europe by creating states, institutions and societies which draw their inspiration from her.

Humanity is waiting for something other from us than such an imitation, which would be almost an obscene caricature.

But if we want humanity to advance a step farther, if we want to bring it up to a different level than that which Europe has shown it, then we must invent and we must make discoveries.

If we wish to live up to our peoples’ expectations, we must seek the response elsewhere than in Europe.

Moreover, if we wish to reply to the expectations of the people of Europe, it is no good sending them back a reflection, even an ideal reflection, of their society and their thought with which from time to time they feel immeasurably sickened.

For Europe, for ourselves and for humanity, comrades, we must turn over a new leaf, we must work out new concepts, and try to set afoot a new man.

- Visit Marxists.org to read the book in full.

- For more about Fanon, explore the new and fully updated edition of David Macey's acclaimed Frantz Fanon: A Biography.