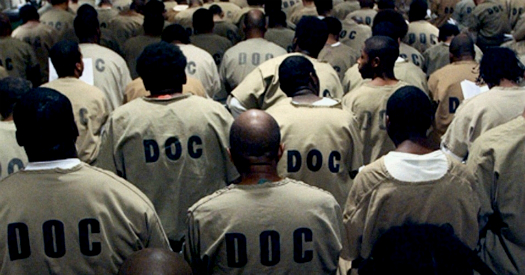 By James Kilgore, author of the forthcoming book, Understanding Mass INcarceration: A People's Guide to the Key Civil Rights Struggle of Our Era. This post was was originally published on CounterPunch.

In his most recent book, British writer Tariq Ali refers to a political phenomenon which he calls the “extreme center.” For Ali, this represents the convergence point where the established political left and political right unite behind a free market, pro-corporate agenda. Ali views this as the defining political feature of this era, both in Europe and the US. The convergence is more pronounced in most European countries where powerful trade union movements had historically amalgamated with Labor or Social Democratic parties. These combined forces were able to advance pro-working class, social welfare agendas that delivered national health plans, free mass education, enormous expanses of low-cost public housing and a general safety net that protected the poor and the unemployed from the miserable fate that awaits the marginalized in most US cities today. In Ali’s view, these working class-oriented parties stood on principles for which they were willing to fight. The dividing line between the conservatives and the welfarist parties was clear and, on most issues, irreconcilable. The answer to the question “which side are you on?” was unequivocal.

In the last three decades, especially since the rise to power of British Prime Minister Margaret Thatcher in 1979 and her crushing of the 1984-5 mineworkers strike, the official Left has melted into the extreme center. They may quibble with conservatives over small issues, fight over electoral seats and public opinion poll numbers but essentially both parties of the extreme center share the same overall “dream” – electoral democracy and a free market economy unfettered by high taxes and redistributive “madness.” The invisible hand of Adam Smith has replaced the clenched fist of solidarity. What Ali says about Britain seems almost universal: “We live in a country without an opposition.”

I read Ali’s book the same day President Obama made his path-breaking speech to the NAACP on mass incarceration. Like perhaps anyone who has spent years fighting the US compulsion to criminalize the poor and throw them into prisons and jails, my reaction combined joy, relief, disbelief and suspicion. Why now? Why on the heels of commuting the sentences of 46 people? Why when the parade of unlikely partners: Van Jones and Newt Gingrich, Rand Paul and Cory Booker, the Koch Brothers and the NAACP has already grown quite long? No real answer to those questions. Yes, the President arrived late to the party, but at least he came.

My graver concern, thinking about Ali’s theses, was not the why behind Obama’s speech but rather the possibility that the extreme center is hijacking the movement to reverse/eliminate/smash mass incarceration. As Ali so eloquently argues, one of the key tasks of the extreme center is to take center stage, to ensure that no alternative seems either reasonable or possible. For years, left-wing critics have framed the debate. Angela Davis, Ruthie Gilmore, Marc Mauer and, more recently, Michelle Alexander gave us the terminology to speak about all this: the prison industrial complex, abolition, non-reform reform and The New Jim Crow. Those notions are falling to the wayside now. Enter the discourse of gradualism and technicism: risk assessment tools, evidence-based solutions, and re-packaged justice reinvestment. Enter the institutions of carceral humanism: gender responsive jails, family friendly detention centers, mental health therapy complexes inside electrified fences. The extreme center is a change management force, like those corporate consultants who so glibly calm the waters of race, gender and class conflict by assuring everyone that we all share the same goals and we need to calm our anger and understand how the other side is feeling. They provide us with a new language to describe our problems, help us create a Facebook like world where everyone is our friend.

In terms of addressing mass incarceration, the extreme center will doubtless make some changes that will be very important, that will make a difference in the lives of thousands of people who have been slammed in the nation’s hellholes without a reasonable explanation or, in some cases, without even a legal justification. This will all be welcome. Every bill, every policy change that will get people out of prison, that will stop more prisons and jails from being built, that will soften the daily burdens of those held in Pelican Bay, Angola or Pontiac, that will re-direct resources away from corrections to communities is a positive. Absolutely. These changes are opportunities, windows not to be missed.

But let us not confuse the agenda of the extreme center with keeping our eye on the prize. All the sentencing reform that a thousand lawyers can draft will not get at the roots of the problem. For that we need more than across the aisle smiles and handshakes. That requires the voices of the people who have been directly affected by mass incarceration and mass criminalization, the youth of Black Lives Matter, the immigrants’ rights activists who have slowed deportations, the former prisoners and their loved ones who have battled to ban the box. But most of all that requires a fundamental shift away from the most cherished icon of the extreme center-the free market. Mass incarceration and mass criminalization don’t end until billions are ploughed back into the communities that have been devastated not only by imprisonment and over-policing but by a whole host of policies that have undermined social welfare and accelerated the inequality between the rich and the poor. To address this requires far more than sentencing reform and will take us far beyond the comfort zone of the handshakes and smiling faces of the extreme center.

James Kilgore is a writer and activist based in Urbana, Illinois. He spent six and a half years in prison. During those years, he drafted three novels which have been published since his release in 2009. His latest book, Understanding Mass Incarceration: A People’s Guide to the Key Civil Rights Struggle of Our Era will be published by The New Press in September.

He can be contacted at waazn1@gmail.com