40% off EVERYTHING!
about 1 month left
Janani Ganesan
comments

Summer's almost over now (sorry!) but lots of you still have your holiday's coming up. What better book to take away with you than one of our non-fiction graphic novels! Covering everything from gentrification to the IWW, CIA coups to Marcel Duchamp - we're sure they'll be something you'll love.

Verso author Paul Buhle will also be joining the fun, as he clues you into the history of graphic non-fiction as well as the current scene. Watch the Verso blog space for a sneak peak into our forthcoming graphic biography on one of the foremost theoreticians of European radicalism, Rosa Luxemburg. 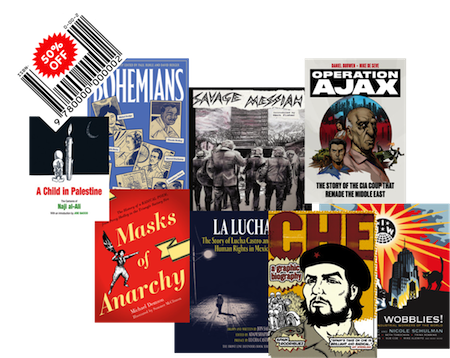 La Lucha: The Story of Lucha Castro and Human Rights in Mexico
by Jon Sack; Edited by Adam Shapiro; Preface by Lucha Castro

Despite a climate of fear, a small group of human rights activists, exemplified by the Chihuahua lawyer and organizer Lucha Castro, works to identify the killers and their official enablers.

This is the story of La Lucha, illustrated in beautiful and chilling comic book art, rendering in rich detail the stories of families ripped apart by disappearances and murders—especially gender-based violence—and the remarkably brave advocacy, protests, and investigations of ordinary citizens who turned their grief into resistance.
Operation Ajax: The Story of the CIA Coup that Remade the Middle East
by Mike de Seve

The year is 1953. As the value of oil skyrockets, global power brokers begin to take interest in the political regimes of the Middle East. Mohammed Mossadegh’s calls to overthrow the elites resonates among the people, and as rumors circulate of an impending revolt, American, British and Persian agents hatch plans of overthrow. Iran’s oil will flow, by any means necessary. Operation Ajax is the story of the CIA coup that removed the democratically elected Mossadegh and reinstated the monarchy.

Wobblies!: A Graphic History of the Industrial Workers of the World
Edited by Paul Buhle and Nicole Schulman

Bohemians: A Graphic History
by David Berger and Paul Buhle
The countercultures that came to define bohemia spanned the Atlantic, encompassing Walt Whitman's Brooklyn and the Folies Bergère of Josephine Baker, Gertrude Stein's salons and the Manhattan clubs where Dizzy Gillespie made his name. Edited by Paul Buhle and David Berger, Bohemians is the graphic history of this movement and its illustrious figures. The stories collected here revisit the utopian ideas behind millennial communities, the rise of Greenwich Village and Harlem, the multiracial and radical jazz and dance worlds, and the West Coast, Southern, and Midwest bohemias of America, among other radical scenes.

Masks of Anarchy: The Story of a Radical Poem, from Percy Shelley to the Triangle Factory Fire
by Michael Demson; Illustrated by Summer McClinton
Masks of Anarchy tells the extraordinary story of Percy Shelley’s poem “The Masque of Anarchy,” from its conception in Italy and suppression in England to the moment it became a catalyst for protest among New York City workers a century later.

This dramatic and extensively researched book breathes new life into Che's story, portraying his struggle through the medium of the underground political comic — one of the most prominent countercultural art forms since the 1960s. Spain Rodriguez’s powerful artwork illuminates Che’s life and the experiences that shaped him, from his motorcycle journey through Latin America, his rise to prominence as a leader in Fidel Castro’s revolutionary movement, his travels in Africa, his involvement in the insurgency that led to his death in Bolivia, and his extraordinary legacy.

A Child in Palestine: The Cartoons of Naji al-Ali
by Naji al-Ali; Introduction by Joe Sacco
Naji al-Ali grew up in the Palestinian refugee camp of Ain al-Hilweh in the south Lebanese city of Sidon, where his gift for drawing was discovered by the Palestinian poet Ghassan Kanafani in the late 1950s. Through his most celebrated creation, the witness-child Handala, al-Ali criticized the brutality of Israeli occupation, the venality and corruption of the regimes in the region, and the suffering of the Palestinian people, earning him many powerful enemies and the soubriquet “the Palestinian Malcolm X.”  For the first time in book form, A Child in Palestine presents the work of one of the Arab world’s greatest cartoonists, revered throughout the region for his outspokenness, honesty and humanity.

Red Rosa: A Graphic Biography of Rosa Luxemburg
by Kate Evans; Edited by Paul Buhle
A giant of the political left, Rosa Luxemburg is one of the foremost minds in the canon of revolutionary socialist thought. Red Rosa gives Luxemburg her due as a radical and human being. In this beautifully drawn work of graphic biography, writer and artist Kate Evans has opened up her subject’s intellectual world to a new audience, grounding Luxemburg’s ideas in the realities of an inspirational and deeply affecting life.