Gandhi vs Ambedkar: Annihilation of Caste

Joshua Paetkau questions the Western intelligentsia's practice of uncritically adopting Gandhi as the spiritual icon who bought India its independence, and he invokes Annihilation of Caste by B.R.Ambedkar to frame his argument. 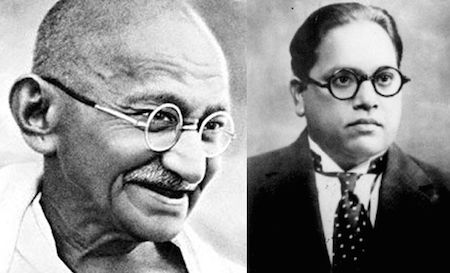 The republication, by Verso, of Ambedkar’s Annihilation of Caste, along with extensive annotations, a lengthy introduction by the activist and novelist Arundhati Roy, and Gandhi’s response to Ambedkar offers a perfect opportunity to reassess the legacy of Indian independence and those who helped shape it. This work looks deep into a muted side of Indian history, a part of that world that has been actively silenced and whose political agency has been and continues to be denied. The hard question of whether India’s Dalit population can actually depend on Gandhi’s legacy is confronted head-on. Perhaps the Mahatma never spoke for them, after all. This, in turn, confronts the Western ideals of political and moral greatness. Is it the benevolent and pastoral leader, who graciously extends his hands to the lower classes, while preserving the best of traditional culture and religion? Or should we relinquish this inspirational dream in favour of a more difficult and conflict-ridden one which strives towards the political determination of the oppressed?

Roy’s essay, really a short book in itself, is not for those short on nerve, or for those who prefer political expediency to the difficulties of truth-telling. It is a hard book to read, it is brutal and heart-wrenching. Roy faces head-on the chamber of horrors that Indian society continues to be for its most marginalized and despised peoples. It is a story of murder, rape, of people being stripped and paraded naked, and literally forced to eat shit. To face these horrors, and not be driven to despair or callousness, requires a greater moral imagination than the one which simply encourages individuals to “be the change they want to see.” Roy confronts not only the conflicts within Indian society, but also the indifference, ignorance, and hypocrisy of the West.