40% off EVERYTHING!
about 1 month left
Janani Ganesan
comments

Journalist Óscar Martínez is no stranger to putting himself in danger in order to uncover the corrupt practices in El Salvador. The author of The Beast and of the upcoming book A History of Violence, Martínez doesn't hesitate to uncover a story in the violent zones of Central America. Yet, he and his colleagues had to flee the country, following death threats feared to have come from drug gangs and the police alike, on the heels of an exposé they had published. In a Nation article, John Washington—co-translator of The Beast and Martínez's friend—contextualises Martínez's work in a region where the murder of journalists has been on the rise at an alarming rate. 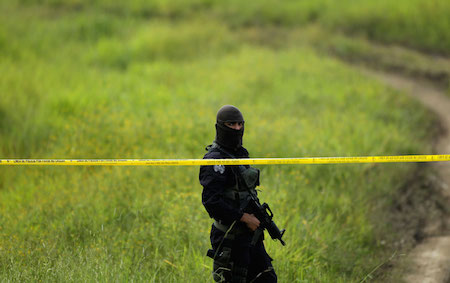 As Director of Sala Negra—a project focused on exposing the systemic problems behind the violence in Central America—Martínez has constantly faced hostility from the authorities; last year, the police forced him to take his shirt off and pointed a gun at him at a checkpoint.

As Óscar practices the sort of immersion journalism that puts him on the top of hurtling cargo trains, in rural towns run by corrupt narco-mayors, and in seedy brothels where women are trafficked, it would be hard for a friend or family member (he has a wife and a young daughter) not to be scared for his safety. Óscar is certainly no stranger to stirring up controversy: This May, he uncovered the intricacies of extortion that pervade central San Salvador, in which, 'five cliques of the Mara Salvatrucha gang and a sector of the Revolutionary wing of the Barrio 18 gang run the Centro' of El Salvador’s capital city.

Once, when at a police station trying to get the sources for his story released, Martínez witnessed unhesitating, chilling display of police brutality.

The officers, he (Martinez) explained to me, showed no compunction in punching and kicking the men in full view of the waiting room where he was sitting.

He also details how what the police did that day constitutes torture: 'The skinny 911 cop kicked [an arrestee] two more times. In the ribs. Crack. In the face. Crunch.' Later, another man was begging someone to 'throw water on his face' (The men had been sprayed with tear gas.) A cop countered with an offer: 'If you want, we can piss on you.' Desperate, the man cried back, 'Piss on me, piss on me.'

The death threats that Martínez and his colleagues received carried the force of this brutality. The story that led to them receiving the below threats exposed that a shoot-out by the police was in fact cold-blooded murder.

'I hope to God to capture one of the damn rats working for this paper,' wrote one user on El Faro’s Facebook page. 'Over in La Sultana [the neighborhood where El Faro has its offices] we gotta go machine-gunning,' another user wrote. 'I wish the members of El Faro were shot up,' went another. 'If you were in Guatemala, your offices would have already been burned down and you all would have been lynched.'

Despite the danger to their own lives, Martínez and his colleagues do not view the threats as isolated incidents but as part of the general violence and social breakdown in El Salvador.

Óscar made clear to me that these threats are not just a singular frightening incident, but 'part of the greater rotting of our society.' Roberto Valencia struck the same tone in an e-mail to me: 'I hope you don’t take this for false modesty, but I believe that these threats are no more than a few drops in the storm of violence that has been beating the country with particular virulence in the past couple months. We’re already the most violent country in the world and these types of threats against journalist[s] who are trying to do their job well [while reporting on]…thorny issues are just part of the story.'

Showcasing this outrageously brave commitment to exposing the truth in El Salvador, the three journalists are back in the country to continue their work. Martínez has been thinking of buying a gun, not to protect himself but to invite a less painful death.

If he were to be attacked, he (Martínez)  explained, he would pull out his gun and start shooting into the air. Better to be shot to death, his logic went, than to be tortured and suffer a slow death. He recently told me: 'In a society like [El Salvador’s], a gun doesn’t gift you life. It gifts you a certain type of death.'

To read John Washington's piece from The Nation in full, click here.

A History of Violence: Living and Dying in Central America, Óscar Martínez’s follow-up to The Beast, comes out in March 2016. For more on Martínez, click here.