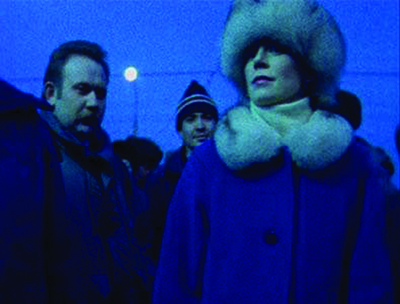 We were saddened to learn of the death of Chantal Akerman. Below is Jonathan Crary's consideration, from 24/7, of her 1992 film D'Est.

Chantal Akerman’s film D'Est (From the East), made in 1992 and early 1993, carries a heightened self-consciousness about the circumstances of [its] weighty historical moment. Shot mainly in Poland and Russia in the year and a half following the dissolution of the Soviet Union, it discloses a world in suspension, on the edge of an undetermined future, yet still weighed down by long-standing patterns and habits. Using very long takes, it is an extended portrayal of certain textures of everyday life, sometimes suggesting a Sartrean seriality. In her essay on D'Est, Akerman famously declared that she felt the need to make the film “while there’s still time” (“tant qu’il en est encore temps”). In one sense, she meant that she had to finish the project before it was too late, before cultural and economic forces transformed the subject of her work into something different, even unrecognizable. But, given the choices she made of what to record, “while there’s still time” is also a way of saying: while there is still a world of time-in-common, a world sustained by a collective inhabiting and sharing of time and its rhythms, in the older sense of the word “quotidian.”

Like many in the early 1990s, Akerman understood that the collapse of the Soviet Union and its hold on eastern Europe would facilitate the final globalization of the West and the implantation everywhere of its values and demands. Thus her film was made with an awareness of the fleeting interregnum it documented. Akerman realizes that the oppositions supposedly sustaining the bipolar Cold War world had become mostly illusory, but nonetheless she affirms that “the east” in her film retained singular and long-standing cultural forms that were on the brink of being obliterated by the expansion of Western capitalism. Even though Akerman cautions against any simplistic logic of before and after, D'Est is the testament of a social world, however damaged, prior to the imposition of neoliberal financialization, privatization, and social atomization. It is a film about living in a milieu where “there is still time,” before the 24/7 non-time of compulsory accumulation, of individual choice.

D'Est records journeys across territory, through seasonal time, from summer to winter. In ways that recall Arendt, the film also moves between crowded, collectively occupied public spaces and the very different textures of sheltered domestic spaces. But, more than anything else, D'Est conveys the time of waiting. It does this most compellingly in its extended tracking shots of people standing in line or waiting in railroad stations. Akerman shows the act of waiting for itself, without a goal, never disclosing why a crowd is formed into a line. As Sartre showed, the queue is one of the many banal instances in which the conflict between the individual and the organization of society is felt, but at the level of the unthought or unseen. Certainly, Akerman lets us see the queue as Sartre did, as a plurality of separations that become “the negation of reciprocity.” But one of her revelatory achievements is also to show the act of waiting as something essential to the experience of being together, to the tentative possibility of community. It is a time in which encounters can occur. Mixed in with the annoyances and frustrations is the humble and artless dignity of waiting, of being patient as deference to others, as a tacit acceptance of time shared in common. The suspended, unproductive time of waiting, of taking turns, is inseparable from any form of cooperation or mutuality. All the preceding decades of authoritarian rule had not nullified certain enduring features of community, in part because the brutal but crude forms of Stalinist discipline allowed many of the underlying rhythms of social time to persist unchanged.

The forms of control accompanying the rise of neoliberalism in the 1990s were more invasive in their subjective effects and in their devastation of shared and collectively supported relations. 24/7 presents the delusion of a time without waiting, of an on-demand instantaneity, of having and getting insulated from the presence of others. The responsibility for other people that proximity entails can now easily be bypassed by the electronic management of one’s daily routines and contacts. Perhaps more importantly, 24/7 has produced an atrophy of the individual patience and deference that are essential to any form of direct democracy: the patience to listen to others, to wait one’s turn to speak. The phenomenon of blogging is one example—among many—of the triumph of a one-way model of auto-chattering in which the possibility of ever having to wait and listen to someone else has been eliminated. Blogging, no matter what its intentions, is thus one of the many announcements of the end of politics. The waiting that one actually does now—in traffic jams or airport lines—acts to intensify resentment and competitiveness with those nearby. One of the superficial but piercing truisms about class society is that the rich never have to wait, and this feeds the desire to emulate wherever possible this particular privilege of the elite.