Sawant beat the establishment at its own game. Now comes the hard part. 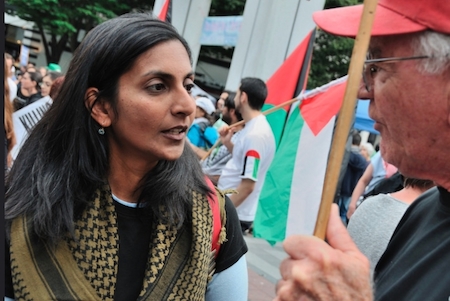 Read the original version here at In These Times.

The race between Seattle City Council Kshama Sawant of the Socialist Alternative party and her challenger, Seattle Urban League President and CEO Pamela Banks that attracted national attention and set records for nearly $1 million in funding was over before it began.

In August Sawant handily won a five-candidate primary, and Banks came in second after business interests had united behind her as their best hope to unseat the socialist who played the central role in Seattle’s $15 minimum-wage bill and is now taking on skyrocketing housing costs in the Emerald City.

As the first results trickled in on election night, November 3, showing Sawant leading 53 percent to 47 percent, Banks delivered the rote non-concession concession, “I am proud of the race that we ran,” and thanked three City Council members by name who coached her through her first race. Banks’ son, his eyes cast down, wrapped her in a full-body embrace as the enthusiasm of a few score supporters leaked out of a small coffee shop in the Capitol Hill neighborhood the two candidates were vying to represent.

Ballots are mailed to voters weeks before the election, so the final results won’t be announced until November 24. David Goldstein, one of the best local political handicappers, told me earlier he expected Sawant to get 52 to 53 percent, which would indicate she had it in the bag. He explained that with the campaign’s impressive ground game—which included more than 70 people door-knocking in a rainstorm days before the official vote—Sawant’s share would likely rise to the high fifties by the time all the ballots were counted.

The Sawant campaign and Socialist Alternative knew for two years the business and political class was hoping to oust her. In a wide-ranging election night interview with In These Times, Sawant said that when she was first elected in 2013, “The establishment didn’t take us seriously. They said, ‘What will a group of young radical socialists amount to? They won’t get anything done.’ We showed them the most transformative two years in Seattle politics.”

Sawant said accomplishments included the bill phasing in a $15 minimum wage by 2021, changing Columbus Day to Indigenous People’s Day, pushing the City Council to ask the state to lift its ban on local rent control to address Seattle rents that have Seattle rents have increased on average 80 percent since early 2010 and endorsing a move toward zero-percent incarceration of youth.

Sawant said when they began gearing up for the 2015 election, “I had no doubt the establishment would run a woman of color. It’s a tried-and-true tactic.”

Enter Pamela Banks. This was her first race, her platform was flimsy, but support and money came pouring in. To find out who would support Banks in one of the most left-leaning neighborhoods in a liberal city like Seattle, I attended her election night party. The crowd was evenly split between African Americans and whites, though there was little mingling among the two groups. Blazers, coiffed hair, cashmere and designer handbags were all well represented. I spoke to a retired economist, who confided with a grimace, “All my friends are with Sawant.” A retired professor interjected, “Me too, me too.” The economist added, “It’s scary, scary.”

A staffer with a major Seattle-area foundation said she told Banks, “You’re getting all this money because you are the anti-Sawant candidate.” A therapist who hosted a fundraiser for Banks at his house said Banks got enthusiastic backing from his wife because “she was very anti the opponent.”

Being the anti-Sawant was good enough to earn Banks more than $385,000 in campaign funds, a colossal sum for a novice in a local race. It also got Banks the endorsement from major media like the Seattle Times and, in an unprecedented move, backing from six of nine of the other City Council members. Banks was the darling of developers, restaurateurs, and corporate executives who were among the 200 donors that gave the maximum of $700 to her campaign.

A united corporate front couldn’t save Banks, however. But that may not have mattered to her as she earned points for being the sacrificial lamb. He said, “Speaking honestly, if Banks loses that was the expectation, … It’s a win-win for her. She got a lot of exposure, a lot of people embraced her. I think she has a real future.”

Sawant’s supporters said their biggest enemy was complacency. Everyone expected Sawant to win in November after she pulled 50 percent of the vote in the primary in which she and Banks advanced to the general election. Campaign volunteers said local unions that pulled out the stops for Sawant in the primary scaled back to mailers and phone banking in the general election, but did not deploy volunteers or staff in the field.

Despite elite support, Banks received only $43,000 in third-party independent expenditures, not the hundreds of thousands of dollars many expected to flood in against Sawant. It appears to have been an astute calculation as corporate money flowed to other races as a rearguard action. Business interests seem to have conceded the race against Sawant, focusing instead on preventing her from gaining more allies on the council.

Sawant’s triumph in 2013, and her role and that of Socialist Alternative in turning $15 Now from a slogan into law, inspired like-minded candidates to run for council seats as well. With most City Council positions now elected by district rather than at-large, as was the case with Sawant's previous election, all nine seats were up for re-election and three lacked an incumbent. Potential Sawant allies included Jon Grant, the former executive director of the Tenants Union of Washington State, who took on City Council President Tim Burgess, and Lisa Herbold, who was looking to succeed Sawant’s most stalwart ally on the council, Nick Licata, running against Shannon Braddock. More than $349,000 in independent expenditures surged behind Burgess and Braddock, helping propel them to comfortable leads after initial returns were announced election night.

Sawant said for the business community, “Their task was not only to try to defeat me but all the other progressive candidates as well. I think as a matter of strategy they focused their money on the Burgess-Grant race, who was very important for them to defeat.”

Such was the full-court press for Burgess he was also endorsed by the M.L. King County Labor Council. Sawant lamented organized labor’s failure to throw its weight behind all progressive candidates. “For decades the labor movement has been playing it safe, let’s not rock the boat, endorse the Democrats,” Sawant said. “The mistake we can make at this point is not to understand that working people don’t want to play it safe.”

That Sawant proved she was no fluke was a testament to her genuine appeal and Socialist Alternative’s organization. Behind the scenes at the victory party, even when Sawant was quietly conferring with an aide, all eyes were drawn toward her.

Banks' side recognized they were outmatched as well. A Banks supporter and former Washington State Legislator said of Sawant’s campaign. “The other side had a lot of foot soldiers. They had a lot of people in the trenches,” he said.

Sawant’s campaign mobilized over 600 volunteers, knocked on more than 90,000 doors, placed more than 170,000 phone calls and raised more than $450,000, with no money from corporate backers. It also engaged in a sophisticated voter ID operation, slicing up the Capitol Hill district into scores of blocs according to turnout and what percentage voted for Sawant in the August primary. The campaign then identified likely voters, ranked them on their degree of support for Sawant, and engaged them multiple times to turn them into votes.

It was a concrete example of how labor, when well organized, can beat capital. Banks' campaign expenditures were mostly on consultants and advertising, while Sawant’s went toward labor and literature.

Such intensive retail politics is a rare type of organizing experience for the radical left these days. Dozens of Socialist Alternative members from across the country decamped to Seattle to work on the campaign, with some volunteering for months. The Sawant campaign did not have to re-invent the wheel either. As part of the Committee for a Workers International, Socialist Alternative also drew on the membership and electoral experience of parties in other countries to assist them in organizing and executing a successful electoral strategy.

It was a brief respite before the next slog. Having lost her main ally, Sawant may be even more isolated on the council. But she still has big plans. In addition to not letting up on rent control or enforcing the minimum-wage bill—wage theft is still widespread in Seattle—Sawant wants to end “the Comcast cable monopoly” by pushing for municipal broadband, address the homeless crisis that has seen a 21 percent jump in the homeless count in only one year and enact a “millionaire’s tax” to improve Seattle’s ramshackle mass transit system. There are also plans for public rallies to encourage people to join Socialist Alternative as well as a conference in February 2016 “for a strategy for fighting the billionaire class.”

Sawant may get help in the future via an innovative ballot measure for clean elections that sailed to victory. It could shift the council away from a pro-business, pro-developer orientation as it limits campaign contributions and lobbying, and gives voters $100 in “democracy vouchers” that can be sent to candidates. The hope is to reduce the influence of money while increasing the influence of voters.

But for Sawant elections are just a means to the end of “building worker power.” By way of example, she points to how difficult the fight will be to take on Comcast. “Young people will see corporations like Comcast will not just back down. They will see how serious of a task it will be to build a movement.”

She rejects the role of saviour, however. She explained that in the case of the housing crisis, government has a vital role to play in cracking down on slumlords, passing a strong tenants rights bill and rent control, but the message is, “I’m not going to solve your problem, the message is, you need to get organized.”

If that happens, Seattle may become an incubator for 21st-century socialism.

Arun Gupta is a graduate of the French Culinary Institute in New York and has written for publications including the Washington Post, the Nation, Salon, and the Guardian. He is the author of the upcoming “Bacon as a Weapon of Mass Destruction: A Junk-Food-Loving Chef’s Inquiry into Taste” (The New Press).

Read the original version here at In These Times.

The "S" Word
by John Nichols 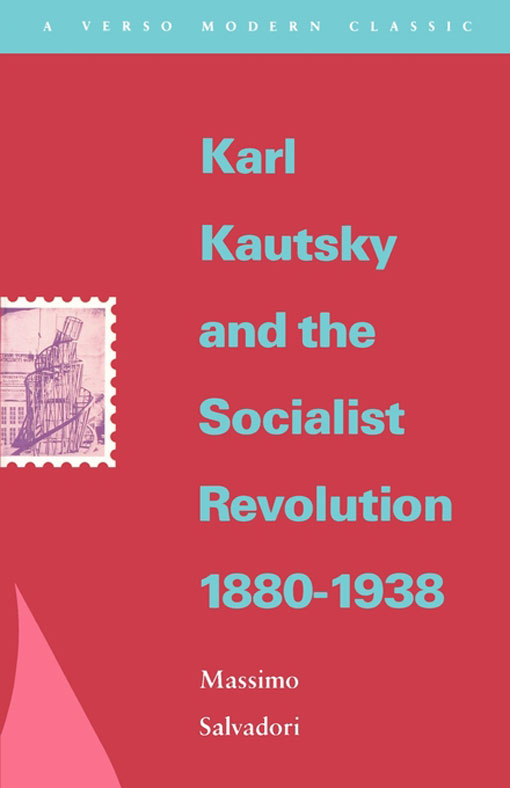 Karl Kautsky and the Socialist Revolution 1880-1938
by Massimo Salvadori 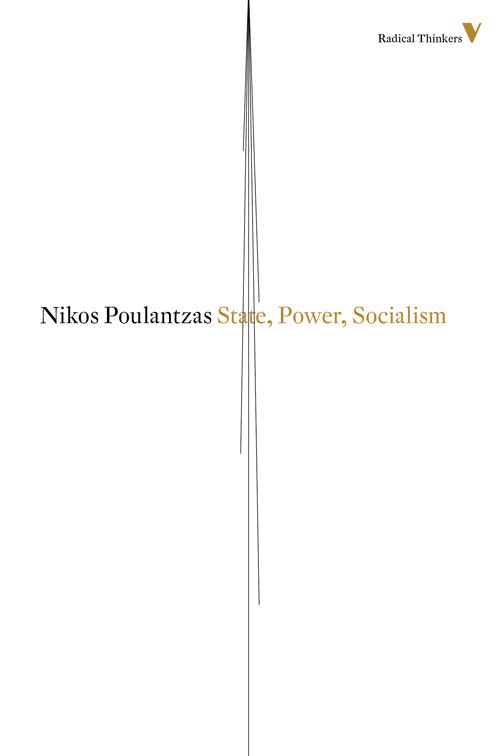 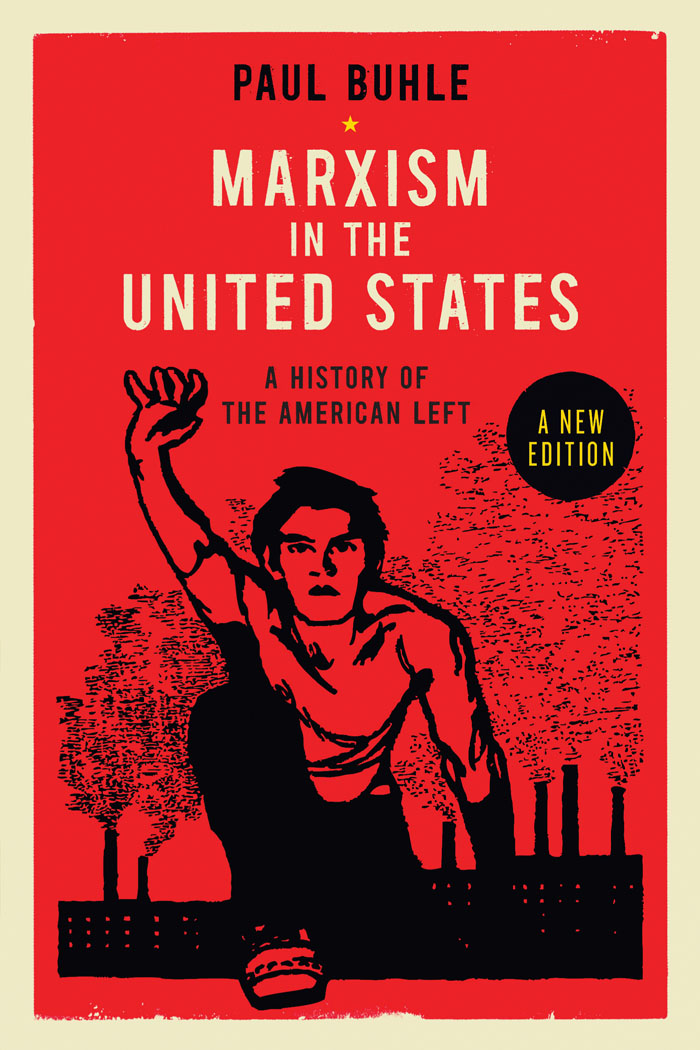 Marxism in the United States
by Paul Buhle