"The war was too complex & soulless to capture in a poem"—Geert Buelens' Everything to Nothing: The Poetry of the Great War, Revolution and the Transformation of Europe

On World Poetry Day, we present an extract from Everything to Nothing by Geert Buelens, the award-winning panoramic cultural history of the First World War, also known as 'the literary war'. Laying out a wide-ranging history of modernism's birth in the First World War, the conflict is seen from the point of view of poets and writers from all over Europe, including Rupert Brooke, Anna Akhmatova, Guillaume Apollinaire, Gabriele D’Annunzio, Vladimir Mayakovsky, Rainer Maria Rilke and Siegfried Sassoon.

Buelens examines also how nationalism and internationalism defined both the war itself and its aftermath, and the important role that poets played in defining the stakes, ambitions and disappointments of postwar Europe. The extract below details the events leading up to 11th November 1918. 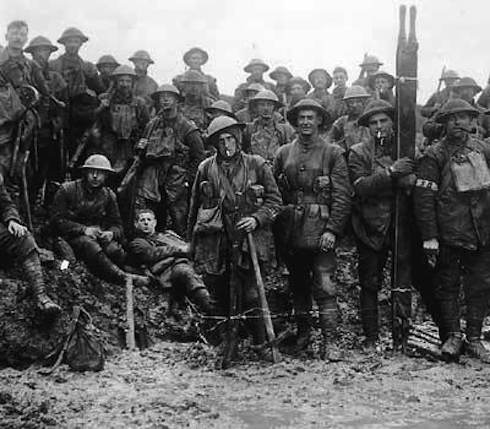 
For the first time, a negotiated peace was under serious discussion in German circles. Leaders in Berlin and Vienna tried to stop the dam from bursting by democratizing their institutions, but it was too late. On 24 October, the Italian army won a decisive victory in the Battle of Vittorio Veneto. It had given its utmost, realizing that with peace talks on the horizon, every morsel of occupied territory would count. A week later, revolution broke out in Vienna and Budapest – an ideal opportunity for the Italians to strike again. D'Annunzio addressed the troops on 1 November, giving a whole new meaning to this day of the dead with his own surprising version of the Lord's Prayer:

O dead who are in earth, as in heaven,
Hallowed be your names,
Your spiritual kingdom come,
Your will be done on earth.
Give our faith its daily bread;

Keep alive in sacred hatred, as we shall never deny your love.
Deliver us from every ignoble temptation;
Free us from every cowardly doubt,
And if necessary
We shall fight, not until the last drop of our blood,
But with you, until the last particle of our dust.
If necessary
We shall fight until Just God Comes to judge the living and the dead.
Amen.

That same day, the Serbians entered their capital city of Belgrade and the Entente troops reached the Danube. Two days later, Austria–Hungary asked for an armistice. By this time, there were strikes and mutinies throughout Germany. When sailors mutinied at a naval base in Kiel, not primarily for military or professional reasons but for democratic reform and peace, the death-knell seemed to be sounding for the German Empire. On 9 November, the Kaiser abdicated, going into exile in the Netherlands. Germany had played for high imperial and military stakes and now seemed to have lost everything. The fledgling German republic's delegation to the negotiating table was made up of civilians.

In this final stage of the war, the casualties remained staggering. Daan Boens survived a gas attack, but Gerrit Engelke (1890– 1918) was not so fortunate. He had made it through Verdun, the Somme, Champagne and Langemark, only to be fatally wounded in the British attack of 11 October. In 'An den Tod' (To Death) he had begged death not to take him until his life had been lived out. Apparently, that time came on 13 October. He died in a British field hospital. In July, he had completed his poem 'To the Soldiers of the Great War (In memoriam August Deppe)'. The union of war and lyricism had always struck him as highly problematic; the war was too complex and soulless to capture in a poem, unless it was presented as a 'time-dictated great and insanely bloody event'. In contrast, true culture was a by-product of peace, existing to serve and preserve that peace. Engelke simply could not comprehend how war could strengthen civilization, as the propagandists went on claiming. Pan-Germanist sentiment could not be expected from him. The only causes he wished to promote were peace and fraternity, and it was these ideals that animated his last major poem, a passionate appeal to soldiers of all countries, ranks and classes to come out of the trenches and throw aside their guns. Didn't they all have mothers; didn't they all love their wives? Hadn't they been together in Diksmuide; hadn't they reduced Ypres to rubble together? Didn't they all have their scars, cruel marks of a hopeless struggle? Hadn't they all lost friends, brothers, fathers?

Frenchman from Brest, Bordeaux, Garonne;
Ukrainian, Cossack from the Orals, from Dnjestr and Don;
Austrians, Bulgarians, Turks and Serbs;
All of you in the raging whirlpool of action and dying –
Britisher, from London, York, Manchester,
Soldier, comrade-in-arms, truly fellow human being and best of
men

It was the birth of a new world that Engelke proclaimed. He called his poem a psalm of peace, reconciliation and revolt. His contribution to civilization.

When the Entente struck on 28 September, Wilfred Owen was in the vanguard of the Fourth British Army in France. The advance was difficult and took a heavy toll, among both enlisted men and officers. On 2 October, Owen lost three stretcher-bearers in a row. He ordered his men to be especially cautious, although he himself could hardly be restrained. 'I came here to help these boys', he wrote to his mother two days later, 'directly by leading them as well as an officer can; indirectly, by watching their sufferings that I may speak of them as well as a pleader can'. Yet another major attack took place on 4 November. Again, the British encountered fierce resistance from the Germans, who managed to hold off the advance for the time being. The next morning, however, the British accomplished all their objectives – but without Wilfred Owen. He had been fatally injured on 4 November. The 5 November newspaper reported that he had been retroactively promoted to lieutenant. On 8 November the regimental journal reported that he had been awarded the Military Cross. Three days later, on the eleventh, the news of his death reached his mother by telegram.

Guillaume Apollinaire spent 1918 writing and working like a man possessed, but it seemed unlikely he would ever return to his old self. His lecture 'L'Esprit nouveau et les poetes' was delivered by an actor because of the poet's poor health. On 2 May he married Ruby (Jacqueline-Am.lia Kolb), whose praises he sang in 'La Jolie Rousse ' (The Pretty Redhead). It read like a combination of a love poem, a meditation on tradition and renewal, and a memoir of the war years. But most of all, he seemed to be saying farewell.

But laugh at me
Men from everywhere especially men from here
For there are so many things I dare not tell you
So many things you would never let me say
Have pity on me.

On 9 November, his strength utterly sapped by his injuries, Apollinaire succumbed to the Spanish flu.