This week's COP21 conference on climate change in Paris is being heralded by world leaders as a potential turning point in the Earth's ecological history. At the root of the consensus on the causes of climate change is a conception of man-made change that places humans, as an undifferentiated whole, as the cause of our current ecological plight. The solution which flows from this places the onus on small, ameliorative reforms (carbon trading, small decreases in omissions. etc). Yet, as Jason W. Moore argues in this extract from Capitalism in the Web of Life, to view climate change in this way naturalises inequalities, alienation and violence and lets the ultimate cause of the contemporary crisis, Capitalism, off the hook. 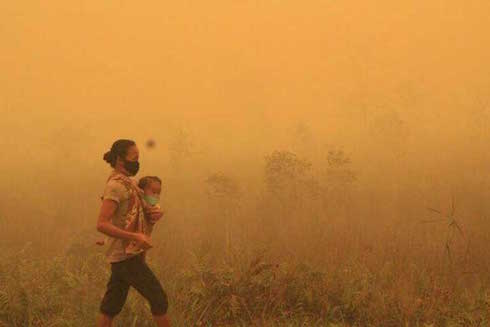 There is no denying the urgency that many scholars—and many citizens—feel in relation to climate change. There is little question about the pressing realities of climate change, the sixth great extinction of biodiversity, ocean acidification, and a long list of very, very serious problems. But does the urgency to communicate the realities of biospheric change override the need for an adequate historical interpretation of the problem? Conceptualizations of a problem and efforts to resolve that problem are always tightly connected. So, too, are the ways we think about the origins of a problem and how we think through possible solutions.

Over the past decade, one conceptualization has captivated scholarly and popular audiences alike: the Anthropocene. As with all fashionable concepts, the Anthropocene has been subject to a wide spectrum of interpretations.1 But one is dominant. This one tells us that the origins of the modern world are to be found in England, right around the dawn of the nineteenth century.2 The motive force behind this epochal shift? In two words: coal and steam. The driving force behind coal and steam? Not class. Not capital. Not imperialism. Not even culture . . . you guessed it: the Anthropos: Humanity as an undifferentiated whole.

The Anthropocene makes for an easy story. Easy, because it does not challenge the naturalized inequalities, alienation, and violence inscribed in modernity’s strategic relations of power and production. It is an easy story to tell because it does not ask us to think about these relations at all. The mosaic of human activity in the web of life is reduced to an abstract Humanity: a homogeneous acting unit. Inequality, commodification, imperialism, patriarchy, racial formations, and much more, have been largely removed from consideration. At best, these relations are acknowledged, but as after-the-fact supplements to the framing of the problem. This framing unfolds from an eminently commonsensical, yet I think also profoundly misleading, narrative: one in which the “human enterprise” is set against the “great forces of nature.”3 The taxonomy of “Anthromes”4—ecosystems dominated by humans, and consequently not “wild”—precedes historical interpretation, substituting highly linear notions of time and space for historical-geographical change. At the same time, Anthropocene scholars cannot escape the conclusion that humans, too, are a “geophysical force”—the singular is important here—that operates within nature.5 This is the “One System/Two Systems” problem common to Green Thought in its mainstream and critical expressions. Philosophically, humanity is recognized as a species within the web of life. But in terms of our methodological frames, analytical strategies, and narrative structures, human activity is treated as separate and independent: humanity becomes Humanity. There are “human constructions” and “natural” constructions6—even as humans are recognized as a geophysical force. This dissonance creates rather more fog than light, for the recognition of humanity-in-nature becomes a kind of philosophical cover for reductionist narratives of Humanity and Nature.

There are two major dimensions of the Anthropocene argument today. One is a strict emphasis on atmospheric and geological change and its proximate drivers. The other is an argument about history, and therefore about the crisis today. There is frequent slippage between the two. In the latter, the dominant Anthropocene argument goes beyond the domain of earth-system science, reaching into the very heart of historical analysis: the dialectically bound questions of historical agency and periodization.

The Anthropocene argument takes biogeological questions and facts— turning on the presence of variously significant stratigraphic signals7—as an adequate basis for historical periodization. Two subtle but powerful methodological decisions underpin this approach. In the first instance, empirical focus is narrowed to the consequences of human activity. In this, the Anthropocene argument embodies the consequentialist bias of Green Thought. The case for Humanity’s domination of the earth is constructed almost entirely on the basis of a significant catalogue of biospheric consequences. The drivers of such consequences are typically reduced to very broad “black box” categories: industrialization, urbanization, population, and so forth.8

The second methodological choice turns on the construction of humanity as “collective” actor.9 Here the historical-geographical patterns of differentiation and coherence are erased in the interests of narrative simplicity. This erasure, and the elevation of the Anthropos as a collective actor, has encouraged several important misrecognitions: 1) a neo-Malthusian view of population,10 ignoring the modern world-system’s patterns of family formation and population movement; 2) a view of historical change in which technology-resource complexes drive historical change; 3) a concept of scarcity abstracted from the historical relations of capital, class, and empire; and 4) a meta-theory of humanity as collective agent, without acknowledging the forces of capital and empire that have cohered modern world history.

The two principal framing devices—consequences determine periodization, the Anthropos as the driver of these consequences—stem from a philosophical position that we may call Cartesian dualism. As with Descartes, the separation of humans from the rest of nature—“Are humans overwhelming the great forces of nature?”11—appears as self-evident reality. In its simplest form, this philosophy locates Human activity in one box; Nature, in another. To be sure, these two acting units interact and influence each other. But the differences between and within each acting unit are not mutually constitutive, such that changes in one imply changes in the other. This dualism leads Anthropocene advocates to construct the historical period since 1800 on an arithmetic basis: “human activity plus significant biospheric change equals the Anthropocene.” In this, too, the Anthropocene perspective incorporates the common sense of Green Arithmetic: “Society plus Nature equals environmental studies.”

It all makes sense, again up to a point. But the parts do not add up to the whole. Human activity not only produces biospheric change, but relations between humans are themselves produced through nature. This nature is not nature-as-resource but rather nature-as matrix. It is a nature that operates not only outside and inside our bodies (from global climate to the micro-biome) but also through our bodies, including our embodied minds. Humans produce intra-species differentiations, which are fundamental to our history: inequalities of class especially, inflected by all manner of gendered and racialized cosmologies. Those differentiations have made human history—modern world history in particular—full of contingency and rapid change. They have not only produced non-linear shifts. They have also been produced by non-linear relations of power and wealth, already bundled with, and within, the web of life.

And it is here—in thinking through the origins of the problem of rapid and fundamental biospheric change—that we find the central historical, and therefore political, problem with the Anthropocene argument. If we shift our method from one that unduly prioritizes environmental consequences to one that prioritizes the producer/product relation, a very different view of the Anthropocene problem comes into focus. From this standpoint, the origins of a new pattern of environment-making began in the Atlantic world during the long sixteenth century. Why is this not “merely” a historical problem, but also a political one? In sum, to locate the origins of the modern world with the steam engine and the coal pit is to prioritize shutting down the steam engines and the coal pits (and their twenty-first-century incarnations.) To locate the origins of the modern world with the rise of capitalist civilization after 1450, with its audacious strategies of global conquest, endless commodification, and relentless rationalization, is to prioritize the relations of power, capital, and nature that rendered fossil capitalism so deadly in the first place. Shut down a coal plant, and you can slow global warming for a day; shut down the relations that made the coal plant, and you can stop it for good.

The erasure of capitalism’s early modern origins, and its extraordinary reshaping of global natures long before the steam engine, is therefore of some significance to our politics—far beyond the politics of climate change, and even beyond “environmental” politics. How we conceptualize the origins of a crisis has everything to do with how we choose to respond to that crisis. The question of how and when to draw lines around historical eras is therefore no small matter. Ask any historian and she will tell you: how one periodizes history fundamentally shapes the interpretation of events, and one’s choice of significant relations. Start the clock in 1784, with James Watt’s rotary steam engine,12 and we have a very different view of history—and a very different view of modernity—than we do if we begin with the English or Dutch agricultural revolutions, with Columbus and the conquest of the Americas, or with the first signs of an epochal transition in landscape transformation after 1450. Are we really living in the Anthropocene, with its return to a curiously Eurocentric vista of humanity, and its reliance on well-worn notions of resource- and technological-determinism? Or are we living in the Capitalocene, the historical era shaped by relations privileging the endless accumulation of capital?13

While still others argue, albeit weakly, for a post-1945/1960 periodization (J. Zalasiewicz, et al., “Are We Now Living in the Anthropocene?” GSA Today 18, no. 2 [2008]: 4–8). Empiricist concepts like the Anthropocene are often a conceptual and historical mess, precisely because they propose to engage reality as bundles of quantita- tive aggregates prior to discerning the actually existing historical relations within which such numbers can be given historical meaning. Adding up facts does not a historical interpretation make (cf. Carr, What is History? [1962]).

13  No doubt about it: capitalocene is an ugly word in an ugly system. The Age of  Capitalism does not merit an aesthetically pleasing moniker. (My thanks to Diana Gildea for the reminder.)