In conjunction with its publication of Herbert Marcuse’s 1973 Paris Lectures at Vincennes University, Heathwood Institute and Press shared Douglas Kellner’s afterword to the lectures, reproduced below. In celebration of the publication of these newly unearthed manuscripts Heathwood has shared a series of articles on the new book. Fans of Marcuse can look forward to his son Peter Marcuse's new book, In Defense of Housing, out from Verso Spring 2016. 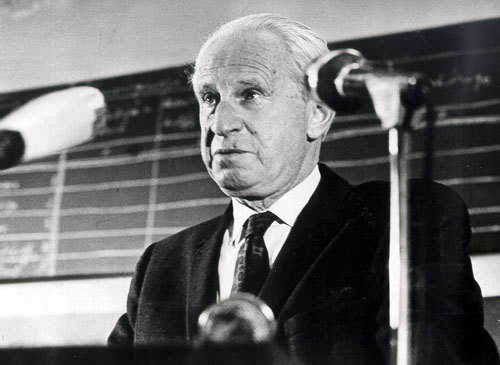 Herbert Marcuse’s Paris lectures at Vincennes University provide vivid examples of Marcuse’s power as a lecturer, radical intellectual, and revolutionary as he entered into the final decade of his life and work. Marcuse’s language is crisp and forceful as he articulates his critique of what he called “developed capitalist societies.” Throughout, he contextualizes his analysis in terms of the vicissitudes of contemporary capitalism and the forces of opposition and revolt. It is indeed striking to note the extent to which Marcuse’s analysis of the conditions of the mid-1970s was structured in terms of Marx’s analysis of capitalism and the concepts of class and radical opposition.

The lectures were divided into seven presentations in which Marcuse updates his analysis of contemporary capitalism, the political situation in the United States, and the prospects of the radical opposition and possibilities of revolutionary social transformation.

Marcuse opens his First Presentation by addressing “American society today” as an example of “the most advanced stage of monopoly capitalism,” which he explicates in Marxian terms and within his own focus on how contemporary capitalist societies on a global scale were developing advanced forms of scientific and technological rationality, an amalgamation of political, economic, and military power, and new forms of social control and domination. As with much of Marcuse’s writing in the 1960s and 1970s, he was concerned in the Paris lectures to provide descriptions of the contemporary configurations of power and forms of domination and social control in advanced capitalist countries, especially the United States where he was living and working, and which is the focus of these lectures.

The Paris lectures present Marcuse’s key ideas of the period in the context of 1970s political struggles, and indicate both continuities and shifts from his writings of the 1960s at which time he emerged as a radical critic and major advocate of revolutionary social and political change. The lecture format offers sharp presentation of many of his key theses, cogent arguments, concrete political examples, and a constant effort to relate his ideas to movements for radical social change. Yet the lectures also illustrate the Marcusean dialectic of analysing both forces of domination and liberation, indicating both hopes for radical social change and factors that illuminate the powers of a repressive social system.

The First Presentation immediately focuses on class and the class domination of the bourgeoisie which he interestingly associates with the Mafia on pages 2 and 25-26, pointing to criminal tendencies and scandals within the capitalist class and within the political class, as embodied in the Nixon administration which would lead to Richard Nixon abdicating the presidency during the Watergate scandal, the first forced resignation of a U.S. presidency in history. Interestingly, Marcuse talks of the “self-abdication of Congress in favor of the Executive Branch” pointing to the initial failure of Congress to confront Nixon on the emergence of the Watergate scandal and other disgraces of the day, or over the illegal and unpopular Vietnam war. The war, certainly, had been criticized for years by Marcuse and the radical opposition, and in the end Nixon did, of course, resign.

Yet at the same time, Marcuse stresses forces of integration and stabilization within contemporary U.S. society, marked in Marcuse’s view by the integration of the working class into consumer capitalism. Marcuse also points to the global reorganization of capitalism with new forms of imperialism and colonialism and apparent detente with the Soviet Union and China, which indicate Marcuse’s tendency to carry out a neo-Marxian analysis in the context of the current configurations of what we now call globalization. This global problematic was embedded in Marcuse’s work from the beginning of his emigration to the U.S. and work for the U.S. government and then universities, where he rose to renown as a world-famous intellectual and radical who frequently traveled the world and developed a global and cosmopolitan radical vision.

Marcuse was always alert to the most utopian possibilities for radical social change, even in the midst of situations of social repression, stability, and conformity, as well as the possibilities of societal crisis and collapse, a dialectic signaled in the Paris Lectures as he addressed “tendencies of disintegration and weakening,” and forces of radical opposition. Along with other writings of the late 1960s and early 1970s that discussed the vicissitudes of the New Left, counterculture, and new forces of opposition in the women’s movement, the black and brown radical movements, and the gay and lesbian movement, Marcuse addresses the unorthodox nature of the forces of radical opposition in comparison with the Marxian theory that valorized the industrial working class as the matrix of social change and upheaval.

The Paris lectures demonstrated how Marcuse had become a major figure in contemporary social theory and radical politics through his concern with concrete socio-political analysis and the prospects for radical politics in the contemporary moment. The lectures demonstrate how Marcuse was constantly updating his dialectical and critical social theory by presenting current statistics on the composition of the labor force, inequalities in wealth, and striking realities of poverty and unemployment in the so-called society of abundance (see especially Marcuse’s Fourth Presentation and Charles Reitz’s article that illustrates income flows and inequality in the contemporary moment [pp. 99ff]).

In the Second Presentation, Marcuse provides one of his most detailed and striking critical assessments of the concept of “the post-industrial society.” Marcuse convincingly argues that this ideological conception obscures the continued and intensified domination of contemporary society by the ruling class and covers over the ways that new forms of technology are developing new forms of social control and domination. He also argues that the functional rationality extolled by advocates of the post-industrial society occlude critical rationality, art, and the aesthetic-erotic dimension of human experience that Marcuse sees as essential to individual and social liberation.

While the Paris lectures contain key elements of Marcuse’s 1970s critical theory and radical politics, it is striking how many concrete examples Marcuse deploys, how close the lectures are to current debates and issues, and how relevant the text is to our contemporary situation. The lectures were delivered during a moment just following the 1968 global upheavals characterized by the emergence of the New Left, the counterculture, the women’s movement, ecology movement, gay and liberation movement, and other wide-spread, organized efforts of the day. These movements were of course resisted, and were under attack during the 1970s, yet they would continue to be militant forces for radical change to this day. The period was a violent one, and in the lectures Marcuse stresses how contemporary capitalism and imperialism unleash aggression and violence on a global scale, an explosion of destructive forces that continues in the decades of wars that have followed. Within the U.S. this is also evident in exploding gun violence and rampage killings that are a fundamental feature of our day.[1]

The lectures continue the utopian hope generated by the global upheavals of 1968. In our contemporary world the realization of the possibility of radical social change requires similar upheavals. Here, I would argue, the global tumult of 2011 shows the continuing relevance of Marcuse’s most radical ideas in the contemporary moment. In 2011, the Arab uprisings, the Libyan revolution, the U.K. riots, insurrections in Italy, Spain, Greece, and other European countries squeezed by neoliberalism, the Occupy movements and other political insurrections cascaded through the global media, seizing people’s attention and emotions, and generating complex and multiple effects that may make 2011 as memorable a year in the history of social upheaval as 1968 and perhaps one as significant.

In 2011, once more, as in 1968, multiple insurrections generated discourses of revolution. Intransigent and growing economic crises put global capitalism and its free market ideology in question, and multiple political uprisings against authoritarian and neoliberal rule made the year 2011 memorable and perhaps a turning point in history, in which popular insurrections become a constant factor in local, national, and global politics. In my book Media Spectacle as Insurrection, 2011: From the Arab Uprisings to Occupy Everywhere,[2] I discussed how in 2011 political insurrections emerged as media spectacles, and analyzed some of the political insurrections of the time from the Arab Uprising to the Occupy movements to indicate how political insurrection as media spectacle has played out in the United States and other Western and non-Western societies.

Consequently, I would want to argue that Marcuse’s thought is relevant to analyze the conservative counterrevolutions of the past decades, the military interventions, the rise of neoliberal capitalism and globalization in the 1990s, and various forces of domination that have emerged since Marcuse’s death. Yet I also want to argue that his concept of “the great refusal” and even revolution is still relevant.

By “revolution” I mean Herbert Marcuse’s concept of revolution as a totality of upheaval and overthrow of the previous social order that develops new forms of economy, politics, culture and social relations, involving a decisive rupture with the previous regime and an entirely different society with non-oppressive social relations and a new economy, polity, social institutions, culture, and subjectivities.[3] This concept of revolution is relevant to the insurrections of 2011―just as his concept of counter-revolution is also pertinent here as developments in Egypt, Syria, and elsewhere will attest.

Marcuse’s perspective on revolution is useful in assessing the insurrections of the contemporary era as it provides normative visions of a goal of total social transformation aiming at social justice and emancipation. In the past days, there have been discussions of Marcuse and the Occupy movements and how they provide anticipations of a new revolutionary political discourse and practice, that is compatible with Marcuse’s analysis of non-hierarchical and emancipatory social relations, direct democracy, and his mistrust of parties, hierarchies, and authoritarianism of any sort.

Hence, I want to evoke in conclusion the dialectic of liberation and domination as key to Marcuse’s thought and his continuing relevance―and to One-Dimensional Man where it first finds mature articulation. I have suggested in the above discussions how Marcuse’s ideas describe both tendencies toward domination and oppression and revolt and liberation, and that this dialectic is central to his thought.

The insurrections of 2011 suggest that the legacy of the 1960s, of which Marcuse was a vital part, lives on and the Great Refusal is still practiced by oppositional groups and individuals who refuse to conform to existing oppression and domination. Yet there continue to proliferate forces of domination, oppression and counterrevolution of the sort that Marcuse criticized and opposed throughout his life. Marcuse should be widely read and studied again to help nourish a renewal of critical thinking and radical politics. For domination continues to be a block to human freedom and happiness and liberation continues to be a hope for those who refuse the existing celebration of militarism, the forces of conservatism, and unrestrained capitalism. For, quoting Walter Benjamin at the end of One-Dimensional Man, “It is only for the sake of those without hope that hope is given to us.”