The Dignity of Chartism Reviewed 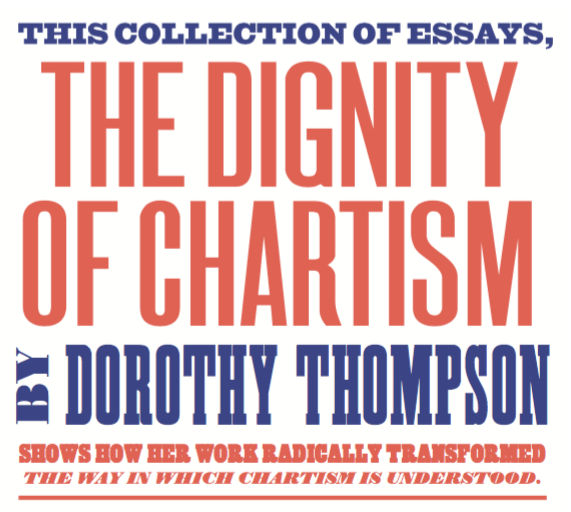 This is a major collection of essays on Chartism by leading social historian Dorothy Thompson, whose work radically transformed the way in which Chartism is understood. Reclaiming Chartism as a fully-blown working-class movement, Thompson intertwines her penetrating analyses of class with ground-breaking research uncovering the role played by women in the movement.

Throughout her essays, Thompson strikes a delicate balance between down-to-the-ground accounts of local uprisings, snappy portraits of high-profile Chartist figures as well as rank-and-file men and women, and more theoretical, polemical interventions.

Of particular historical and political significance is the previously unpublished substantial essay co-authored by Dorothy and Edward Thompson, a superb piece of local historical research by two social historians then on the brink of notable careers.

Since its publication, the book has received a number of favourable reviews:

"One of the Chartists’ most influential champions in late 20th-century scholarship...who combined an encyclopedic knowledge of the movement with an impassioned political vision of its significance...this volume is an admiring and useful...tribute to the life and work of an extraordinary historian."
- Kathryn Gleadle, tutor and fellow in modern history, University of Oxford, Times Higher Education

"Stephen Roberts...has done a great service for historians of nineteenth century radicalism in bringing this material together which he does with considerable aplomb in his introductory essay, a combination of personal reminiscences and historiographical analysis, and in the sureness of his editing.  This is volume that all historians of Chartism should read and provides further evidence, if any was needed, that Dorothy Thompson was the most important historian of Chartism in the past half century."
- Richard Brown, The Historical Association

"This is superb history ... Read Dorothy Thompson's marvellous book. Firstly, the book offers a master class in historical research and presentation. All Thompson’s conclusions are founded on broad and critical research of the primary evidence. Secondly, she brought to light the role of over-looked but important participants in the Chartist movement, with great sympathy and understanding, especially the role of women chartists."
- John Westmoreland, Counterfire

"This book shows just how much the terrain of C19th historiography changed under the influence, and indeed under the inspiration, of Dorothy Thompson."
- Malcolm Chase, Professor of History, Leeds University

The Dignity of Chartism
by Dorothy Thompson