In the wake of Podemos’ direct challenge to the two-party system in Spain, we have an exclusive extract from Pablo Iglesias’ Politics in a Time of Crisis: Podemos and the Future of Democracy in Europe. In it, Iglesias discusses Podemos’ success in challenging the dominant political and economic consensus in Spain while connecting wider audiences to political ideas too often barricaded in academia. 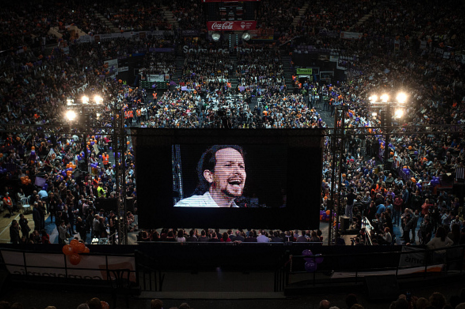 Phoning in to the one hundredth broadcast of La Tuerka, a web-based TV show devoted to political and social debate, Íñigo Errejón said that one thing the programme had achieved was to provide political ammunition for people engaged in the daily struggle for freedom. This has doubtless been our greatest contribution. Thanks to La Tuerka, a host of arguments and ideas, for years dismissed as too radical by the elites in the media, politics and academia, began to feature as common currency in political discussions. For the first time, despite all the difficulties and constraints, the left had its own talk show, and more importantly, from the outset, it avoided talking only to itself.

The context made our job easier, for sure. The economic crisis was beginning to undermine many of the dominant political consensuses, and a mass of indignant people began clamouring for weapons to wield on the ideological battlefield. Little by little and in its own style, our programme put arguments into circulation which angry citizens could use at their workplaces, in the bar, at the faculty or anywhere else. What’s more, our arguments were reaching beyond the most ideologized, committed sectors to empower an increasing number of ordinary people. Many of these, even if they didn’t espouse our ideas wholesale, began to borrow our reasoning and attitude as instruments for criticizing the present situation and advocating change. The sense of having founded a new style of political communication was immensely satisfying. Those of us who were also professional thinkers, as teachers or researchers, in universities or independent, were particularly delighted by the programme’s success since it meant that our modest labours were no longer merely in aid of our careers in academia, with no impact beyond its walls, but were giving back to society some of what we had received from it in our training. As one of the best living Spanish historians, Josep Fontana, has pointed out with barbed wisdom, the great majority of academic articles are never cited even once; their sole purpose is to maintain the publications quota of their authors, who don’t expect anyone to even read them.

We were keen for our intellectual work to transcend the academic arena, and La Tuerka made that possible. On the other hand, working in the field of social science – especially with the extra fillip of a salary or scholarship grant – gives you a head start when it comes to decrypting the keys to the political and economic situation, rather like a fireman is better equipped than most to put out fires (and to light them as well). The trouble is that while everybody agrees on the usefulness of firemen, that’s not the case for professional political thinkers. We had felt immensely frustrated by this. Lacking an ‘organic intellectual’ (Gramsci’s term for ‘the party’, which adds up to much more than an administrative structure for contesting elections), we were trapped within academic walls that cut us off from society, and by a left, the Spanish left, that was badly weakened by both infantile and senile disorders. This situation was aggravated by a painful awareness of how the great political-ideological issues were being thrashed out in the media, where we had no voice at all. La Tuerka was invaluable for enabling us to fight on this terrain, precariously and with considerable difficulty, but with a reach that never ceased to expand from the first moment.

Gradually we grew bigger and better, and before long our message was finding echoes even in the private media empires, once they realized that our ideas and our way of putting them forward had a positive effect on ratings. It makes a real difference to the contest of ideas when activists like Ada Colau, Alberto Garzón, Xosé Manuel Beiras, David Fernández, Diego Cañamero or the analysts on La Tuerka can speak their minds on television or the Internet. Although the world of the media is spiked with perilous contradictions that must be handled with care, the media wars are waged by their own rules and one must vie for hegemony on the terrain of ideas. Regular appearances on some of the most watched political talk shows in Spain made me realize how much people with a critical awareness – of whom there are more and more – were in need of cogent arguments, explanations, ideas that could help them understand the world they live in, ideas to reaffirm their indignation, to answer back with, to make them feel part of a community that wants to change things. When someone comes up to me in a bar, a supermarket car park or the street to thank me for confronting the pundits who until recently had it all their own way, when they tell me that I’ve put into words what they think, or have said just what they’d always wanted to say, I feel we ’re doing something that really counts.

The word ‘caste ’, used to describe the thieves who erect political frameworks for stealing democracy from the people, has taken hold in the Spanish political lexicon. Today we can cheer the pathetic spectacle of the political architects of the crisis pleading through crocodile tears, ‘I’m not of the caste.’ [Politics in a Time of Crisis], a modest enough set of divulgative notes, aspires to continue with this work of supplying political ammunition for public use. In it I have collected, ordered and reformulated the insights that have come up on La Tuerka and Fort Apache, in discussions with friends and comrades, in debates in the trenches of enemies and semi-allies, in articles and in the introductory pieces to my programmes over the last few years. Across its four chapters I have attempted to reflect on a number of political notions, on the history of our country and on the economic crisis that has prompted, in my judgement, a crisis of the regime.

Slavoj Žižek observes that ‘today, the ruling ideology endeavours to make us accept the “impossibility” of radical change … of a democracy not reduced to a corrupt parliamentary game’. Politics in a Time of Crisis is intended to help combat the ideology of those who deny the possibility of political change.