Óscar Martínez, director of the Salvadorean investigative journalism project, Sala Negra, has been reporting extensively on the northern triangle of Central America — Guatemala, Honduras, and El Salvador —  and exposing the systemic causes of the violence there since 2011. His forthcoming book, A History of Violence: Living and Dying in Central America, tells the story of the more than 1,000 refugees who leave the region everyday to attempt to enter the United States. As the current wave of ICE raids authorized by President Obama deports Central American refugees, it is essential to understand why for many Central Americans of the northern triangle, returning home is a death sentence. The following is excerpted from A History of Violence. 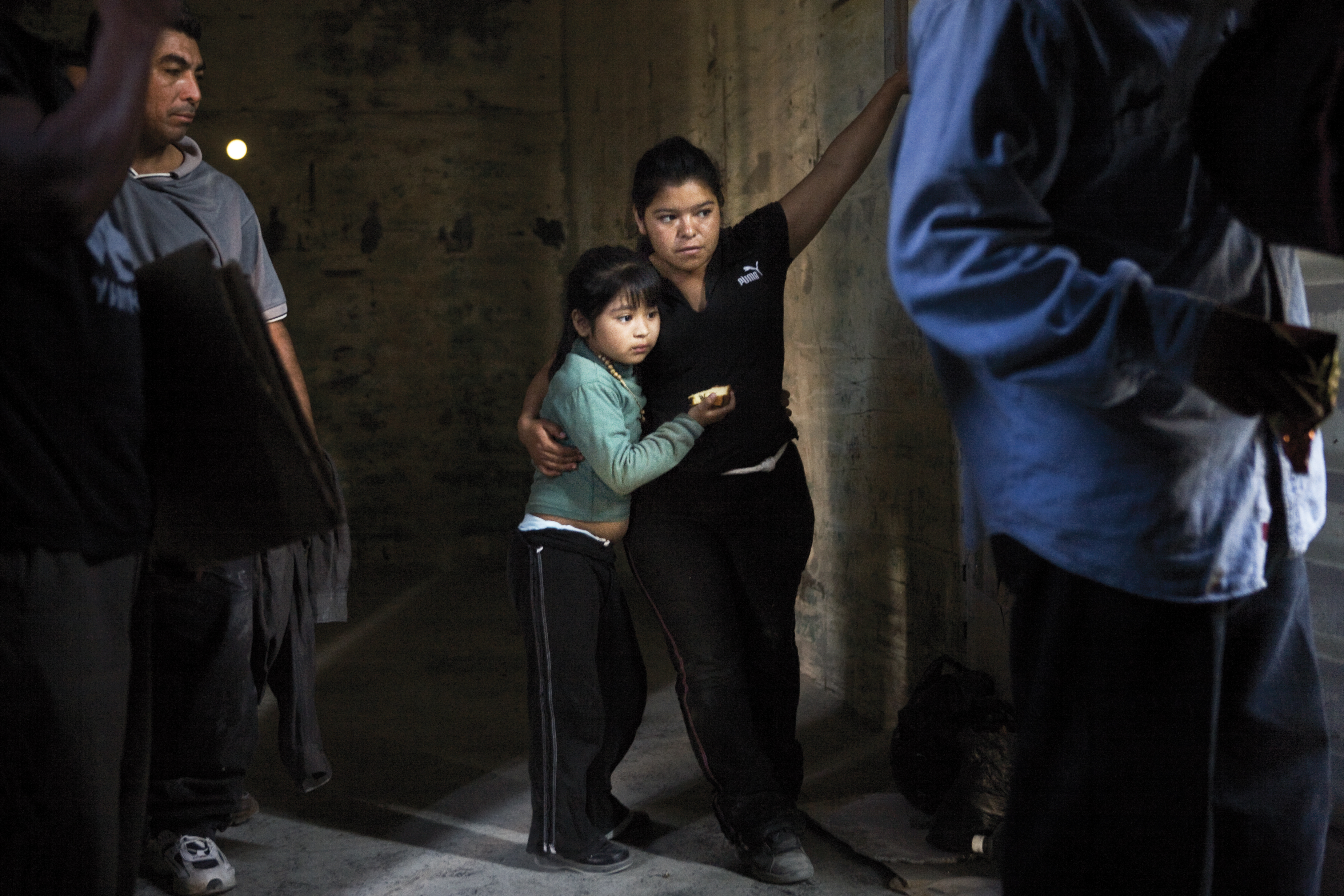 Photo by Toni Arnau, elfaro.net. From the forthcoming A History of Violence.

Since October 2013 I’ve traveled to many cities presenting The Beast, the book I wrote about the migrant trail from Central America to the United States. In these talks and presentations I’ve come to understand—or at least I believe I have—that those of you outside of Latin America are very rational when it comes to reacting to these types of stories. In Latin America, the questions I most heard were along the lines of “Was I scared to be riding the train?” Or “Did anything bad ever happen to me?” Or “Which story affected me most?” Outside of the region, the most common question was “What’s your solution?”

It made me realize how infrequently journalists ask themselves this. What can I propose to bring an end to these terrifying stories? It’s a deceptive question, because there is no real answer. There’s nothing I can suggest that will prevent women being raped on the Mexican migrant trails tomorrow; nor is there anything I can do so that the young Salvadoran boy fleeing his country for yours turns around. I can’t make him go back. I definitely can’t bring safety or dignity to the place he has abandoned. Journalism only has one method of boring into reality, and it is the same method that the sea uses against the coast: the constant lapping of the waves, whether they are gentle or turbulent.

So, what is my reply to this insistent question? My response is that you should realize what is happening, that you should know more, that you should understand what these people are living through. I want you to be transported by your reading to a barrio ruled by Central American gangs. You need to listen to an indigenous man from the Petén jungle and confront the mother of a boy murdered by Los Zetas. My suggestion is that you realize what happened to a woman who was sold into sex slavery as she tried to reach your borders—or, depending on how you want to see it, as she tried to flee from my country. My proposal is that you know what is going on. Because I believe that knowing is different to not knowing. I believe that knowing, especially with people like yours, who know how to wield politics, is the beginning of a solution. I believe, sticking with the metaphor of the sea and the rock, that knowing is what moves the waves. You can be one of the waves.

Having got that straight, I want to respond to a question I expect to hear when I present this new book somewhere near you: Why should people read this? Here is my reply.

First, I think you should read it because it is about people who surround you. This book isn’t about Martians. It doesn’t chronicle the tragic life stories of distant, faraway people living in the wilderness, without the Internet, eating nothing but millet. It doesn’t discuss people you will never see up close or see only on television. This book is about the lives of people who serve you coffee every morning. It tells the stories of people who cut your lawn and fix your plumbing. These lives are very similar to the lives of about six million people living in your midst. It tells the story of the more than 1,000 human beings who every day leave the three northern Central American countries to try to enter, without permission, the United States and other countries of the North.

Second, you should read this book because the broken puppet that we are as a region was mostly armed by American politicians. This is a book about the most murderous corner of the world. In Guatemala, Honduras, and El Salvador we have suffered an epidemic of violence for years. It has been established that if a country suffers from a disease that affects ten out of every 100,000 inhabitants, this country is experiencing an epidemic. By that standard, Central America is gravely sick. In the last five years not one of these three countries has averaged fewer than thirty-two murders for every 100,000 inhabitants. In El Salvador, the ratio is more than eighty. This month, the epidemic has been particularly bad, raging in a country of only 13,000 square miles, home to 6.2 million people, and yet averaging twenty-three murders a day. By comparison, during the sixteen-year Civil War, which ended in 1992, the average murder rate was sixteen. Today’s violence makes nonsense of the words “war” and “peace.”

Our society is a cauldron of oppressive military governance, the result of a failed peace process. We’re living with government corruption and incompetent politicians. We are living with violence, with death always close at hand: in a traffic accident, a soccer brawl, or in defense of your family. We are ignorant of peace. We haven’t had the chance to get to know it. We are a corridor for the transit of drugs. We are also their consumers. We are a poor society, and poorly educated, with public schools that flood and hospitals that induce nausea. We are a society with a minimum monthly wage you could earn working a single day as a day laborer in Los Angeles. We are unequal: there are families in Central America, though very few, that could live with the rich and famous of Miami; and there are families, tens of thousands of them, that can’t always put food on the table. There are families, you can count them on one hand, who have their own private jets; and there are families, tens of thousands of them, that don’t have electricity or running water. We are all of this. And we are also something more.

We are also the product of certain American politicians who tried to settle the Cold War in this small part of the world. I don’t need to elaborate—the evidence abounds. But whoever doesn’t believe me should type into Google the words “School of the Americas.” Or “Iran-Contra Affair.” Or “Miami Six.” Or “Ronald Reagan Central American Millions Military Aid.”

There’s a lot you can type in to get the same result. We didn’t just live through our own war here. We lived through your war. Or at least your politicians’ war.

We are also the product of your politics of deportation and national security. In May 2015, El Salvador was hemorrhaging, straight from the aorta: that month was the deadliest of this century, and this June is on track to outdo the 635 murders recorded in May. The response of the authorities is that this is the result of the recrudescence of the war between rival gangs, or between the gangs and the state. For most of us, these gangs are part of our everyday life. That’s why we don’t ask anymore how this started, why they are growing so quickly. We only ask how to survive. And it’s understood that survival takes precedence over anything else.

But these gangs—La Mara Salvatrucha, Barrio 18, Mirada Lokotes 13—weren’t born in Guatemala or Honduras or El Salvador. They came from the United States, southern California to be precise. They began with migrants fleeing a US-sponsored war. And, in fleeing, some of these young men found themselves living in an ecosystem of gangs already established in California. And so they came together to defend themselves, and they established a name, and now this name is what we call our fear: Mara Salvatrucha, Barrio 18. By the end of the 1980s and the beginning of the ’90s, a few experts, a member of Congress, and a president came up with a stupendous idea about how to get rid of these problematic gangs. With the logic of an ape, they decided the problem could simply be booted to the other side of the border. They acted like a scared child who closes his eyes in the hope what frightens him will simply disappear. It was in these years that about 4,000 gang members, all with criminal records, were deported. They were sent to countries at war. Those 4,000 are now 60,000, just in El Salvador. The experts, the congressman, that president didn’t have a clue what circular migration was. They spat straight up into the sky. Today these gangs are thriving both in Central America and in the United States.

Everything that is happening to us is tangled up with the United States. We can’t untie ourselves. Some of the stories in this book show just how knottily we’re tied together.

A History of Violence: Living and Dying in Central America is divided into three parts: Emptiness (or the absence or disinterest of the state); Madness (what is festering in the emptiness); and Fleeing (the only option for many desperate people). Within these three sections are the fourteen chronicles that, working as a journalist for elfaro.net, I researched and wrote from 2011 to 2015, all set in the northern triangle of Central America, this terrifying little corner of the world.

Last, I believe you should read this book for one simple reason: for the sake of humanity. I want you to understand what thousands of Central Americans are forced to live through. Then you can understand why they keep coming, and will continue to come, despite having to leave their families behind, despite having to cross Mexico, despite the wall and the Border Patrol, despite the crazy hunters of men who stalk the borderlands, and despite the difficult life waiting for them as undocumented people.

There are probably other hooks I could use to get a reader’s attention. I could, for example, tell you to read this book because every one of the fourteen chapters mentions, multiple times, the United States. I could explain that a few of the stories discuss California and Texas. But I prefer to simply say that my response to the question What is the solution? is the following: It’s up to you. The solution is up to you. The crisis will be solved when people understand, and worsens when they don’t. It’s that simple. And it’s that complicated.

This piece is adapted from the preface to A History of Violence: Living and Dying in Central America, which comes out in March 2016. Óscar Martínez's first book published in English, The Beast, came out in 2013.