"Who is behind this man?"

Anabel Hernandez, author of Narcoland: The Mexican Drug Lords and Their Godfathers recently sat down with Denise Dresser to discuss the capture of El Chapo Guzmán and its broader implications on a global scale. The following are excerpts from their conversation, translated from Spanish. 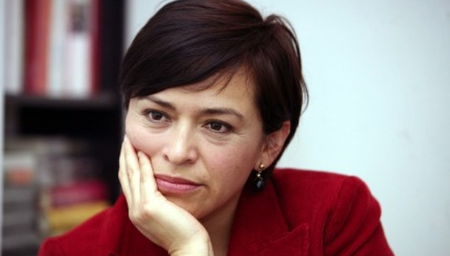 Well first, I think we need to contextualize the capture of El Chapo Guzmán. Upon hearing [Secretary of the Interior] Osorio Chong’s press conference Friday, I felt that this festive sort of tone was absolutely inappropriate. The government wants to sell us the story that El Chapo Guzman’s capture is a great victory, when it seems to me it’s far from that. Not long ago, in February of 2014 the government captured El Chapo Guzman…[he] was never truly neutralized. He turned, in a short period of time, El Altiplano [maximum security federal prison] where he’s since been returned, into his second home. Practically an office where he could continue on with personal affairs, with Cartel affairs. He could speak to his lawyers several hours a day, he’d see his mother, he’d see his women and his daughters, he spent his time getting haircuts and in therapy. So really, we can suppose that the time it takes to secure extradition for El Chapo Guzmán, if it’s even secured, will be a vacation for El Chapo Guzmán, as it’s happened in the past. The capture…means neither the end of the Sinaloa Cartel, nor the end of El Chapo Guzmán.

She goes on to present a portrait of El Chapo starkly at odds with the mythology that has evolved around him:

At the end of the day, for the first time people can see the real scope of Joaquin Guzman Loera, of his personality, and they can understand, I believe, what I’ve written about for a long time now, that El Chapo Guzman is not a complex man- he’s very primitive. He is a criminal who only studied up to the third grade. He’s not capable of articulating big ideas, according to the people who met him in the Penal de Puente Grande; he appears not to have evolved much. And I say this with regards to my investigations, and calling upon what anyone can see today, in the video of the raid… at the end of the day El Chapo is not able to elaborate on many ideas, because he isn’t a man of ideas. What arises here is the question that I’ve wrestled with across the fifteen years of my investigation: who is behind this man? Who managed that a man of his intellectual capabilities could become such a Capo, the most important narcotrafficker of all time, as the DEA would say? And the answer is this: it’s the web of corruption that surrounds El Chapo. That mass corruption; the police, the military, the politicians, municipal presidents, families of ex-presidents; it is a cloaca of complicity…”

Denise Dresser expands on this web of complicity:

I think that El Chapo is an infant of the State, created by the State proper, because the State protects him, after two escapes and multiple attempts to re-apprehend him, it seems to me that he’s an administrator of the Mafiosi republic. A republic that has allowed this man to grow in the face of its anti drug campaign, the war on drugs which Felipe Calderon himself declared failed, and based on a state where the authorities during the years he was captured and after his escapes, did not impose judicial prosecution against his network of associates, against his business enterprises, nor politicians associated with him. There hasn’t been a clear policy of combatting money laundering – this is why I say it is a creature that the state conceived of stemming from a failed war on drugs, from an institutionalized corruption not being addressed at its core, and a pact of impunity that remains intact to this day. The president pats himself on the back, he’ll tell us “mission accomplished”, when Mission Accomplished would really mean striking at the root of the problem, at the networks that allowed El Chapo to turn into the most wanted, most powerful, and most intimidating criminal on earth.

The full interview [Spanish] can be accessed at Aristegui Noticias.