News From Nowhere: The co-operative bookshop run by women

News From Nowhere is a radical independent bookshop in Liverpool. Since 1981 the shop has been run as a women's co-operative—a not-for-profit community business. To celebrate International Women's Day we share a profile of News from Nowhere by Combined Academic, which is featuring the shop as its March bookshop of the month. 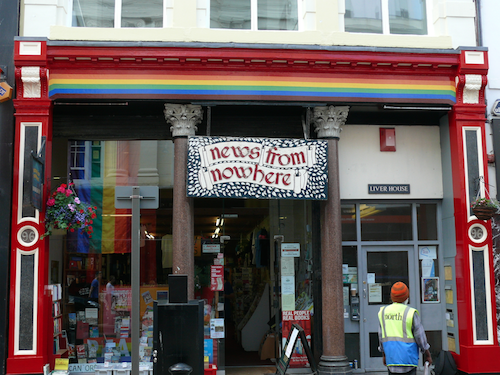 Our name comes from the 1890 novel by artist and utopian socialist William Morris.  We started back in 1974, so the shop is 42 this year.  Our founder Bob Dent came back to Liverpool with his partner, Maggie, after being involved with student protests at the LSE. Revolutions were taking place around the world, and there was an appetite for change.  Bob decided to set up a radical bookshop in Liverpool because it didn’t have one at the time. 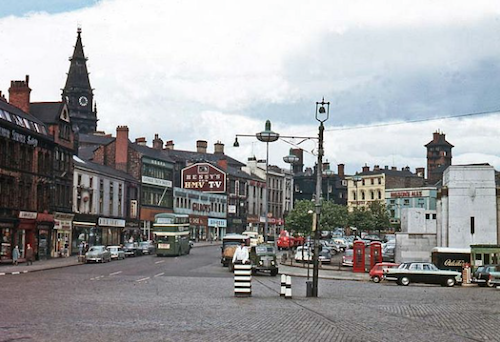 - News from Nowhere’s first site was in Manchester Street, featured here in 1964 (from Streets of Liverpool)

During the late 70s and particularly the early 80s we were subject to a lot of attacks, which were very difficult to deal with. The shop was set on fire numerous times, people were physically attacked. It’s hard to describe what the mood was like–  there was the miners’ strike, Thatcherism, Greenham Common,  and here in Liverpool what were commonly known as the Toxteth riots, although we prefer to call them uprisings. Conflict was everywhere, and Liverpool was very, very poor. These are the circumstances in which fascism thrives. The people involved in the attacks were young misguided men who wanted to feel part of something, a gang that gave them meaning. 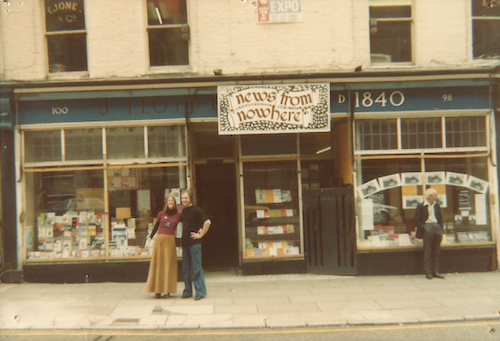 We supported the Miners’ Strike – for example we had the Coal not Dole mugs and we held collections in the shop – we had strong links with the campaign against the Falklands War, and links with the local black community during the Toxteth uprisings. Although we were subject to violence, there was a great feeling of solidarity as well.  We had a lot of support from other radical booksellers  – together we were a strong network and a big voice in the book trade – and so we survived. 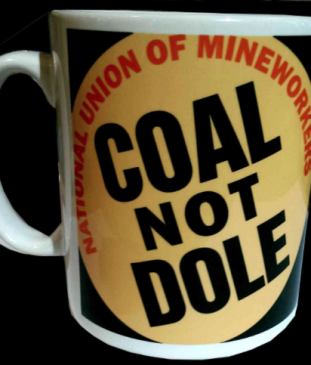 Bob left in the early 80s and we consciously decided to become a women’s co-operative. We all have a £1 share in the business. All the members are workers and all the workers are members. We stick by the principle that if you do a day’s work you’re working just as hard, whether you’ve been here a week or 40-odd years, and so we should all be paid the same.  Everybody who works here has an equal say in the business, and there are no bosses.  Years ago we used to rotate all the roles, so that one week someone would do the book ordering and the next week it would be another person, but as we grew bigger we started to specialise a bit more, for example in ordering or accounts. We all do some of the cleaning, serving on the shop floor, the routine jobs. It’s still important to us that we’re a women’s collective. Generally we’re much more supportive of each other, and although we have our conflicts they’re not based along gender lines.

We’ve been in four different locations. We started off in a tiny little shop close to the tunnel that goes through to Birkenhead, and then moved to bigger but more dilapidated premises around the corner. Bookshops could survive back then in tiny little backstreets, and people found their way to us –  Liverpool’s radicals, libertarians, anarchists, members of the early women’s movement and what was called the gay liberation movement. In 1989 we moved to the street where we still are now. 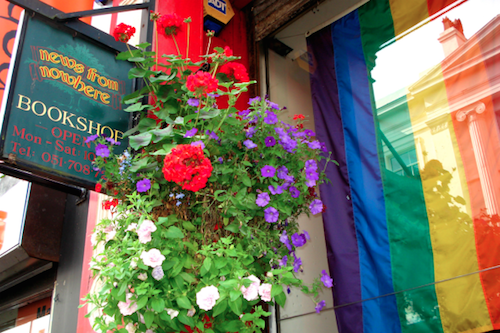 - Outside News from Nowhere

We’re in the bohemian end of town, on the route in from Liverpool 8, which has traditionally been the most multi-cultural part of the city. Chinatown is just around the corner, and there are large Somalian and Arabic communities down the road. There are a lot of international shops and places to eat locally, a Fair Trade shop, an independent cinema. We are the street of independence. When you’re in Bold Street you know you’re in Liverpool. If you’re in Liverpool 1, with its big new shopping development, you could be anywhere.

Over the years, a lot of independent bookshops have closed because of rising rents and corporate bullying by a certain online retail giant.  The fact we now own our building has helped us survive, along with the commitment of our team, and Liverpool’s general bolshiness.

As a radical bookshop our raison d’etre is to supply books about the nature of the world and how to change it for the better.  For example our children’s area is stuffed with multi-cultural books, books about different kinds of families, books that tell history from an alternative point of view.  We want books that are meaningful and reflect the realities of children’s worlds as they are now, not as they were back in the 1950s and 60s, so we won’t stock any books that have traditional themes. The Tiger Who Came to Tea, for example, even though it was one of my children’s favourites, is not our kind of stock, as Mummy is at home in an apron and Daddy comes home from work and sorts out all the family’s problems. We take that same approach to all our stock, so we definitely don’t stock Fifty Shades of Grey. When it was topping the bestseller lists, we had a display about domestic violence and a sign up explaining why we weren’t stocking it. News from Nowhere was taking a stance on the book and the fact it centred on an abusive relationship.

Often the book trade lacks principles. It works solely on commercial grounds.  But we think carefully about all the books we stock. We’re open to all kinds of progressive ideas, so in that sense we’re broad, but we’re also very particular. We don’t stock books just because they’re best sellers, although we have a whole wall jam packed with quality literary fiction. Virtually every book in this shop we could tell you why we’re stocking it. 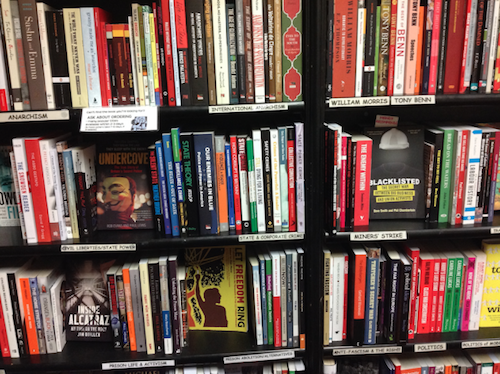 There are so many good books, books that open your mind, we never struggle to find stock. We love authors like Chimamanda Ngozi Adichie, Marge Piercy, Ursula Le Guin. Non-fiction is actually our bestseller. Last year Owen Jones’ books topped the list, and he was only overtaken in December by the Jeremy Corbyn Colouring Book. People need a bit of light relief. We’re under relentless attack. 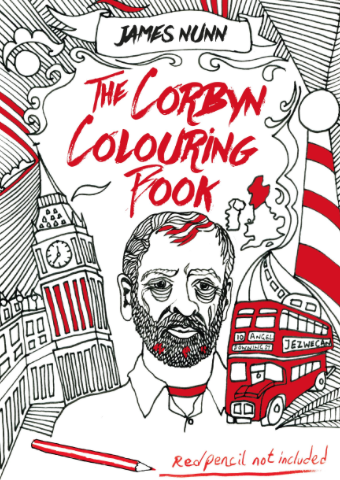 Books that might seem quite niche tend to appeal in a place like this, where our customers are looking for something outside of the mainstream.  At the moment people really like Ta-Nehisi Coates Between the World and Me, which is a critique of race in America, and Claudia Rankine’s prose poem Citizen: An American Lyric, which won the Forward Prize. On our front tables at the moment we have the big names like Owen Jones, Jon Ronson, Matt Haig, but amongst those we have Fred Bower’s Rolling Stonemason, republished recently by Merlin Press, which is a book about a socialist stone mason in Liverpool who worked on the Anglican cathedral. 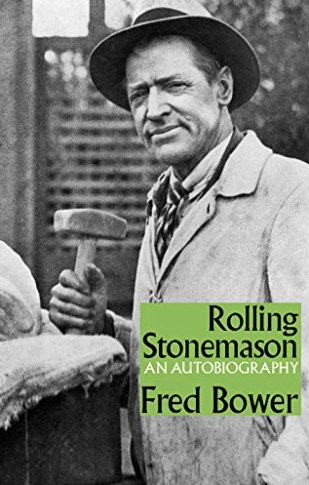 We have Blacklisted, by Dave Smith and Phil Chamberlain, a New Internationalist title, which is about the decades long blacklisting of union activist construction workers. Another favourite is Undercover: The True Story of Britain’s Secret Police, by Rob Evans and Paul Lewis, about the undercover cops who infiltrated campaign groups, and formed relationships with women, even fathering children with them. It reads like a thriller but unfortunately it’s real life.

These alternative worldview books are massive sellers for us. We have a whole shelf of books on capitalism, for example.  One of our staff wrote shelf labels that went – Anti-Capitalism, Fair Trade, Co-operatives, Economic Alternatives, and … Dirty Thieving Bastards.The displays we have in the shop give a good flavour of what makes us different. We have a “We Love Unions” window display, which is a big national week, along with cards people can fill in explaining why they love their union. 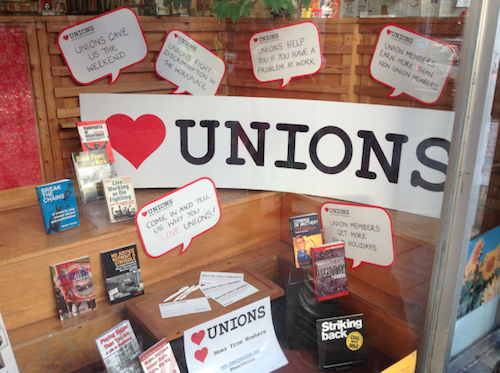 The “Getting Through February” display makes me laugh. It includes books organised into themes such as Getting Creative; Be Yourself, Everyone Else is Already Taken; Connect with your Wild Side; Kick Up a Fuss, and Hunker Down with a Good Book. 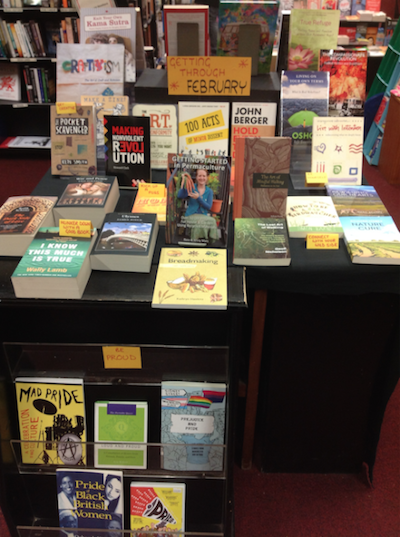 - “Getting Through February” display

We have a display about Syria, Turkey, the Kurds and refugee issues, and a children’s display about Chinese New Year.  There’s a Valentine’s Day display, too, which might seem quite mainstream, but the books there cover topics like zen sex, The Vagina Monologues, Billy Bragg’s A Lover Sings, Thich Nhat Hanh’s True Love. Whatever we do, we do it with a twist. 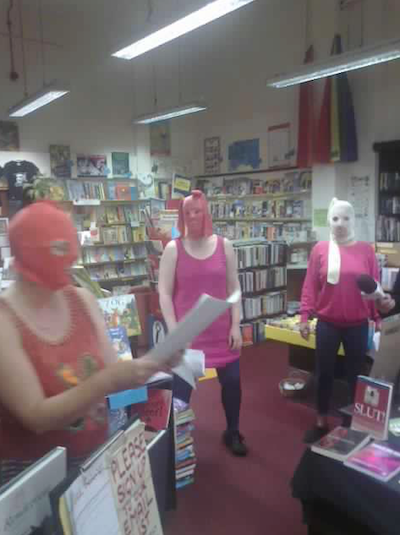 - Reading in support of Pussy Riot

We’ve organised the first Merseyside International Feminist Bookfair in 1984; performed a reading in support of Pussy Riot; held a Ranters Corner on the royal wedding day. We’ve hosted many authors over the years, from Jeanette Winterson to Alexei Sayle and Yasmin Alibhai-Brown to Bill Drummond. And we spend a lot of our time taking books in and out of the shop to poetry events, author signings, conferences and political meetings. The life of a radical bookseller is never dull! 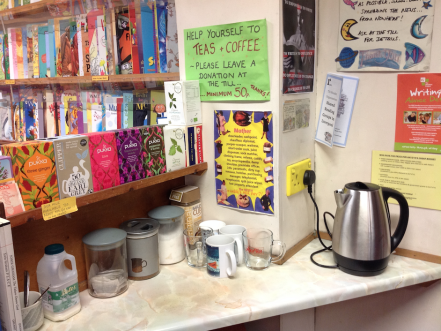 We do of course have our own ordering website and as a women’s cooperative, we say “Shop with the real Amazons”. We don’t have any plans to expand, open any new branches, or open a café. We do have a kettle in the corner and a comfy chair so people can make themselves a cup of tea while they’re browsing.

There’s a real compulsion in the world nowadays to grow, and if you’re not growing you’re failing.  The fact that we are still here, and that we’re sustainable, is really part of our ethos. We’re happy just doing what we do. People often tell us how glad they are that we’re here, and that we’re a haven from the world.  They’re hungry for an alternative view. They’re sick of being sold lies by the powers that be.  We’re proud to be part of the alternative. In terms of a job, the satisfaction we get is incredible.

Combined Academic spoke to Mandy, a member of the women’s co-operative that run News from Nowhere. 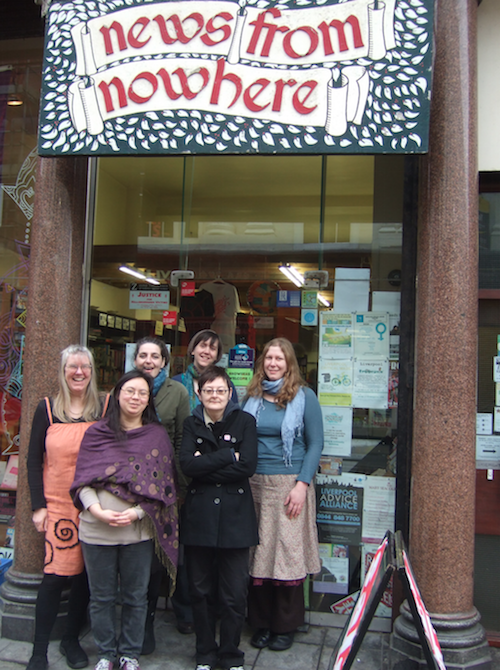 The team from left to right – Mandy, Maria, Sara, Cate, Julie and Sal