The End of the EU: France’s Contribution by Étienne Balibar

In an article that originally appeared in Libération the French Marxist philosopher Étienne Balibar details France's contribution to the decomposition of the European Union via its sabotage of efforts to settle refugees and its complicity in the destruction of the Greek economy. Translated by David Broder. 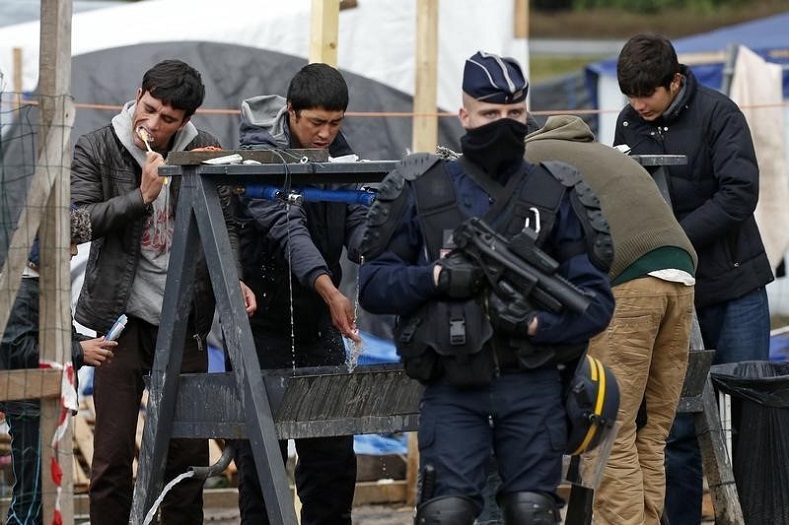 The refugee crisis represents not only the failure of the European project, but also the failure of a space of solidarity and democracy. And France has contributed to this failure, not least in its abandonment of its German partner

In a dramatic editorial, France’s leading daily reported ‘Europe’s clinical death, having been unable to address the refugee crisis in a collective manner. Historians will certainly date the beginning of Europe’s composition back to this episode’ [1]. Alas, there is no need to wait for the historians to pass judgment. This fact already stands before us. And its consequences will be disastrous - not only for the ‘European project’, or for the EU as an institution, but for the peoples who compose the Union, and each of us as indivdiuals and as citizens. That is not because this Union — which we are also told is only still operative on the terrain of ‘managing the single market’ — was some haven of solidarity and democracy. Far from it. But because in the short term, its disintegration will mean even less democracy, in the sense of peoples’ shared sovereignty; even less possibilities for confronting global economic and ecological challenges; and less hope of one day surmounting the murderous nationalism which, in theory at least, this Union was meant to protect us from.

However, while we might share this sinister outlook (and I do myself), I think that one element is terribly lacking, here, just as in other commentaries: namely, France’s specific contribution to this outcome. Without doubt, it can’t be held alone responsible. But we are kidding ourselves if we remain silent on its role; to do so would be to renege on our responsibilities. As a French and European citizen, I cannot and do not want to accept that.

At the end of last summer Chancellor Merkel took the unilateral decision to relax the Dublin Agreement rules [on asylum], so that Germany could take in the refugees fleeing the Syrian massacre — now in their hundreds of thousands, as many people begin to speak of a genocide perpetrated by several belligerents at once — as well as other theatres of war in the Middle East. There were two possible attitudes to take toward this. Either to come to the aid of the German initiative and support its population’s efforts, or to organise to sabotage it. After a little umming and aaahing, the French government pretended to take the first choice, while putting the second one into practice. Having finally accepted Juncker’s plan for sharing out the refugees across Europe — an evidently insufficient plan, but one which constituted a first step in getting to grips with the problem — France did everything it could to ensure that the agreement remained a dead letter. Still today, it has taken in just a few dozen of the 24,000 refugees it was meant to receive. We are told that the refugees ‘don’t want’ to come to France. Even supposing that that were true, no one however asks why the ‘land of asylum’ of yesteryear has become so offputting to people who have nothing. And if France’s abandonment of Europe’s other great nation is enough to persuade the Germans that they alone will have to bear this problem — well, that’s their business, isn’t it? They shouldn’t have thought themselves better than everyone else…

It’s their business, except that we are also still trying to get into the mix. And how! In January, using the pretext of the need to coordinate security measures after the terrorist attacks (and I am less inclined than anyone to underestimate the seriousness of the protective measures they demand) — prime minister Manuel Valls went to Munich to stigmatise the policy that Angela Merkel had undertaken. Following Viktor Orban, he was the second (chronologically, that is) of Europe’s heads of government to arrive on German soil coming to the aid of the country’s far Right, whose avowed objective is, indeed, to achieve the Chancellor’s submission or resignation. And on Thursday [25 February] [France’s interior] minister Bernard Cazeneuve was astonished to see Belgium hardening its border controls, having himself set in motion the process of dismantling the ‘Jungle’ in Calais, applying a plan concerted with his British counterpart which will throw hundreds of desperate people onto the roads.

Yes, every day Europe decomposes yet further — and we can take some of the credit for that. So we will suffer the consequences of this on all levels; it means losing honour, which plays a less negligible part than we might think in political constructions’ historical legitimacy, but also collective security and individual protection, which are the very conditions of civil life. Unless, that is, — on the brink of the point of no return — the conjunction of an enlightened movement in public opinion and a courage-reflex among those who govern us (or some of them, at least) sparks a change of course. Of course, I am not overly confident that this will happen, given what we have just seen. However, I will formulate what I think are two of the fundamental conditions for such a shift.

The first is finally to say loud and clear that Merkel was right, and that her initiative (which she has still not officially renounced, even though she has been placed on the defensive) must not be allowed to fail. This is not a question of her motivations — we will continue to detach the part concerning economic interest from the part concerning morality. Rather, it is a matter of recognising the political justice of a decision, the demarcation line that it has drawn between two conceptions of Europe, and the importance of the responsibilities — incumbent on all of us — that flow from it. Certainly, Merkel is paying for her isolation from European public opinion through the years of ‘power politics’ and the imposition of austerity on Europe; yet that is not the question — and in any case, we ourselves have nothing to boast about in this regard, because we followed her when it was instead necessary to resist. So the French President should go to Berlin, this time to promote the right cause: to speak to the historical moment we are in, and, together with Germany, to appeal for the other European nations to get to grips with this situation — in their interest, and for their future.

The second is immediately and actively to reject the isolation of Greece, into which the great mass of refugees are now being pushed. We must reject its exclusion from the system of European nations, which the Troika’s political-financial diktats did not manage to achieve, yet which the closing of the borders — proceeding from Hungary and Austria down to Macedonia and Albania — is now realising in practice, each day transforming the whole country into an open-air detention centre. Violence of all kinds is mounting in Greece, on our behalf and through our own responsibility; and once it has become uncontrollable, there will no longer be any time to ‘deplore’ such actions. It is not enough to preach hypocritical lessons to our Balkan neighbours and the Greeks themselves, to go begging to the Turks — involved ever-more actively in the war in the Middle East — promising them a little more money, or to charge NATO with a maritime guerrilla operation against the ‘traffickers’. As in other times of collective catastrophe, the situation demands large-scale emergency measures. The most obvious of these would consist of transferring the refugees who have already been registered, and those who are going to be, to the countries of the North by boat and helicopter. That is, transferring them to the countries — including our own — who have the means to receive the refugees, mobilising all the civilian and military means we have at hand.

I’m dreaming, aren’t I? No: I am opening up the discussion, for it is not yet certain that the worst will come to pass. The worst thing is resignation, blindness, historical Poujadism — even when it vests itself in a semblance of ‘realism’. So please, let’s discuss; but let’s not expect too much, for the countdown has begun.

- Read more about Immigration and Asylum on the Verso blog