The recent release of the Panama Papers, the largest cache of confidential documents ever released to the media, has given people an unprecedented look into the workings of the financial dealing rooms of the world. The release, from the world's fourth largest offshore law firm Mossac Fonseca, has already implicated many of the world's leaders and lead to the resignation of Icelandic Prime Minister Sigmundur Davíð Gunnlaugsson. But, what does this tell us about the involvement of the UK economy in tax havens. In this piece Tony Norfield, author of The City: London and The Global Power of Finance, analysis the connections between the UK and tax havens. 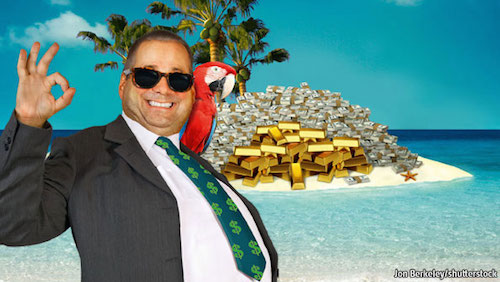 Files obtained from a Panamanian law firm have sparked a furore about tax dodging, but the ‘offshore centres’ like Panama are not just a bolthole for the rich. Big capitalist corporations also use them. In 2015, these centres accounted for a quarter of the foreign lending and borrowing of UK-based banks, in excess of a thousand billion dollars – much more than would be explained by the individuals named in the Panama files.

Panama is a relatively small-scale offshore centre. Much larger ones are UK-linked: the Cayman Islands, the Bahamas, Jersey, Guernsey and the Isle of Man. Not only do these sing ‘God Save the Queen’ as their national anthem, together they would rank as the sixth largest international banking centre, just behind Germany, despite their minuscule populations and the absence of any notable productive activity taking place in their varying climes. The UK has been heavily involved in this financial set up. While these islands are not technically part of UK territory – the Bahamas is a British Commonwealth member, while the others are either British Crown Dependencies or British Overseas Territories – the UK authorities give them a special status. British officials do not like to talk about them very much and, at most, only propose measures that would have little effect on the tax evasion taking place, such as calling for a ‘central register’ of who owns the more than two million companies and partnerships registered in these havens. The proposal is not expected to make much difference.

The UK offshore centres, Jersey, Guernsey and the Isle of Man, provide a large share of funds to the UK-based banking system. From 2011 to 2015, UK banks had lent roughly $100bn to them, but had borrowed some $200-300bn. In this way, UK offshore is an important source of funds helping to finance the huge deficit on the UK’s current account for goods and services on its balance of payments. This reached £96 billion in 2015, a historic high of just over 5% of GDP.

All offshore centres are closely linked to the interests of the major capitalist powers, and Britain has the closest links with the largest number. My experience of working for London-based banks included several business trips to Jersey, and some contact with other centres. They are seen as a valuable, although small, line of City business. This explains why many UK-based banks have operations in the UK offshore havens, despite their extremely provincial and unfashionably retro ambience. When it comes to hanging out as a member of the rich elite, Jersey has some way to go in competing with the offshore centres in the Caribbean and Central America. Nevertheless, the cost of obtaining funds from the tax havens is significantly less than from the ‘onshore’, more heavily taxed and regulated financial locations. This is a key factor in the role they play for the major financial hubs, especially London.

The Cayman Islands is an exception. There has been a position of steady net lending to the Caymans from UK-based banks: it amounted to $53bn by the end of 2015. The rationale for these particular flows is that the Caymans are a major centre for the legal home of international corporations, especially for fund managers and insurance companies, although their physical presence may amount to little more than a nameplate on a wall.

It might seem strange for the UK banking system to be funding operations in the Cayman Islands, but the mystery is solved when other links are taken into account. The funds the UK sends to the Caymans are, in turn, routed into the US equity and bond markets. Evidence for this is found in US statistics that show investors registered in the Caymans hold very large volumes of US securities. For example, at the end of 2011 these amounted to $128bn of US Treasury securities, $377bn of corporate and agency bonds and $381bn of equities. Did the fewer than 60,000 Cayman Island inhabitants, man, woman and child, manage to accumulate US financial securities worth some $15 million each? No, the securities do not belong to them.

These data illustrate the City’s major role in global finance and in funding the UK balance of payments deficit. The City is the key intermediary for international flows of money and securities and also takes a cut from all the deals passing through it.