Riot. Strike. Riot and Policing the Planet are 40% off! 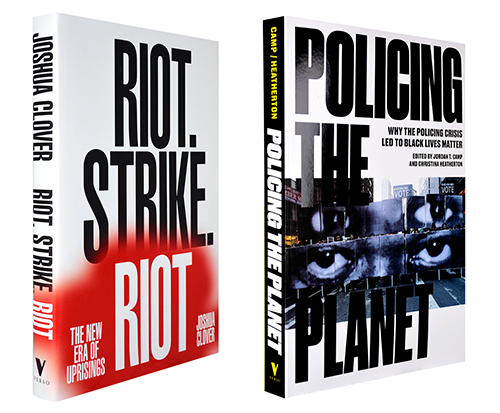 To celebrate the launch of Riot.Strike.Riot: The New Era of Uprisings
by Joshua Clover and Policing the Planet: Why the Policing Crisis Led to Black Lives Matter edited by Jordan T. Camp and Christina Heatherton, both books are 40% off until Wednesday, June 1. Includes a free bundled ebook and free shipping worldwide!

Joshua Clover’s Riot. Strike. Riot proclaims that ours has become an “age of riots” as the struggle of people versus state and capital has taken to the streets. Rioting was the central form of protest in the seventeenth and eighteenth centuries, and was supplanted by the strike in the early nineteenth century. It returned to prominence in the 1970s, profoundly changed along with the coordinates of race and class. As social unrest against an unsustainable order continues to grow, this valuable history will help guide future antagonists in their struggles toward a revolutionary horizon.

Why have the police been endowed with the arbitrary capacity to regulate the lives of the racialized poor in US cities? Can the problem of police violence actually be solved with the addition of more police (even better trained, more diverse, or better monitored) as many police departments and federal proposals suggest? How have these issues been addressed in other global contexts? And finally, what alternate definitions of security might we imagine? Policing the Planet, is a collaborative effort between social movement organizers, scholar-activists, journalists, and artists to address these questions. Following the lead of social movements, it reassesses the policing philosophy known as “broken windows theory.” In examining its spread throughout the US and around the world, it explores how broken windows policing has become the political expression of neoliberalism at the urban scale. Racism, it argues, has sustained and naturalized these processes as inexorable and inevitable. The book therefore considers the struggle against racism, militarism, and capital—the policing of the planet—as a central political challenge of our times.

Read an excerpt from Policing the Planet:
Fighting Broken Windows Policing in New York City in the '90s and '00s: A recent history with Joo-Hyun Kang

“We Are Those Lions”: 5 Strikes and Riots that Shook Modern Britain