For independent bookshop week we're profiling five radical bookshops AND we've asked them to give us their top 5 radical reads.

First up this week is... Bookmarks Bookshop! 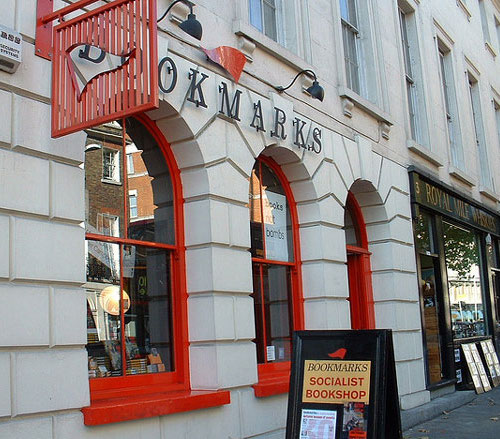 Bookmarks Bookshop have been selling radical books from their London-based shop for over forty years, as well providing bookstalls at events across the country. They maintain close ties with Ruskin College, which was originally established to provide university-standard education for the working classes. You won’t miss Bookmarks if you pass them during a demonstration based in London as staff will always deck the shop front with flags and banners, offering solidarity to local strikers and marchers.

You can visit them online here, and if you pop into Bookmarks on Saturday 25th and buy a book you can pick up your own TOTE BAG filled with ZED, PLUTO and VERSO GOODIES! (whilst stocks last. More info here)

The Truth About Our Schools by Melissa Benn and Janet Downs (Routledge, 2015)
A book that every parent will want to read, Benn and Downs challenge all the key myths about education. If you think that comprehensive education has failed, that local authorities control and hold back schools, or that academies raise standards or teachers don’t need qualifications, prepare to have those beliefs shaken by this brilliantly informative book. It’s time to take back our schools.

Detroit ‘67 by Stuart Cosgrove (Stuart Cosgrove, 2015)
Twelve chapters, arranged by month, take you on a turbulent, yearlong journey through the drama and chaos that ripped through Detroit in 1967. The Motor City was torn apart by personal, political and inter-racial disputes just as Motown, the most successful African-American music label ever, was facing its own internal struggles with the break up of the Supremes and personal tragedies. This is a wonderful read; keep your eyes peeled for Memphis ‘68 and Harlem ‘69, coming soon!

A Very Capitalist Condition by Roddy Slorach (Bookmarks, 2016)
Slorach, who is an active trade unionist and campaigner, writes about the history of disability and the ways in which people have fought and organised around this. Rather than viewing people as victims, this book examines the origins and development of disability, highlighting the hidden history of groups such as disabled war veterans, deaf people, and those in mental distress. It shows how capitalist society segregates and marginalises disability, turning our minds and bodies into commodities – and generating new impairment and disability as it does so.

1916: Ireland’s Revolutionary Tradition by Kieran Allen (Pluto, 2016)
AND
A Rebel’s Guide to James Connolly by Sean Mitchell (Bookmarks, 2016)
In this anniversary year, Allen’s book is one of our favourites on the events of the Easter Rising. He shows how the radical visions of Pearse and the socialist James Connolly are now an awkward encumbrance on an Irish state that has its roots in the counter-revolution of the civil war, and which has since emerged as a haven of economic neoliberalism. The slight but mighty Rebel’s Guide provides a fantastic introduction to the revolutionary politics of Connolly, so often brushed under the carpet.

Martha’s Story by Tony Barnsley, (Grosvenor House, 2015)
A fantastic book for younger readers which tells the story of the Chainmakers strike from the perspective of 11-year-old Martha Wood. Based on true events that took place in the Black Country during 1910, Martha's diary is an uplifting and inspirational story about the fight against inequality.