Wednesday is the day for Word Power Books’ top reads! 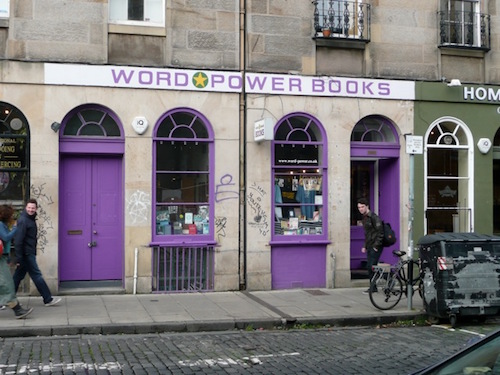 For over twenty years, Word Power Books has been serving its radical customers a diverse and non-mainstream range of books. Active supporters of small, independent, and Left publishers and writers, they will position titles of small presses and new writers, as well as obscure zines alongside more well-known titles on their shelves: giving an equal voice to all. They understand that the world of books is a precious resource – in their words, “books are not commodities to be marketed on the shelves alongside baked beans.” With a Banksy artwork on its door, even the façade of Word Power Books is worth a visit!

The Liberty Tree by Murray Armstrong (Word Power Books, 2014)
The Liberty Tree is a historical novel about the life and struggles of the Scottish Radical Thomas Muir (1765 – 1799). In the aftermath of the French Revolution, this Edinburgh lawyer was one of many who were viewed with deep suspicion by a corrupt and nepotistic state. In 1792, Muir demanded the vote for all Scottish men. For his impertinence, he was convicted of a trumped-up charge of seditious libel and transported to Australia from where he later escaped. Painstaking research and imaginative recreation combine in a biography that’s informative and highly absorbing. Thomas Muir of Huntershill is one of the Scottish Martyrs commemorated at the Obelisk by Calton Hill in Edinburgh but remains relatively unknown - this book aims to change that!

Red Rosa by Kate Evans (Verso, 2015)
In her graphic biography of Rosa Luxemburg, cartoonist and activist Kate Evans makes the stirring story of Rosa's life and legacy accessible to a new generation of readers. Red Rosa charts the dramatic life and death of the German revolutionary and the book should be read by anyone who wants to change the world. As Barbara Ehrenreich puts it, "This book is hard to put down and contains a challenge that is impossible to turn away from: We could create a better world—peaceful, egalitarian, even joyful—if we are willing to learn from Red Rosa."

Assata by Assata Shakur (Zed Books, 2014)
Assata Shakur's trial and conviction for the murder of a white state trooper in the spring of 1973 divided America and her case quickly became emblematic of race relations and police brutality in the USA. In 1979 she escaped from prison, was granted asylum in Cuba, and has been a fugitive ever since. She remains the FBI's most wanted woman. This intensely personal and political autobiography (with a Foreword by Angela Davis) reveals a sensitive and gifted woman, far from the fearsome image of her that is projected by the powers that be. While Assata's detractors continue to label her a ruthless killer, her defenders cite her as the victim of a systematic, racist campaign to criminalise and suppress black nationalist organisations.

The Lowland Clearances: Scotland's Silent Revolution 1760-1830 by Andrew Cassell and Peter Aitchison  (Birlinn, 2012)
The Highland Clearances are a well-documented episode in Scotland's past but they were not unique. The process began in the Scottish Lowlands nearly a century before, when tens of thousands of people - significantly more than were later exiled from the Highlands - were moved from the land by estate owners who replaced them with livestock or enclosed fields of crops. This book tells the story of the Lowland Clearances and how they undeniably shaped the appearance of the Scottish landscape as it is today as they swept aside a traditional way of life. A fascinating insight into a period of Scottish history often overlooked.

Feminist Theory by bell hooks (Pluto Press, 2000)
Feminist Theory established bell hooks as one of international feminism's most challenging and influential voices. In her sweeping examination of the core issues of sexual politics, she argues that contemporary feminists must acknowledge the full complexity and diversity of women's experience to create a mass movement to end women's oppression. We could have picked many other bell hooks' titles but this one - a classic yet still relevant today - is a good one to start with if you are new to her work.