The May/June issue of New Left Review is now available! 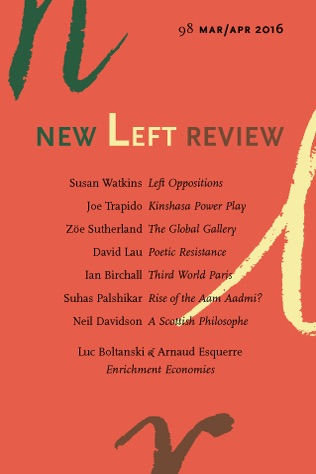 After years of economic crisis and social protest, the cartel parties of the extreme centre now face a challenge to their dominance from outside- left forces in a number of Western countries. Contours of the emergent left oppositions, their platforms and gureheads, from Tsipras to Corbyn, Sanders to Mélenchon, Grillo to Iglesias.

Collection and asset—two ideal-typical logics through which value and price are established and objects ‘enriched’. From luxury goods to heritage villages and the mimetic effects of speculation; as industrial production is transferred to East Asia, the emergence of a new kind of capitalist economy.

The drc’s capital is set to become Africa’s largest city, but struggles to assert its authority over a profoundly fractured state as it expands in chaotic fashion. Dilapidated infrastructure and a disintegrating formal economy have not extinguished Kinshasa’s extraordinary cultural vitality, or its role as a centre of political opposition.

First global art movement or mere identity of a New York set? Potpourri of avant-garde practices or formalist tautology? A survey of Conceptual Art’s crystallization, among international neo-avant-gardes and the artistic networks of global centres, between an abstract global imaginary and its concrete contestations.

The Aam Aadmi Party emerged from mass anti-corruption protests to sweep the board in regional elections for India’s capital city. Can its rule in Delhi open up space for popular mobilization on the national stage, challenging the rise of communalism, or will the party be sucked into humdrum parliamentary routines?

David Lau on Piotr Gwiazda, us Poetry in the Age of Empire, 1979–2012. American civic poetry from Vietnam to Occupy Wall Street.