The State of Bigoted Violence: Radical Perspectives on Orlando

In an appearance on KPFA’s Flashpoints, Yasmin Nair and Vijay Prashad, alongside other commentators, addressed the state’s role in the normalization of anti-LGBTQ violence, the co-optation of queer struggles, and contradictory media responses to the Orlando attack. 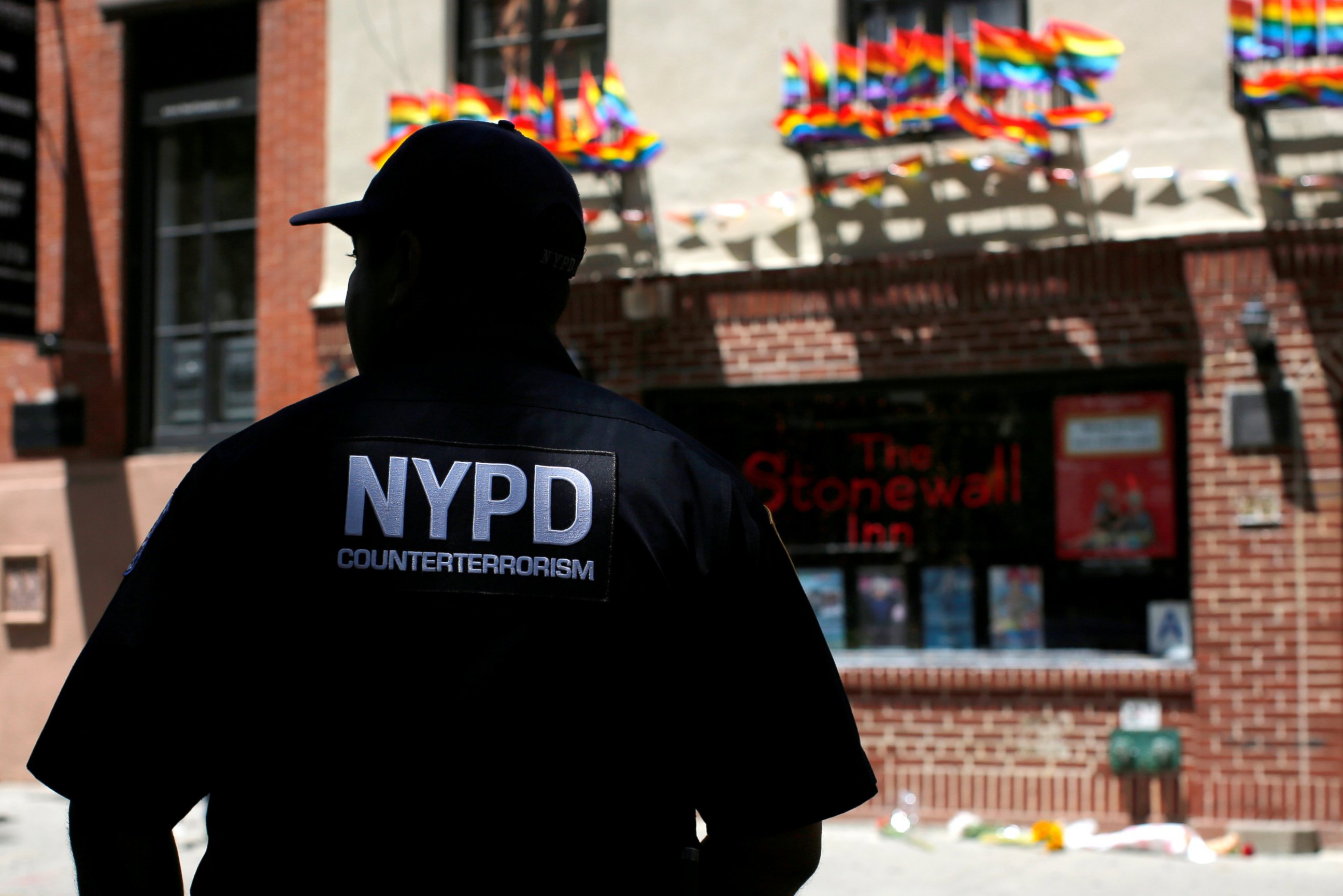 Immediately following the tragedy, “terrorism” became the state-sanctioned narrative of the events in Orlando, and with it, a prescription of aerial bombardment abroad and more policing at home. A string of recent revelations demonstrates that this narrative wasn’t just pursued by members of government in the wake of the shooting; it was a story actively shaped by the FBI before and after the the attacks. FBI agents not only told Mateen’s wife not to disclose that he was gay, but actively recruited him into terrorist activity unsuccessfully in 2013. To be sure, the instrumentalization of "terrorism" to justify state violence is hardly a new phenomenon stateside. As Vijay Prashad notes, such rhetoric is part of a dangerous and perennial trend that serves, in this instance, to distract from crucial layers of context that calibrated the conditions leading up to the attack.

It’s become a cliche to take up an issue where […] there’s somebody wielding a gun — particularly when a Muslim is [on] the other side of the gun — to bring up the question of terrorism. […] On the one side, the United States government says we’re going to crush terrorism, so it inflates the power of the government. Surveillance can increase. […] There will be more policing of certain areas. And on the other side it inflates the ambitions of, you know, groups like the Islamic State or Al Qaeda, who suddenly say, look, “We attacked in San Bernardino, we attacked in Orlando.” I mean, they did none of those things! ...This framing both inflates the United States government and groups like ISIS and Al Qaeda, but it misses the nuance of the event itself.

The conditions undergirding the Pulse shooting, Prashad argues, have less to do with global geopolitics than they do with anti-queer violence, transphobic bigotry, and ubiquitous access to guns, all of which are imminently homegrown.

The nuance here is the question of homophobia. And homophobia gets covered over by conversations of terrorism. It becomes much easier to talk about this as as an act, somehow, of global nature, rather than a much more parochial problem inside the United States, which is a lingering and persistent homophobic attitude coupled with too-easy access to guns. But it’s a conversation I don’t think we want to have. […]

Foregrounded in the aftermath of the shootings has been the recapitulation of another tired routine: the co-optation of queer and trans struggles by the very legislators who voted for bills that would aggravate the everyday violence faced by the LGBTQ community.

On the one side, this framework of terrorism allows the government to inflate its role, and on the other side, it has enabled a section of let’s say the homophobic political class, to hide behind terrorism and wrap themselves with the flag. And by the way, it’s definitely not the rainbow flag that they’re wrapping themselves with.

Social movements earnestly tried to pivot to an alternative narrative, from “terrorism" to “homophobia.” And certainly, latter’s role in the attacks is ineluctable. But queer activist and political commentator Yasmin Nair nevertheless suggests that placing too much emphasis on the individual assailant’s motives within the dichotomy of homophobia and terror can only obscure the role that the state plays in producing vulnerability to both kinds of violence.

The big concern for radical queers has been this distinction that’s made between the framework of terrorism and the framework of homophobia, as if positioning these two in different ways, or opposing each other, or thinking of them as distinct, helps reconcile anything. I think with we’re trying to walk away from the terrorist framework which has been disastrous for decades now, but also simply thinking of this as homophobia individualizes his action. The entire incident now has been wrapped up in the discourse of safety or lack thereof. […] we understand that queers everywhere are struggling right now, grappling with this sense of vulnerability. That’s understandable, especially during pride month. But to think about it only in terms of safety of queer people ignores the fact that people of color, queers of color, migrants, people like Sandra Bland […] a lot of us have always felt unsafe. So when we talk about homophobia making queers feel unsafe, we tend to forget that the state, constantly, makes everyone feel unsafe. That’s the problem with the positioning of those frameworks, homophobia and terrorism.

Nair suggests that the events were overdetermined by the complex and sometimes contradictory conditions relating to imperialism and Islamophobia, masculinity and assimilation.

Mateen’s life and action exemplify a particular nexus of circumstances, and honestly, a profound kind of psychosis that is a part of the world that the US has created.

His parents are from Afghanistan; He was born and raised in New York City; He had a very particular fetish for the NYPD; He was hired for a security firm that has been charged with abusing the juveniles they were supposed to be protecting […]; He committed domestic abuse; He wasn’t just homophobic but had issues with all sorts of minorities. It’s easy to say: 'well, this is a person and his individual problems.’ But when we think about Mateen’s actions, against the backdrop of the US wreaking havoc across the world, particularly in Afghanistan, you see someone whose consciousness is molded by these seemingly contradictory impulses. One is, of course, to become in a sense an "American man,” that socialization of the American mode of masculinity. This happens a the same time he grows up hearing his father talking about Afghanistan, what’s happened to Afghanistan, right? So you have this particular, strange kind of nexus of almost contradictory impulses [...]

Whether or not he is gay is besides the point […] We can be absolutely clear: this is a person who suffered from tremendous instability, which is putting it mildly. This kind a person who came about in a system which has drastically reduced mental health care systems […] In a state of surveillance and worse, where people can be  sent off to Guantanamo for the rest of their lives and literally disappeared, what incentive is there for close family members to talk to the state? And what resources are there? You turn him in and he disappears into a black hole. We have this tremendous withdrawal of resources, not only for immigrants, but everyone. We have a terrible healthcare system. The question of whether or not he was gay is immaterial to the fact that he was a person who did this horrible thing, and what kind of conditions brought this out.

The same backdrop that produced the Orlando shooter — the escalating war on terror and neoliberal immiseration — has for several decades oriented the program for gay rights. As liberal LGBTQ leadership developed a more amicable relationship to the Democratic Party establishment, the vision of queer liberation was dramatically circumscribed, sutured to a transforming architecture of the state. For Nair, this strategy of inclusion authorized the expansion of military adventurism, while hate crime protections legitimated the most repressive elements of the judiciary. And yet both are continue to be unyieldingly turned on queer people themselves.

I would especially want the LGBTQ community to really start thinking about how the desires and systems that we have been demanding over the last 30-40 years, have not directly caused what happened — absolutely not — but have curtailed our sense of what is really at stake, not just for queers but for everyone. For the last 20-odd years, the LGBTQ community, or rather i should say the LGBT community, or really the LG community has been fighting for gay marriage, for the ability to fight in wars abroad, and the right to enact hate crime legislation. You know, hate crime legislation does nothing but increase the scope of the prison industrial complex by asking for extensions of sentences, for instance. […] We have to start thinking of the consequences of what we put forth in the world and what we think we want. The expansion of the military, the expansion of hate crime legislation only expands the scope of military violence, the scope of prisons. […] What else can we achieve beyond these normative goals?

Yasmin Nair is a political commentator and writer based in Chicago, and co-founder of Against Equality. Her writing appears along with other critical feminist voices in False Choices: The Faux Feminism of Hillary Rodham Clinton.

Vijay Prashad is the George and Martha Kellner Professor of South Asian History at Trinity College, where he studies the dynamic interplay between capitalism, imperialism, and proletarian opposition. He’s the author of The Poorer Nations and the editor of Letters to Palestine.

To listen to the full audio of this episode of Flashpoints, click here.
Tagged
police