The Whorled Circle Of A Political Cosmology

Sam Kriss responds to the post-Brexit Labour leadership coup against Jeremy Corbyn: "This is why they’re trying to depose Jeremy Corbyn – he refused to be racist enough." 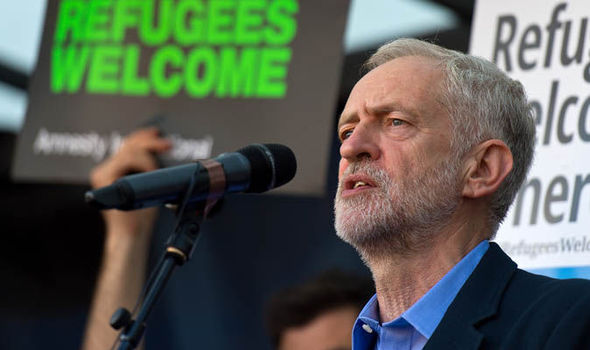 What the parliamentary Labour party is doing right now is very stupid, and we shouldn’t shy away from saying that they’re doing it because they are very stupid people. In one day, eleven members of Jeremy Corbyn’s shadow cabinet resigned, their announcements spaced out for total media saturation, little grins of transgressive glee breaking through their sham TV-ready seriousness. With the British public, that vast and wandering abstraction, having very possibly voted itself out of existence, and the government in a state of permanent turmoil, only an opposition party that is deeply stupid would think that this is the best moment to attempt to remove its own leadership. Only the deeply stupid (or the outrightly fascist) would see a country collapsing into fascism as a great opportunity to start attacking the left. But the Labour right are a deeply unimpressive lot: blinkered, vicious, grasping, narcissistic, petulant, and desperate, these people operate primarily through the medium of the hapless plot, and want very keenly to be loved, to which end they will do almost anything except trying to be less loathsome. It doesn’t really make much sense to call them Blairites any more – Blair’s original pact was directed at a universal and post-ideological petit bourgeoisie, offering them bright colours and melodic sounds in a sunlit neoliberal utopia. As we discovered, that deal was hollow; what we got was war and collapse. Labour’s new right, by contrast, is neurotically fixated on a half-remembered image of the working class, and its only promise to them is to be more racist.

There was something very strange, and mostly unremarked-upon, in the short period of stage-setting that preceded yesterday’s mass resignations. In a series of documents leaked to the media, shadowy and nameless disgruntled MPs complained that Corbyn had failed to effectively press for Britain to stay in the EU, ‘sabotaged’ the LabourIN campaign, and spent much of his time criticising Brussels while ostensibly defending it. But then there was this: an allegation that Corbyn would not allow the Labour party to ‘discuss or address concerns around immigration, writing them off as ‘xenophobia’, ‘prejudice’ or ‘racism’ at every turn.’ On the face of it, this doesn’t make much sense: these much-vaunted and (as we’re constantly assured) deeply reasonable concerns around immigration tend to correlate strongly with an antipathy to the EU; indulging them would have only further doomed the Remain campaign’s efforts. Corbyn seems to be in an impossible position, not allowed to defend or critique the European project. But this shouldn’t be read on its face. It isn’t a complaint; it’s a symptom. If you want to know what’s going on in the Labour party, this is a good place to start: the little psychic knot at the heart of the right wing’s determination to get rid of the man.

This is why they’re trying to depose Jeremy Corbyn – he refused to be racist enough. The real nature of the complaint is of course buried in metaphor; the preferred euphemism is electability. For years, Labour has attempted to endear itself to the populace by adopting the language of the far right – Gordon Brown’s ‘British jobs for British workers’; Ed Miliband putting the words ‘controls on immigration’ on an official mug and the rock that would become his tombstone. It’s a curious form of self-abasement: a metropolitan elite, terrified of what it is and desperate to be seen as something else, takes its worst prejudices about the working classes and upholds them as a positive. Unsurprisingly, it hasn’t worked – people who do subscribe to racist ideologies will tend to vote for parties that espouse them out of the genuine conviction of evil, rather than those who openly announce that their evil is only a cynical ploy. But it has had the effect of entrenching the language of the far right across the political spectrum, and thereby reinforcing the idiot axiom that you have to speak it to win popular support.

In this whorled circle of a political cosmology, Corbyn is an utterly abject thing: he represents an electorate that does not want to elect the designatedly electable, a structural impossibility, and like all structural impossibilities he becomes the object of a visceral, somatic horror. Labour has given up pretending that its anti-socialism is a matter of political expediency. This is a war of extermination, and it’s being fought for reasons that are simply not rational. Each resigning shadow cabinet member gave the same ramblingly tautological explanation: it’s not ideological, and Jeremy is (in a nauseatingly reiterated phrase) a ‘great human being’, but he’s been unable to lead effectively, unable to secure the support of the parliamentary party, and therefore they can no longer pretend to support his leadership. In other words, they’re forced to hate him because they already hate him; they want him to go because that’s what they want.

Still, there’s no point pretending. The Labour party has not done well under Corbyn, it has not been united, and it has little hope of winning a general election. The fact that this is mostly down to the recalcitrance of its right-wing MPs doesn’t change this fact, and can’t be subtracted from its effects. But if his leadership has been turbulent, his ouster would be fully disastrous. The party might be unified, but with the unity of the inept. Yes, Corbyn has failed to keep his party together, but his enemies – who are, remember, supposed to be the politically savvy ones here – have been even more cackhanded in their attempts to remove him. The current shambles of a coup is no exception. From a purely strategic perspective, it was a terrible idea: the plotters had no real leverage, and no real plan beyond the expectation that Corbyn would obediently resign. So far, he has not resigned, and he’s almost certain to win any new leadership election. All these people have succeeded in doing is exhausting and exposing themselves. They think they can take Labour to victory, but they can’t even carry out a half-decent conspiracy; far from saving the party, any successful intervention would probably end up destroying it forever. Which is for the best. After all, imagine the peril we’d be in if these slapstick mediocrities managed to get their hands on nuclear weapons.