"From One Wall to Another" an extract from The Last Communard 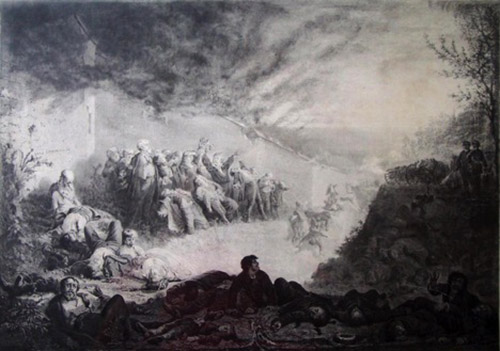 On 10 November 1989, the day after the fall of the Berlin Wall, I discovered the last Communard. Having been a young communist for a decade, I tried to clear my head of the cataclysmic news of the previous day and repaired to one of my favourite places for solitary contemplation in Paris, the cemetery of P.re-Lachaise. Here I wandered among dead leaves and neglected tombs, until I arrived at the corner in the south-east of the cemetery called Le Mur des Fédérés.

Here the very atmosphere of the place distinguishes it from the rest of the necropolis. It is a realm of memory, layered with several periods of history. It was in front of this wall, legend has it, that the Paris Commune ended, when on 28 May 1871, 147 of its citizen’s militia, known as Fédérés (after the Federation of the National Guard), were shot before being hastily buried in a shallow grave. This massacre was represented soon after in Ernest Pichio’s apocalyptic painting Le triomphe de l’ordre, which depicts young and old, women and children, being mown down and tumbling into an abyss. Indeed, the place became a shrine to what was seen as a tragic experiment in people’s democracy. Facing the wall, which now boasts a commemorative plaque, are several relatively discreet monuments to the survivors of that bloody episode: the tombs of Jean-Baptiste Clément, author of the song ‘Le Temps des cerises’ in which cherries are compared to drops of blood lies here, as well as Paul Lafargue, husband of Laura Marx, with whom he committed suicide in 1911 to escape the impairment of old age.

In this section of the cemetery, I wandered along the great circular avenue that held many Communist graves, where, until very recently, the French Communist Party (PCF), buried almost all its dignitaries: the ‘Son of the People’ Maurice Thorez; the clandestine party leader of the Second World War, Jacques Duclos; the founding leader Marcel Cachin; the L’Humanité editor Paul Vaillant-Couturier; and the writers Henri Barbusse and Paul Eluard. Beside the grave of Duclos, I noticed for the first time a small black tombstone. It bore a simple epitaph:

I stood for a few minutes in front of this modest grave and wondered about the things he might have seen in such a long life. What was he doing in the USSR in the darkest days of the Second World War? How did he find his way back to this corner of Paris, to rest in front of the wall where the last Communards fell?

In the weeks and months afterwards these questions continued to nag at me, and, despite the historic upheavals that were occurring around the world, curiosity kept bringing me back to the name engraved on that little black stone. And I started to see what I could find out about this enigma.

L’Humanité, the official paper of the PCF, was my first port of call. On 22 May 1971 – the centenary year of the Paris Commune – the front page of the broadsheet had displayed a photograph of Lejeune over an article entitled ‘One hundred years on. The Communard Lejeune will rest near his last barricade’:

Yesterday at Le Bourget, the regular Aeroflot Moscow–Paris flight brought back the ashes of Alfred [sic] Lejeune, the ast of the Communards, who died aged ninety-five in 1942 in Novosibirsk (Soviet Union). The urn was carried by the president of the Party Committee of Novosibirsk, Filatov, accompanied by the academician Inozentsev of the Central Committee of the Communist Party of the Soviet Union and by comrade Pankov, collaborator at the Central Committee. They were greeted by Gaston Plissonnier and Paul Laurent of the Political Bureau of the French Communist Party, Lucien Mathey of the Central Committee, secretary of the Federation of Seine-Saint-Denis, Jean Braire, general secretary of the ‘Friends of the Commune’, Maurice Niles, deputy-mayor of Drancy, the secretary of the communist cell of the Airport of Le Bourget, etc. Accompanying the representatives of the embassy of the USSR was a delegation from Bagnolet, led by our comrade Joineau, deputy-mayor. It is in the mairie of Bagnolet, his home town, that the ashes of Alfred Lejeune have been displayed. A ceremony will take place there tomorrow morning at ten with the participation of the Soviet delegation and Jacques Duclos. Already yesterday afternoon the local population began to pay their respects to the urn. The urn  will be transported on Sunday to the Mur des Fédérés where a last homage will be paid to Alfred Lejeune by all the participants in the Centenary Demonstration.

On page five, Fernand Chatel recounted the story of this great survivor, this time managing to spell his name correctly. Adrien Lejeune, we learn, was born on 3 June 1847, in Bagnolet. His father was a barrel-maker, his mother a seamstress. He was forced to earn his living from a young age at a variety of jobs. After many nights and Sundays spent studying, he became a herbalist in a pharmacy. Two years later, aged twenty-two, Adrien Lejeune joined the Republican Association of Freethinkers that brought together socialists and progressives in opposition to the imperial regime and its staunch ally, the Catholic Church. Though protest marches were forbidden, the funeral of each freethinker turned into a popular demonstration against the Empire and oppression. In February 1870, at the close of one such funeral procession in Bagnolet, Adrien Lejeune addressed the crowd. On 4 September 1870, after Emperor Napoleon III’s declaration of war against Prussia had led to disaster at Sedan and his own capture, an uprising in Paris culminated in the proclamation of the Third Republic.

Although, for health reasons, Lejeune was unfit to serve in the army, he joined the National Guard to fight against the siege of Paris by Otto von Bismarck’s troops. He was a sergeant in the 2nd Company of the 28th Battalion. On 18 March 1871, Lejeune ‘did not hesitate for an instant’ and went up the Butte de Montmartre, the hill dominating northern Paris, to defend the cannon of the National Guard. He was therefore among those who proclaimed the Commune that same day. During those feverish weeks, Adrien Lejeune divided his time between Bagnolet and the mairie of the 20th arrondissement, a Communard hotbed. When the troops of the government based in Versailles invaded the capital, he fought bravely. ‘We defended one barricade after another’, Lejeune would later write. ‘Thus I reached the barricade in the rue des Pyrénées in the district of Belleville. It was the night of 27 to 28 May. And in the morning they caught me’. He was recognised and arrested while trying to reach the mairie of the 20th arrondissement. On 12 February 1872 he was sentenced to five years’ detention in a floating prison. He helped his comrades to escape. He was later sent to the labour camp at Nouméa (New Caledonia, in the south Pacific), until in 1880, with the general amnesty, he returned to Bagnolet.

In 1905, after following the movement of Communard leader Edouard Vaillant, he joined Jean Jaurès and Jules Guesde in the Unified Socialist Party. In 1917 he ‘greeted with enthusiasm the socialist October Revolution which meant the triumph of the Commune’s ideas in one sixth of the globe’. In 1922, now aged seventy-five, the old Communard joined the young French Communist Party. Despite age and illness, his mind was ‘still combative’, which meant more run-ins with the police of the reactionary government. An international committee, specifically created to help the survivors of the Commune, arranged for him to take refuge in the Soviet Union. In 1926, Adrien Lejeune left France for what he would describe as his ‘second country’. On the eve of his departure, he gave Marcel Cachin, director of L’Humanité, all his savings and his shares in the newspaper. In Moscow, Lejeune lived in the House of the Veterans of the Revolution. In 1936, he donated his meagre savings to the children of Spanish Republicans killed in the struggle against Franco. In October 1941, as Hitler’s troops approached Moscow, Adrien Lejeune, with the schoolchildren and old people of his district, was evacuated to Novosibirsk, in Siberia. Fernand Chatel concluded:

There was a ration card for everyone except for the last living Communard, whose rallying cries were read out in the units of the Red Army. His last letter, on 31 December 1941, wished a Happy New Year to the Red Army wounded being treated at the hospital of Novosibirsk. He died on 9 January 1942, at the age of ninety-five, in that Siberian city which still has a street named after him and where not a day goes by without some flowers being laid upon his grave.

L’Humanité’s account presented Lejeune as the embodiment of the perfect Communard: of modest origins but with a ferocious appetite for self-education, a freethinker, active in all the uprisings and on all the barricades, present to the bitter end. Afterwards he paid the price for his beliefs – labour camp and deportation – alongside his fellow Communards. However, his commitment never wavered and he became an early adherent to French Marxism, rallying to the Third International before finding a second homeland, the USSR. It was only fitting that such a hero should be given a garlanded return to this historic burial ground on such an anniversary. His reinterment symbolised the very act of memorialisation, while his life and death epitomised the hopes and brutal realities of the revolutionary movement itself.

The newspaper report increased my interest in Lejeune, yet I was aware that this could hardly be the complete story. Where did the truth lie within the mythologising pages of L’Humanité? I soon discovered that the facts were elusive and impossible to reconstruct in their entirety. My research in the archives of the Comintern in Moscow, and the French Communist Party in Bobigny, as well as in those of the Historical Service of the Ministry of Defence, at the Château de Vincennes, revealed a considerable gap between the last Communard’s life and his legend – a legend in which Adrien Lejeune himself was complicit.

By excavating the records and getting as close as possible to the real man, I realised how history can be made from the least likely participants. The story of Lejeune is not just the history of the last Communard, but a model of how history itself is made. This humble man became a measure of the fall and rise and fall of communism in Europe in the century since he first stood on the barricades. The way his life and story have been appropriated, sold and retold is as important as the action he took on the streets in 1871.