Some of the most important works of post-war French Marxism were published in 1965. Louis Althusser’s For Marx was accompanied by his seminar group’s collaborative volume Reading Capital, and Henri Lefebvre’s Metaphilosophy appeared the same year. Both Reading Capital  and Metaphilosophy now appear, in complete translations, from Verso. 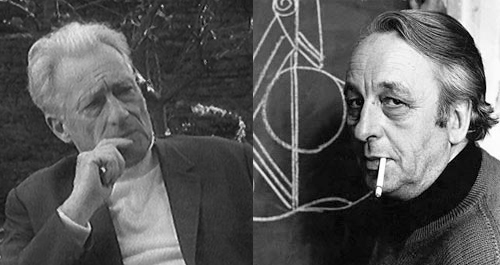 Metaphilosophy was written between 1963 and 1964, before Althusser’s double-barrelled assault on the contemporary scene, and makes no mention of him. Structuralism is criticised, certainly, but not Althusser’s reading of Marx. But this was quickly remedied: Lefebvre would devote several essays to analysing and disputing Althusser’s claims, collected with earlier pieces in his later book Au-dèla du structuralisme. Lefebvre saw structuralism as the ‘French ideology’, in service to a particular model of state socialism. It took a single concept, ‘structure’, and privileged that, rather than looking at the relation of form, function and structure in Marx’s work. Althusser’s neglect of Lefebvre in 1965 was less forgivable – Lefebvre was a generation older than Althusser, and had written extensively on the very issues Althusser would claim French Marxism had neglected. Althusser never devoted himself to analysis or critique of Lefebvre, though he did praise his book on Lenin.

Both Reading Capital and Metaphilosophy are poorly understood in English debates. Reading Capital, in its original French edition, included essays by Étienne Balibar, Jacques Rancière, Roger Establet and Pierre Macherey, alongside Althusser’s contributions. The original English translation only included Althusser and Balibar’s pieces. The publication of the full text, building on Ben Brewster’s original translation and with amendments and new translations by David Fernbach, is therefore extremely welcome. Althusser’s students went on to illustrious careers, and while Establet is much less known in English debates, many of the major works of Rancière, Macherey and Balibar are translated and widely discussed. While none continued Althusser’s work uncritically, these essays help orientate their future careers, and this edition also includes a short ‘presentation’ by Balibar.

Metaphilosophy was not translated at all, save for its opening pages in Key Writings,and along with the bulk of Lefebvre’s work remained largely unknown in English. It is worth stressing that only a handful of Lefebvre’s writings were translated into English in his lifetime. The situation was rather different in other European languages. Lefebvre died in 1991, the year that The Production of Space and the first volume of the Critique of Everyday Life were translated, and several other volumes have appeared since – the other parts of the Critique, Rhythmanalysis, many of his major works on cities and the urban, and parts of his four-volume study De l’État. These works are significant, certainly, and have been taken up and used in a range of fields, from geography and architecture to cultural studies and sociology. But while a few of Lefebvre’s more Marxist works had appeared a generation or more before – Dialectical Materialism and The Sociology of Marx – little of his more explicitly philosophical writings were available. This was unfortunate, and has led to a skewed reading of his work. The translation of Metaphilosophy, as perhaps the most significant of his more theoretical writings, and a foundation for his other work, helps to redress the balance. Translated, again, by David Fernbach, and edited by me, we hope this this is the first of a sequence of translations of Lefebvre’s philosophical work.

There are many points of connection and dispute between Althusser and Lefebvre, and Anglophone readers are now able to begin evaluating both positions. One of the most striking differences is in the attitude to Hegel. Althusser’s work, especially clearly in For Marx but running as a thread through his contributions to Reading Capital, is to demonstrate that only when Marx moved beyond Hegel did his work become truly scientific. Althusser wanted to establish a clear break between idealism and materialism, to rid Marxism of its vestigial humanism, to denigrate Marx’s early writings and the influence of Hegel. Lefebvre, in contrast, reads Marx’s work from early to late as a whole, does not just recognise the importance of Hegel to Marx but suggests Marx needs to be further supplemented with Hegelian ideas, and emphasises the humanism to be found throughout Marx’s writings. Lefebvre would not just provide a reading of a Hegelian Marx, and a Marxist interpretation and adoption of Hegel, but bring in other writers, notably Nietzsche. Lefebvre’s 1975 book Hegel, Marx, Nietzsche is another major text which is long overdue an English translation. In Metaphilosophy, all three play a crucial role, but there is also detailed engagement with Martin Heidegger, Jean-Paul Sartre and Kostas Axelos.

In a sideshow to the main event, on the same day these two works appear from Verso, so too does a reedition of Lucien Goldmann’s The Hidden God. A study of Pascal and Racine, this might appear unrelated to the work of Althusser and Lefebvre. But Goldmann was another major participant in French Marxist debates. Born in Romania, and educated in Switzerland, he was influenced by György Lukács. As Michael Löwy – his former student, and a critic of Althusser – notes in his introduction, there are parallels to be drawn between Goldmann’s work and Lefebvre’s own treatment of Pascal in two volumes, in 1949 and 1954. Lefebvre’s books on Pascal are part of a decade-long engagement with a number of the great men of French letters – Descartes, Diderot, Rabelais, Musset. One of the main reasons Lefebvre wrote these books – none of which have been translated into English – was that he was restricted from writing on more obviously political questions by the French communist party. When he left in 1958, after a period of suspension, there was an outpouring of more political and theoretical works, including his 1959 masterpiece, the sprawling, auto-biographical La somme et le reste. Metaphilosophy is in a direct lineage from that work.

Althusser’s position as one of the key French writers on Marx is well-established: the complete translation of Reading Capital rightly restores the important role his excellent students played in this significant interpretation. Lefebvre is much less known within Marxist debates. Metaphilosophy, as David Cunningham suggests in his generous endorsement of the book, “establishes Lefebvre’s place among the twentieth century’s very greatest Marxist thinkers”. It has taken fifty years for the complete translation of Reading Capital and the first translation of Metaphilosophy to appear, but now English-language readers can assess both these fundamental works together.

Louis Althusser’s Reading Capital, and Henri Lefebvre’s Metaphilosophy are available to purchase from the Verso website now. Both books are included in our Theory 50% off sale! 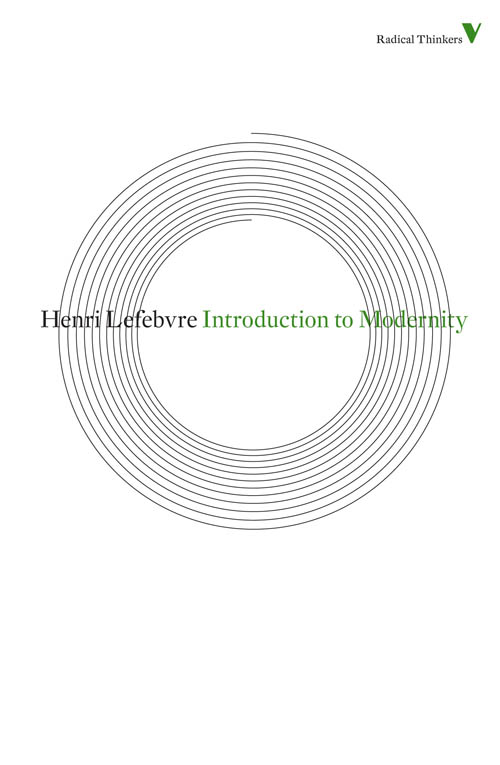 Introduction to Modernity
by Henri Lefebvre 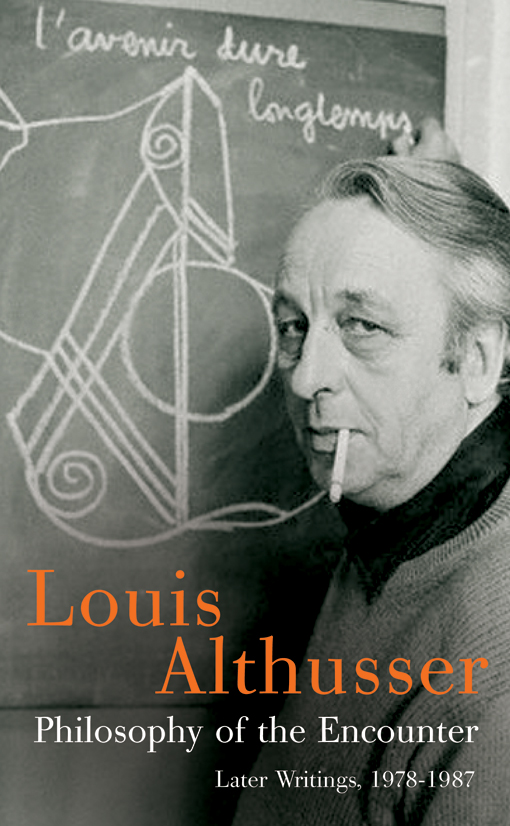 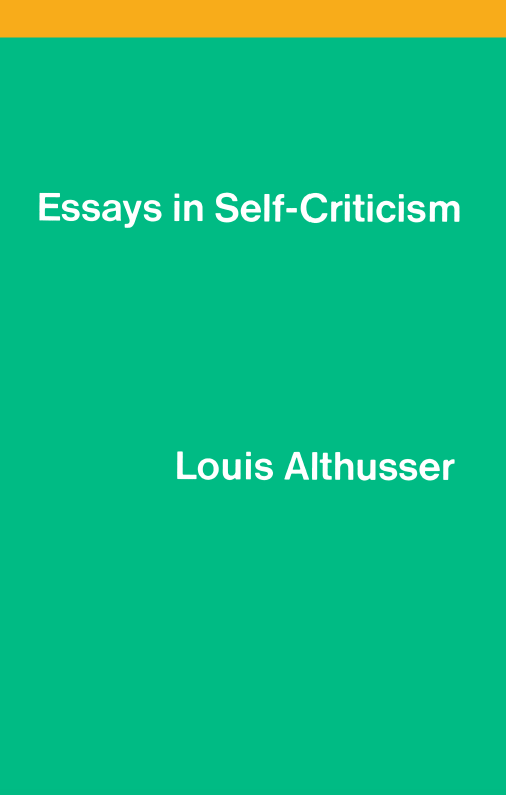 Essays in Self-Criticism
by Louis Althusser