On the eve of the Rio Olympics Philosophy Football have produced a T-shirt design based on the original poster of the 1936 Barcelona People's Olympics. In 1936 the Spanish Republican government refused to send a team to the Berlin Olympics which they correctly feared would be used to sanitise and propagandise the Nazi regime. Instead they organised a 'People's Olympics' in Barcelona which 6,000 athletes joined from across the world. The day before the opening ceremony Franco launched his murderous attack on the Republic to start the Spanish Civil War. The Barcelona Games were cancelled,  the athletes were forced to leave though some chose not to return home but to join the International Brigades in their battle for Spain's land and freedom. 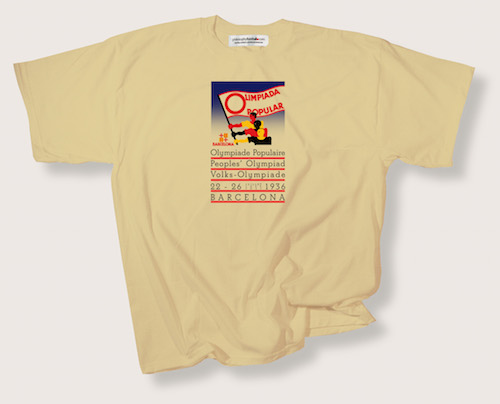 Philosophy Football's 80th anniversary shirt for the 'Barcelona Games' celebrate sport, then and now, as resistance.

HALF-PRICE BOOK OFFER! With your T-shirt you can also purchase at half-price Power Games a magnificent new political history of the Olympics by Jules Boykoff . From their nineteenth century origins in the age of Empire, via the alternative Workers' and Women's Games of the 1920s and 1930s, the 1960s and after rise of athlete-activism, to the corporate takeover of Olympic Sport, this is a sporting history like none other. Half-price just £5.99 when bought with your shirt, from www.philosophyfootball.com