Reece Jones is the author of  Violent Borders: Refugees and the Right to Move — a major new exploration of the refugee crisis, focusing on how borders are formed and policed. This book is 40% off until Sunday, 30th of October at midnight (UTC).

Here he argues that "what both sides of the debate miss is that it is not simply a migration crisis in Europe, but also a crisis created by Europe". 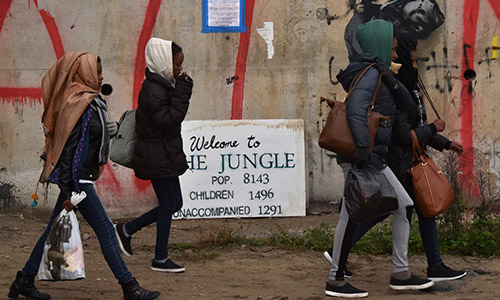 — people walk towards an official meeting point as part of the evacuation of the Calais refugee camp. Photograph: AFP/Getty

In Europe, observers from the right and the left of the political spectrum see the events at the edges of the European Union as a crisis, but so far neither has grasped how completely it is Europe’s crisis.

The right sees a crisis that threatens the existence of the identity of Europe as migrants bring different values, beliefs, and religions into the cultural space of Europe. The right also sees open borders as a crisis because they allow terrorists to take advantage of the freedom to move as the attacks in Brussels and Paris demonstrated. Consequently, in their view, the only way to protect the idea of Europe is to close borders, prevent unauthorized movements, and preserve the cultural and political space. This position is demonstrated by the growing popularity of anti-migrant political parties, the resistance to even meager refugee resettlement quotas, and the construction of new border walls in Austria, Bulgaria, Hungary, Norway, and Calais. British Prime Minister Theresa May recently emphasized that migration restrictions were a key part of Brexit saying "We did not leave the European Union only to give up control of immigration again" and some commentators were up in arms when even a few children from the Calais camp were admitted into the UK.

For the left, the crisis is the possibility that the fear of migrants will result in the rolling back of the freedoms that define what they see as the essence of Europe. The reinstatement of internal border controls, the failure to prevent thousands of migrant deaths in the Mediterranean, and the Brexit vote demonstrate a crisis in the moral fabric that defined Europe’s role as a place for humanitarianism and freedom. If these core values are lost in a fit of militarized securitization, the ideal of Europe will be lost as well.

What both sides of the debate miss is that it is not simply a migration crisis in Europe, but also a crisis created by Europe.

It is Europe’s migration crisis because of the history of European colonialism in Africa, Asia, and the Middle East. From the brutal extraction regimes of Africa to the two hundred years of British colonialism in India, European states destroyed the previous political systems that existed throughout the world, took resources and labor from their colonies, then left behind weakened, dependent states.

The roots of the crisis are in the arbitrary borders European states created at the end of the colonial era. These imposed lines run throughout the former colonial world: the legacies of Sykes-Picot in the Middle East, the Partition of India, the Durant line in Central Asia, and the Conference of Berlin borders that divide Africa. Arbitrary borders left behind by Europe perpetuate conflict throughout the formerly colonized world.

Moreover, global inequality is exacerbated through uneven trade agreements and through international organizations like the World Bank and International Monetary Fund, which are controlled by Europe and the US. Even a 2016 internal IMF report concluded that the benefits of the neoliberal trade agenda for poor countries were “difficult to establish” and the costs were “increased inequality.” The Washington Consensus policies of trade liberalization displace rural workers who move to slums in cities and then board crowded ships with the dream of a better life in Europe.

The only way that it is not Europe’s migration crisis is that Europe is not where the majority of refugees are actually located. In 2015, according to the UNHCR, there were 65 million people displaced by conflict globally, and only 14% were in Europe. Although it is a crisis created by Europe, countries in Asia, Africa, and the Middle East are dealing with the consequences. Lebanon, with a population of 4.47 million people, hosts almost 1.5 million Syrian refugees and 450,000 Palestinian refugees. To have a similar ratio of refugees to total population, the European Union would have to host almost 220 million refugees, or 200 times as many refugees as arrived in 2015.

Rather than building walls and fences that force migrants to take ever more dangerous routes and result in thousands of deaths every year, the European Union must open borders and allow the free movement of human beings who are displaced by the history of European colonialism, arbitrary borders, and economic policies. The only just solution to a migration crisis of Europe’s making is for Europe to take responsibility for the results. It is time for Europe to open its borders as a form of reparations for the past injustices that led to the crisis in the first place.

— Reece Jones is the author of Violent Borders: Refugees and the Right to Move — a major new exploration of the refugee crisis, focusing on how borders are formed and policed. This book is 40% off until Sunday, 30th of October at midnight (UTC). Includes free shipping (worldwide) and bundled ebook.