40% off EVERYTHING!
about 1 month left
Alexandra Tempus
comments

Independent journalist and researcher Alexandra Tempus proposes that reevaluating the global border regime is key to addressing the disproportionate effects of climate change on the world’s most vulnerable people. Tempus has covered climate justice and politics for Al Jazeera America, Vice News, the Associated Press and more. She was a lead researcher on Naomi Klein’s This Changes Everything: Capitalism vs. The Climate. 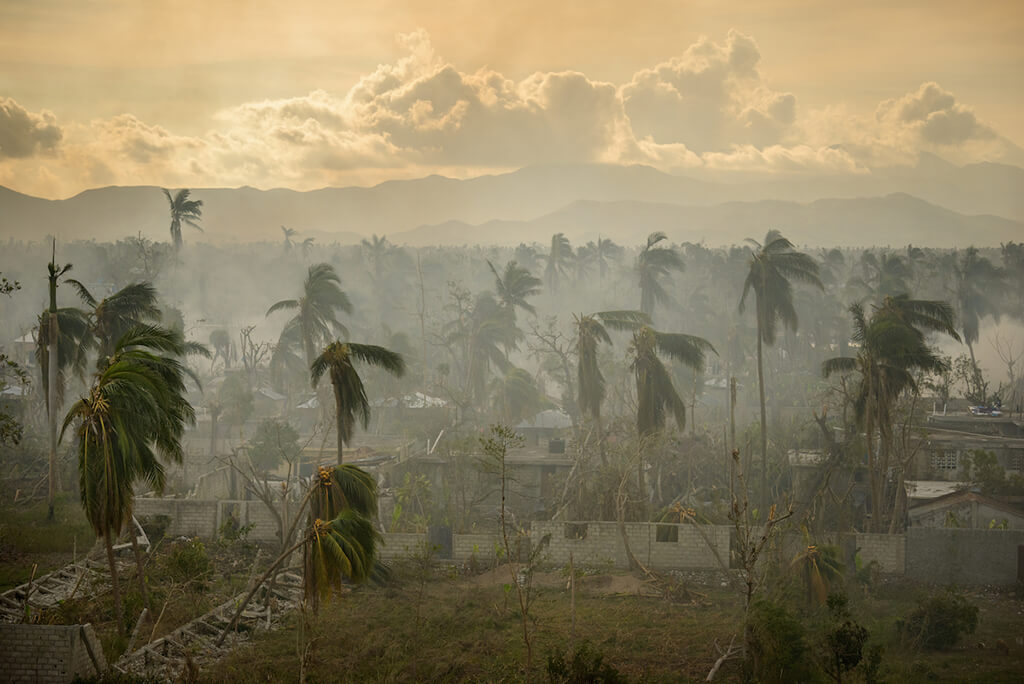 Less than two weeks before Hurricane Matthew struck Haiti, Secretary of Homeland Security Jeh Johnson had announced that the United States would hasten the widespread deportation of undocumented Haitian migrants from the US, lifting the protections they’d been given after the fallout from Haiti’s disastrous 2010 earthquake. In the chaotic wake of Matthew, he announced these deportations would be suspended — but only temporarily.

“This should be clear: The policy change I announced on Sept. 22 remains in effect, for now and in the future,” Johnson said. “DHS intends to resume those flights as soon as possible.”

The impacts of climate change — more intense hurricanes, bigger floods, rising seas and lingering droughts — are already making many places uninhabitable, forcing vast numbers of people on the move. But militarized borders, and the xenophobia used to justify them, have shaped a political reality in which wealthy countries like the US send migrants back to climate-ravaged lands instead of welcoming them.

Reece Jones writes in his book Violent Borders: Refugees and the Right to Move that globalization and its unprecedented flow of capital, goods, and people across political boundaries have threatened states’ control of resources and populations—and many have responded by hardening their borders. Now, he notes, “the thousands of deaths at borders and the callous inhumane treatment of migrants create an opening to question the underlying logic of the state system that is predicated on violent exclusion.”

The refugee crisis looms large in our international discourse – the war in Syria, Brexit and shirked responsibility in Europe, escalating anti-immigrant rhetoric. But the role of climate change in producing even greater numbers of migrants is still coming into focus. As the world’s most vulnerable are increasingly forced to flee, it is clear that reevaluating the global border regime is also key to addressing the disproportionate effects of climate change.

Their stories are already pouring in from all corners of the Earth, from Papua New Guinea and Bolivia to Alaska and Louisiana. Droughts in Somalia and Mexico have uprooted farmers from their fields, eroding coastlines in Kiribati and the Marshall Islands have claimed homes and washed cemeteries to the sea, floods in India and Bangladesh have driven many from rural villages into crowded urban slums.

As the enormity and complexity of this issue emerges, some basic details remain unclear. To start: the terminology. Though headlines have been quick to employ the label “climate refugees,” people fleeing climate change impacts are not currently protected by refugee status. The United Nations Convention on Refugees defines a refugee as “owing to well-founded fear of being persecuted for reasons of race, religion, nationality, membership of a particular social group or political opinion, is outside the country of his nationality and is unable, or owing to such fear, is unwilling to avail himself of the protection of that country.”

And yet “migrant” is does not address the plight of people fleeing the consequences of global warming, either. The term, once neutral, is sometimes used as a pejorative that indicates purely voluntary movement. Indeed, the UN Convention on the Rights of Migrants specifies that the term covers “all cases where the decision to migrate is taken freely by the individual concerned.” Those displaced by natural disasters are not then migrants as currently defined, and, arguably, neither are victims of slower moving climate disasters.

“In the current system, a refugee fleeing political persecution is more legitimate than a migrant fleeing a life in a filthy, crowded, disease-ridden, and dangerous slum where the only option is to work long hours in a sweatshop for very low wages,” Jones writes in Violent Borders. “Focusing only on the limited, state-defined term refugee renders other categories of migrants, who are moving for economic or environmental reasons, as undeserving of help or sympathy.”

The UN and others have frequently cited the projection that there will be 200-250 million displaced by climate change by 2050. Broken down another way, it means that in less than 35 years the world will see roughly as many climate migrants as there are total international migrants across the globe today. But experts dispute the reliability of such estimates, given the complexity of sorting out exactly if and how much climate change drives each case of migration. In some places, the impacts of climate change may be one of many underlying factors in a larger conflict that creates refugees, as in Syria, and in others, they might serve as the final straw that forces people to move from an already vulnerable region, as in Somalia.

As the paper’s author, environmental geopolitics expert Francois Gemenne alternatively puts it, reported estimates are “basically full of crap.” Gemenne and other experts will meet in Liège, Belgium in November for the first-ever Hugo Conference, to assess what’s known about the links between migration and the environment and start down the path of filling in the gaps. The conference will also launch the Hugo Observatory, a research outfit dedicated to these issues, at the University of Liège.

“We've got a lot of progress, in terms of quality research, to understand why people moved,” Gemenne continues. “But what we don't yet get is how many people are being displaced at the moment because of environmental changes and how many people will be displaced in the future.”

Naidoo said this in September, just as the UN was hosting their first ever Summit for Refugees and Migrants, in the face of what it called “an unprecedented level of human mobility.” The task was to lay out a new path for addressing this crisis as it exists now.

It’s recognized that the UN’s refugee system, created in the aftermath of World War II, is outdated and dysfunctional. Though protections for refugees exist, states are not upholding their responsibility to support and protect them. Migrants have never had any special protections. Given that those displaced across borders by climate change are not fully captured by either group, as one UN refugee agency advisor has said, “we’re looking at a gaping legal hole.”

At the summit, more than a dozen world leaders spoke of climate change as a key factor in migration, and the resulting document, the New York Declaration for Refugees and Migrants noted in its introduction that people are migrating in “response to the adverse effects of climate change, natural disasters (some of which may be linked to climate change), or other environmental factors.” But the declaration was roundly criticized as hollow and lacking in necessary urgency or any real commitments.

“This rhetorically expands the set of things that states ought to do for refugees and migrants,” the Washington Post reported. “However, it does nothing to stop noncompliance and neglect within the existing framework.”

This is perhaps no surprise. As Jones points out, the UN’s founding principles undermine the urgency of addressing shared responsibilities. He writes, in the context of a global climate change agreement, “after all, the UN, which is the primary institution for climate negotiations, preserves the sovereign rights of states over the needs of the global environment.”

This uncertainty over terms, numbers and international cooperation is now meeting the global reality of states’ tightening grip on their resources and people.

The rise of far right parties throughout the European Union and their stance against immigrants as a near “common denominator,” as one Hungarian nationalist politician put it to BuzzFeed, is well established. The refusal of many wealthy European countries to take in refugees and migrants is at the root of the ongoing crisis. Elsewhere, there are large numbers of internally displaced peoples due to climate change, as in Bangladesh, which almost totally surrounded by the viciously guarded Indian border. Jones notes it is here, not the US-Mexico or EU borders, that has seen “highest number of deaths at the hands of a state security service.” He notes that India’s Border Security Force has killed more than 1,000 Bangladeshi civilians since 2000. Rather than face this fate, many rural Bangladeshis are migrating within the country, from the increasingly saltwater-flooded countryside to the slums of Dhaka.

In the US, the Pentagon has long taken the stance that climate change is a top national security threat, citing increased migration as one reason. This year, the agency drew up a plan to integrate climate change as a priority in their operations, down to training and weapons acquisition (Congress has so far blocked its funding). Stephen Hadley, former national security advisor to George W. Bush and current member of the State Department’s Foreign Affairs Policy Board, said at a recent Washington, D.C. event that “Climate change and a lot of other economic dislocations have put a lot of people out of work. They are on the move and they have no place to go and it means they are recruiting grounds for terrorists and extremists and potential refugee flows that will tax Europe even more."

Secretary of State John Kerry and Senator Bernie Sanders have made similar comments. “If there is not enough water, if there is not enough land to grow your crops, then you’re going to see migrations of people fighting over land that will sustain them,” Sanders said in 2015. “And that will lead to international conflicts.” That climate migration will lead to large-scale conflicts is more than likely, but it’s important to note that such assertions also accept the continued dominance of a harsh, exclusionary border regime. This is probably a safe assumption. In the final presidential debate, leading candidate Hillary Clinton was careful to clarify that “we will not have open borders.” Though she touts her position on easing the path to US citizenship, a look back at 2013 shows that Clinton has previously supported billions in increased border enforcement.

Having kicked off with its New York declaration, the UN is now working toward two separate “global compacts” – one on refugees and another on migrants -- for 2018. As this new response takes shape it will be informed by ramped up efforts from academia, governments and civil society, including projects like state-led Platform on Disaster Displacement, which builds on the Nansen Initiative that consulted from 2012 to 2014 around the globe on climate change and disaster displacement. Nansen Initiative players are also addressing human mobility within the UN’s climate framework.

This is all taking place as the UN has named its former High Commissioner on Refugees António Guterres to its top position as Secretary General, and as the International Organization for Migration join officially joins the UN. Whether this work will translate into more humane border practices remains to be seen. Without sustained outside agitation, it’s highly unlikely that state and UN-led efforts will push for a general reconsideration of violent state systems of control as they exist now.

It’s worth remembering that Jeh Johnson announced expanded deportations of Haitian migrants three days after the UN declared, “profound solidarity with, and support for, the millions of people...forced to uproot themselves and their families from their homes.”