40% off EVERYTHING!
about 1 month left
Treva C. Ellison
comments

The Disorder of Law and Order ― Free Bresha Meadows!

Bresha Meadows, a 15-year-old black girl charged with aggravated murder for killing her abusive father, must be free. According to Treva C. Ellison, Bresha’s case is a casualty of “law and order” carceral violence, which renders racialized and poor victims of gender and domestic violence as surplus. Treva C. Ellison is an Assistant Professor of Geography and Women, Gender, and Sexuality Studies at Darthmouth College and an inter-disciplinary scholar whose research focuses on criminalization, carceral geographies, and social movements in the United States with an emphasis on gender and sexuality. 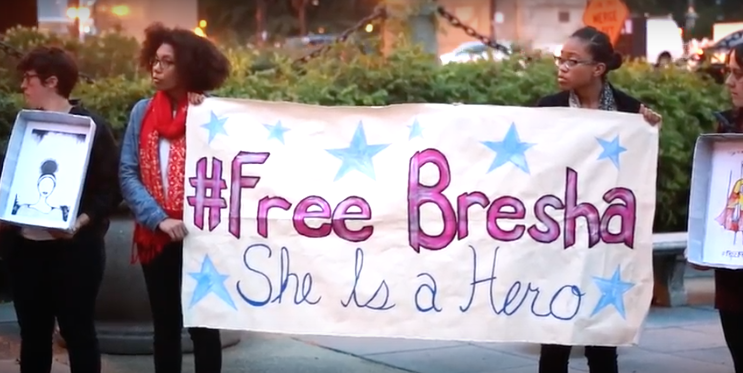 Screenshot from Free Bresha: A Night of Abolitionist Art and Action.

We are on the eve of a presidential election that has illuminated, with great intensity, the productive and deadly symbiosis of racial difference and capital accumulation, what Cedric Robinson calls “racial capitalism.”  The Jericho walls of American exceptionalism are shaking: the economy is volatile and so-called statistical economic recovery cannot make up for the lived experiences of wealth polarization, poor healthcare, homelessness, and carceral violence. A revival of “law and order” has been presented in the current presidential election as a balm to sooth the sting of a declining quality of life, refracted through the rhetoric of white victimhood. We already know that law and order is a highly-rated subprime political asset, one that draws on fears of economic and social instability and attempts to direct that fear towards the people who are most vulnerable (and resistant) to racial capitalism’s creative destruction. As an instrument of politics, law and order may have a high payout for elected officials, but as an instrument of speculative safety, it rarely produces anything but debt for everyday people. I want to draw our attention to the disorder of law and order, the routines and episodes of ethical absence that facilitate its circulation.

Bresha Meadows is a 15-year-old Black girl from Ohio who likes to read books about animals. Bresha is also one of the 15.5 million children in the United States who has had to witness domestic violence and one of the 7 million children living in a family with severe domestic violence. Bresha’s mother, Brandi Meadows described the abuse she faced in her relationship with her husband and Bresha’s father, Jonathan Meadows in a civil domestic violence protection order she filed in 2011: “In the 17 years of our marriage, he has cut me, broke my ribs, fingers, the blood vessels in my hand, my mouth, blackened my eyes. I believe my nose was broken…If he finds us, I am 100 percent sure he will kill me and the children … My life is like living in a box he created for me, and if I stepped out of that box, he’s there to put me back in that box.”

On July 28, 2015, Bresha Meadows, then 14 years old, was taken into custody after allegedly shooting her abusive father while he slept. The gun Bresha allegedly used was one that her father, Jonathan Meadows had used repeatedly to threaten the family in the past. Bresha’s case is a tragic example of the choreographed disasters and routines of planned abandonment that constitute law and order. Bresha did everything she could to get herself and family away from her father: she ran away twice, she told her aunt, Martina Latessa, a domestic violence detective with the Cleveland Police Department, and she told Child Services. Bresha’s case underscores how law and order is enforced through normalized lapses of legally encoded and/or socially accepted ideals like freedom, rights, justice, due process, bodily autonomy, and self-determination – in other words, zones of ethical absence.1 Ethical absence is the historically accrued contradiction between the putative rights afforded to modern subjects, and the “state-sanctioned of extralegal production and exploitation of group-differentiated vulnerability to premature death.”2 Sites of ethical absence help us to locate all that we are asked to forget in order to imagine law and order as a successful modality of producing safety—namely, black and brown lives. Bresha’s aunt, Martina Latessa, whose job it is to investigate domestic violence cases remarked in an interview with Amy Goodman that when Child Services interviewed the family about the abuse claims, they interviewed Brandi and Jonathan Meadows together, which goes against best practices for investigating domestic abuse claims. She also noted that when Brandi Meadows filed a civil protection order in 2011, there were and continue to be little to no resources to support relocation for survivors of domestic violence. Because Brandi Meadows did not admit to the abuse during the Child Services interview, despite the prior civil protection order filed in 2011, Child Services returned Bresha to the house. Zones of ethical absence are the dark spaces where the failure of law and order to reduce harm is re-issued as a warrant and warning against “individual criminal behavior,” or so-called group and cultural pathologies.

Bresha has been in custody at the Trumbull County Detention Center for the past 100 days, during which she has been placed on suicide watch and her family and loved ones have been fighting to get her released pre-trial. Bresha’s case focuses our attention on the disorder of law and order and its mechanisms of punishing the racialized poor: pre-trial detainment, the criminalization of self-defense and the ways gendered and sexual violence are surplus to law and order. Law and order punishes people for being poor; we know that pre-trial release is one of the factors that heavily impacts the extent of sentencing. People who cannot afford bail, or are denied bail are more likely to receive guilty verdicts and harsher sentences; being in custody confirms for juries and judges that you are where you should be. A recent study of misdemeanor and felony cases in Philadelphia showed that being detained pre-trial increases the likelihood of a guilty verdict by 13% on average. Currently, 34% of people awaiting trial in the US are unable to pay bail and represent the poorest third of Americans and 70% of the US county jail population are awaiting trial.  Municipalities implementing with bail reform have found that pre-trial release does not significantly deter people from appearing in court; people want to live their lives. We also know that people of color, especially survivors of domestic abuse and sexual violence are often not able to successfully use self-defense as legal strategy. I am thinking now of Marissa Alexander, CeCe McDonald, Ky Peterson, Patreese Johnson of the New Jersey 4, and Banya Lekheim El-Amin, all Black people who have been given double digit sentences for defending themselves against violent attacks, some of which include instances of domestic abuse and sexual assault. These cases hinge on sexual and gendered violence being surplus to the rhetoric and practice of law and order.

Forms of gendered and sexual violence like sexual assault and domestic abuse only became recognizable criminal categories after decades of organizing, and the reliance of anti-violence movements on law enforcement approaches to dealing with violence against women: mandatory arrests, no-drop prosecutions, and sentence enhancements, have not actually reduced violence against women and have deepened criminalization of women of color, especially black women. When I say that gender and sexual violence are surplus to law and order, I mean that not only are these kinds of violence excessive to the aims of law and order, but that they actually supply value to the logic and practice of law and order and to the gender and sexuality as categories of social organization. Law enforcement approaches to gendered violence position the state as the arbiter of conflict and abuse, distracting from the ways gendered and sexual violence function as an externalization of the violence of capitalism and the racial state.3 Law enforcement approaches to gender and sexual violence also re-inscribe gender and sexual norms, which, materialist feminist scholars argue, produces unacknowledged surplus value in a capitalist political economy.4 For example, Ky Petersen, a black trans man from Georgia who killed his rapist, did not use self-defense as a strategy for his case because his public defender refused it, saying that Ky would not be believable to juries as rape victim. When people fall through the cracks of domestic violence and sexual assault laws, the solution is often to give officers better and more training, drawing more money away from housing, relocation resources, towards law enforcement. This logic abstracts the ways domestic violence and sexual assault are intertwined with disappearing forms of and streams of economic power. While Donald Trump has tacitly condoned sexual violence in his speech and practice, legitimizing current and future iterations of Brock Turner and Daniel Holtzclaw, carceral feminist Hillary Clinton’s imperialist foreign policy also supports gendered and sexual violence. Clinton has been criticized for supporting a coup in Honduras that among many detrimental impacts, has lead to a surge in femicides; a month after the July 2009  military coup that removed Manuel Zelaya from power, there was a 60% increase in murders of women; the bodies of over 50 murdered women were found dead in the streets of Tegucigalpa and San Pedro Sula. While discussions about Trump and Clinton have circulated around corruption and rape culture, cases like Bresha’s which fall out of the affective scope of protecting white women, function as the surplus, fleshy archives of the inherent disorder of law and order.

Currently, the Mahoning Valley Organizing Collaborative and the Survived and Punished Coalition are organizing to pressure the Trumbull County prosecutor to release Bresha Meadows and drop all charges against her. They recently presented a petition to drop all charges against Bresha that has garnered over 22,000 signatures to Trumbull County Prosecutor, Dennis Watkins. Survived and Punished is a new coalition of activist and scholars across the US working to politicize the zones of ethical absences that uphold the racist application of domestic violence law. By bringing an abolitionist perspective to the infrastructure of domestic violence advocacy, the work of Survived and Punished recognizes law and order as the cudgel of racial capitalism and force of violence against poor women and women of color. Their work insists that we cannot live without our lives, and reminds us that some of the most vital work of imagining and fighting for abolition democracy occurs between and in spite of election cycles.

1) The idea of ethical absence comes from Denise Ferreira da Silva's argument in Towards a Global Idea of Race (Minneapolis: University of Minnesota Press, 2007), that race functions as a modern global organizing concept because part of the project of Western Enlightenment was the triumph of reason and logic, which privileged Europe and Europeans as modern subjects, simultaneously rendering non-European people and places as outside of the realm of rational subjecthood and universal ethical ideals of self-determination and self-actualization. See Da Silva, Denise Ferreira. Toward a global idea of race. Vol. 27. U of Minnesota Press, 2007.

3) For example, after High Desert Prison opened in Susanville, California, Linda McAndrews, director of Lassen Family Services, a domestic abuse and rape service provider, reported that she received 3,000 crisis calls from women in a single year in a town with a free-world population of 6,900. See: http://curbprisonspending.org/wp-content/uploads/2013/09/HTSPcpmp.pdf.