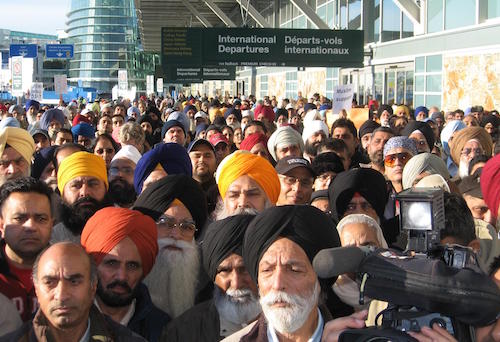 Protesters blockade Vancouver International Airport to prevent deportation of Lalibar Singh, December 2007. via No One is Illegal Vancouver.

Things are often clearer from the outside. I currently live in Mexico, where the stakes of a Trump presidency are so obvious that his unexpected victory has provoked the worst collapse in the peso in nearly a decade. Here, the left-wing daily La Jornada recently put things as clearly as they need to be put: “There is a difference between legal and legitimate,” and the outpouring of street protests that greeted Trump’s election have made this difference perfectly legible. Just because Trump was legally elected doesn’t mean we need to accept his presidency — and much less his racist, xenophobic, and misogynistic ideas — as legitimate.

This distinction between a legal election and a legitimate presidency seems to have been lost on Democratic party leaders and even many Hillary Clinton voters, however. Despite decrying Trump as a would-be dictator, Clinton and others have quickly pivoted, not only accepting the election results, but even sanitizing and whitewashing Trump. At best, many Clinton supporters are appealing on a technicality by calling for the (admittedly long overdue) abolition of the electoral college, or calling their elected representatives to protest the most recent indicator of what Trump has in store.

While Clinton and others roll over and play dead, the contours of the Trump agenda are becoming increasingly visible. By tapping the overtly white supremacist Breitbart editor Stephen Bannon as a close advisor and too-racist-for-Republicans senator Jeff Sessions for attorney general, Trump has made brutally obvious what no amount of normalization can conceal. Of course, Trump is a crony and a capitalist — perfectly illustrating the inseparability of the two — but he is also a career racist and a demagogue who has summoned the specter of a coming race war, a specter that would not go quietly even if he wanted it to.

While Trump’s victory speech called for unity and binding “the wounds of division,” it is increasingly clear that his will be a government by and for a fearful white majority that will continue to roll back civil rights, voting rights, and reproductive rights — already gutted and meager — while stoking fear of Muslims, giving police free rein to murder Black Americans, and heaping the blame for economic insecurity onto China from afar while demonizing migrants at home.

It’s clearer every day that we must fight Trump, openly, directly, and by any means, and that there are hundreds of thousands willing to take that fight to the streets. But how? It’s time to chart out a strategy for radical direct action against Trump and everything he stands for. This strategy will emerge on multiple levels and will have many facets, from a proposed general strike and direct actions to shut down Trump’s January 20th inauguration, to smashing any celebrations by the Ku Klux Klan, to directly confronting racism, xenophobia, and misogyny wherever and whenever they rear their ugly heads.

But one question will be strategically central for resisting a Trump presidency: migration. While Trump softened his rhetoric on many issues immediately after the election, he doubled-down on plans to immediately deport or incarcerate millions of migrants. There is every reason to take this threat seriously, and many of the more than half a million who have registered for Deferred Action (DACA) are rightly worried not only that Trump will immediately scrap the program, but that he might use their registration information to speed deportation. While many upset by Trump’s election are already pledging to reinforce and expand sanctuary city programs, these appeals must be supplemented by a strategy of mass action to obstruct deportations and to make Trump’s ambitious plans literally impossible to carry out.

Luckily, this strategy won’t have to start from zero, but will instead build on spontaneous and organized efforts by communities nationwide. For years, organizers across the U.S. southwest and beyond have been deepening resistance networks in undocumented communities, beginning with an everyday culture of resistance and disobedience: neighbors warn neighbors when they see Immigration and Customs Enforcement (ICE) operating in the neighborhood, even some with papers refuse to show them, and it’s not uncommon to see someone on the side of the road with an improvised sign warning of checkpoints up ahead. Other, more organized efforts have seen the establishment of nascent rapid-response networks that have actively sought to obstruct ICE by warning residents and even blockading homes to prevent deportation raids from being carried out.

Even before Arizona leapt to national attention with the approval of the anti-migrant SB 1070 legislation in 2010, ICE was actively carrying out raids with the support of local law enforcement, and communities were organizing to resist them. One organization that was involved at the time is Arizona’s Repeal Coalition, active in Phoenix and Flagstaff as early as 2007. As the name suggests, the group coalesced around the demand to repeal all anti-migrant legislation, coupled with the sweeping insistence that all communities be able to “live, love, and work wherever they please.”

Cecilia Sáenz Becerra, a member of Phoenix Repeal at the time, explained to me how Repeal’s capacity to resist ICE didn’t emerge overnight, but was instead built gradually over time through the slow work of relationship-building with undocumented women in a trailer park community: “by accompanying folks to get state benefits for their children, helping find loved ones in the deportation system, being there emotionally, playing with children, and sharing meals.” Even though these were everyday activities, they were often infused with political debates, analysis, and strategizing. Building relationships locally then made it easier for affiliated out-of-town organizers to plug in on the ground and contribute to resisting ICE on a full-time basis, and trust grew even further as organizers responded in moments of crisis.

According to Repeal member Luis Fernandez, those organizing further north in Flagstaff began with a door-knocking campaign in those communities most likely to be targeted by ICE raids. “The night we held a community meeting with some 80 people, ICE raided the neighborhood that Repeal was working in. As an immediate response, young activists in town organized an ICE Watch, driving around the neighborhoods and observing the movements of the ICE officers.” Communicating by text message, organizers and community members formed a spontaneous rapid-response network that warned neighbors and sought to obstruct ICE raids when the happened. According to a Freedom of Information Act (FOIA) request filed by the ACLU, ICE admitted that community resistance had dramatically limited the agency’s ability to carry out deportation raids.

Further north in Canada, Vancouver’s No One Is Illegal was simultaneously engaged in an inspiring display of mass civil disobedience to prevent the deportation of a paralyzed refugee, Laibar Singh. Using a combination of street protest and direct blockades, organizers rapidly mobilized 2,000 supporters to blockade Vancouver’s international airport on December 10th 2007, surrounding the vehicle in which Singh was traveling, and forcing the government to back down. While Singh ultimately self-deported as a result of official state harassment and racist demonization by Canadian society more broadly, the case was a flashpoint for struggles around Canadian immigration and deportation policy.

In the words of Harsha Walia, a South Asian migrant justice organizer involved in the Singh campaign, the importance of direct resistance to deportations extends far beyond the individual cases: “At a time of emboldened white supremacy and state violence, our defiance as oppressed peoples is vital in affirming our self-determination and power. Direct action is not only an effective form of resistance, but an inherent part of the broader process of nurturing our individual and collective revolutionary consciousnesses. In this sense, direct actions aren't simply about militancy but about building our collective power to feel emboldened rather than disempowered.” And feeling emboldened means building a culture of resistance that only leads to more power in the long-run.

Direct action against deportation works, both tactically — to hinder ICE’s functioning while concretely protecting some from the hell of deportation — but also politically, as a tool for mass mobilizing and to provoke a national debate over the freedom of movement. Moving forward, organizations with deep roots in local communities will prove crucial relay points for a broader anti-deportation strategy, building the necessary infrastructure locally while networking nationally and shepherding volunteers and organizers into mass, mobile flying squads capable of obstructing ICE’s work by warning communities and physically preventing raids from being carried out.

While migration will be strategically central to resisting Trump’s white supremacist agenda, however, it is in no way separable from the anti-Blackness and Islamophobia on which Trump’s popularity rests. In fact, one strength of direct action lay in the barriers it helps to break down and the new collective identities it helps to forge, enacting powerful new solidarities that defend the most vulnerable and put into practice the motto that an injury to one is an injury to all. Within migrant communities, this means for example defending DACA while at the same time refusing the arbitrary division it introduces into migrant communities, between those deserving and undeserving of deferred status — and it means fighting all deportations, regardless of status or criminal record.

More broadly, it means recognizing that the migration question is much bigger than the southern border, and instead calling into question the historic divisions among white, Black, and Latino workers on which U.S. capitalism has always relied. After all, Afro-migrant organizations have long sought to unite Latino and non-Latino African and Caribbean migrants in a broad front against ICE, and groups like the Repeal Coalition consciously resist the temptation to build migrant organizing on the anti-Black language of good workers versus bad criminals. And if it needs to be said, Islamophobia is nothing if not also an immigration issue.

Trump himself made all of these connections perfectly clear by announcing that his plans are to “deport or incarcerate” migrants, and by amping up the language of criminalization to do so. It’s no surprise that the internal and external faces of the coming white supremacist offensive — the Fraternal Order of Police (FOP) and the National Border Patrol Council — both endorsed Tump. While we must attack and disrupt ICE’s capacity to deport, we also need to recognize that the alternative may be to cage migrants indefinitely, and that the struggle against deportation is intimately bound up with the broader struggle against racist police violence and mass incarceration.

The tactics we choose for this struggle will not all be legal, but they are legitimate tools in a legitimate struggle. And if migrants among others are condemned to exist in a gray area outside the protection of the law, then for the next four years if not many more, those struggling against white supremacist backlash will need to similarly push the strategic envelope and occupy the gray area that we enter as soon as we refuse to accept Trump’s legitimacy. Direct action tactics will also bring conflict with the various racist paramilitary organizations operating along the border, whose ranks will be swelled by those recently mobilized Trump supporters already terrorizing people in the streets.

Again, we are fighting for a legitimate cause, but this doesn’t mean that everything we do will be legal — in fact, no real change ever happens without breaking the law. There will be repression, arrests, and legal battles to come — this much is inevitable. We will confront difficult questions about how to physically defend and strengthen our movements for the long struggle ahead. But as the Democratic Party, the media, and the U.S. liberal establishment scurries around normalizing openly white supremacist rule by shameless misogynists, we must chart a different if dangerous path of resistance.

George Ciccariello-Maher is Associate Professor of Politics and Global Studies at Drexel University in Philadelphia. He is the author of We Created Chávez: A People’s History of the Venezuelan Revolution, Building the Commune: Radical Democracy in Venezuela, and Decolonizing Dialectics.