40% off everything on our site!
17 hours left
David MaddenPeter Marcuse
comments

Whose Crisis? For the oppressed, housing is always in crisis

In this excerpt from In Defense of Housing: The Politics of Crisis, authors David Madden and Peter Marcuse return to Engel's The Housing Question to show that while there are temporary crises of housing, the use of "crisis" is better served to highlight the ways that the contemporary housing system is unsustainable by its very nature.

In Defense of Housing, along with Vertical: The City from Satellites to Bunkers by Stephen Graham, are 40% off (with bundled ebook and free worldwide shipping) until Friday, November 25th. 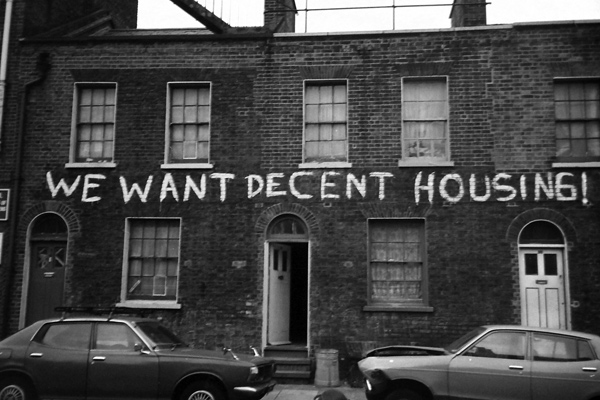 Critics, reformers, and activists have invoked the term “housing crisis” for more than a hundred years. The phrase once again became pervasive after the global economic meltdown of 2008. But we need to be careful with this usage of the concept of crisis.

The idea of crisis implies that inadequate or unaffordable housing is abnormal, a temporary departure from a well- functioning standard. But for working-class and poor communities, housing crisis is the norm (14) Insufficient housing has been the mark of dominated groups throughout history. Engels made exactly this point:

The so-called housing shortage, which plays such a great role in the press nowadays, does not consist in the fact that the working class generally lives in bad, overcrowded or unhealthy dwellings. This shortage is not something peculiar to the present; it is not even one of the something peculiar to the modern proletariat in contradistinction to all earlier oppressed classes. On the contrary, all oppressed classes in all periods suffered more or less uniformly from it (15).

For the oppressed, housing is always in crisis. The reappearance of the term “housing crisis” in headlines represents the experiences of middle-class homeowners and investors, who faced unexpected residential instability following the 2008 financial implosion.

The idea of a housing crisis is politically loaded. Though the concept of crisis has a long history in critical theory and radical practice, it can be deployed for other purposes. In the United States, the discourse of housing crisis is often used to condemn state “interference” in housing markets. In the UK, the crisis frame is invoked in support of granting new legal powers to developers in order to override local planning guidelines.

Discrete moments when housing crises become acute tend to be interpreted away as exceptions to a fundamentally sound system. But this is an ideological distortion. The experience of crisis in the residential sphere reflects and amplifies the broader tendencies towards insecurity in capitalist societies. Housing crisis is a predictable, consistent outcome of a basic characteristic of capitalist spatial development: housing is not produced and distributed for the purposes of dwelling for all; it is produced and distributed as a commodity to enrich the few. Housing crisis is not a result of the system breaking down but of the system working as it is intended (16).

We should reject ideological versions of the concept of housing crisis. But the term is still useful. For those compelled to dwell in oppressive and alienating conditions, housing crisis is not empty rhetoric; it is daily reality. To millions of households, “crisis” describes precisely the chaos, fear, and disempowerment that they experience. The state of their housing is critical indeed.

Our objective, then, is not to argue for the resolution of some temporary crisis and return to the status quo. We use the concept of crisis to highlight the ways that the contemporary housing system is unsustainable by its very nature. We point to the crisis tendencies in housing under contemporary capitalism, in order to draw attention to the urgent but systemic character of these problems.


Vertical: The City from Satellites to Bunkers and In Defense of Housing: The Politics of Crisis are 40% off until Friday, November 25th at midnight UTC. Includes free shipping and free bundled ebook.

14 See Peter Marcuse and W. Dennis Keating, “The Permanent Housing Crisis: The Failures of Conservatism and the Limitations of Liberalism,” pp. 139–62 in Bratt, Stone, and Hartman, A Right to Housing.