40% off EVERYTHING!
about 1 month left
Philippe Douroux
comments 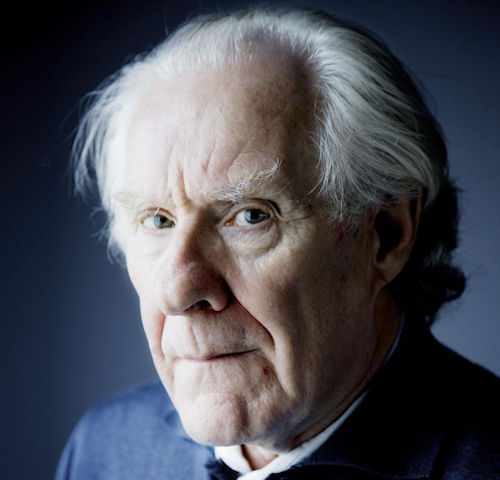 His audience was there. 280 people in front of him, and thirty others in the hall before a screen, on the lookout for others leaving so that they too could enter the "cave" and face the master. An equal mix of men and women, the old and the young — mainly older, it should be said. None of them are dressed eccentrically, though there are sometimes some flashes of colour like orange or yellow trousers, or a bright yellow scarf with Indian motifs, doubtless a hangover of the 1970s. At the moment that everyone was about to go their separate ways, soon before midnight that evening, he even earned a standing ovation. That tells us how fervent his audience is.

On the early afternoon of 16 January Alain Badiou was alone on the stage of the Théâtre de la Commune in Aubervilliers, Seine-Saint-Denis, where he found shelter for his philosophy seminar. He was wearing a big jumper of no confirmed colour — a formerly white beige, or almost a formerly beige white. He would have said it was "indiscernible" or "undecidable." Alain Badiou held his last session — transformed into a performance — in which philosophy mixed with theatre, mathematics, and poetry, the four cardinal points of his life. Politics, which he defines as the "process of the real transformation of the laws of the world, be they the laws of the economy, society, or the state," was not wholly absent, but it was kept a bit on the sidelines. It was only spoken about a little or not at all.

"His audience": Alain Badiou himself used this expression one Friday morning last September when Ali Baddou asked him on France Inter whether the youth to whom he addressed himself in his latest book The True Life should change the world by voting and the ballot box 1. The philosopher gagged slightly, then swallowed: "Listen… If I said that, I would risk letting down my audience. For every day we see that change through the ballot box very much resembles stagnation." A man who has not voted since 1968 went no further down the road of subversion than calling for a demonstration uniting young and old.

Across the over forty years that he ran a seminar, he seemed like he would never have to stop. And then he fixed a date: he wanted to stop on 16 January 2017, just after celebrating his 80th birthday, inviting "his audience" to come to the banlieue. "Thanks for coming for this… I don’t know what. A last day of seminars before becoming an octogenarian." He laid down the milestones of his work: Being and Event (1988) and universality, Logics of Worlds (2006) and particularity, and the coming The Immanence of Truths, or "the absolute." A seminar led to a book, conversations led to writing, which led to another question. And this time, the question did not come: "This time I no longer have an idea of what I could do. After a philosophy of the absolute, nothing else comes other than the sinister. Hell, perhaps."

So thus far he had run a seminar: not really a course, or a brain-storming workshop, but something in between the two. Mathematicians — his friends, or else his enemies — invented seminars at the beginning of the twentieth century. There was talk of the Hadamard seminar, the Cartan seminar, or the Grothendieck seminar, which Badiou could have been close to. In philosophy there was the Badiou seminar, which began as the 1970s were finishing and people were starting not to believe in anything any more.

If we take things as they come, or as they happen, we have to begin with the Maoist Badiou, the tough leader of the Union communiste de France marxiste-léniniste who saw a radiant future arising in the East. 1968 left them a taste of unfinished business. He left the PSU (Parti socialiste unifié) — of which his father had been one of the founders — and committed to pro-Chinese gauchisme. The millions who died in the Cultural Revolution counted for nothing. In 1966 the Red Guards had no time to do anything but erect the platforms on which the guilty would be exhibited — and they were surely guilty, simply because they had some cultural, social, or economic capital, however modest.

Alain Badiou did not have time to meet us, as he was too taken up by the festivities. We will have to wait for the publication of his next book. He preferred to refer us to a "crystal-clear" text entitled "On Politics Today" in his Greece and the Reinvention of Politics 2. Point 1: in the West "there is no longer anything more than a single politics: which is to say, no politics. Many people have now more or less clearly understood that since capitalo-parliamentarism is a single politics, it is not a politics at all. But instead of turning toward the creation of a new communist politics they rather more often turn toward the camp of political scepticism." Such is the case of Nuit Debout, Syriza, and Podemos. Point 2: "The truth that we must everywhere remind ourselves of is that it is first of all the current dominant world — liberal domination — that suppresses politics. Yet ultimately that is also what the socialist régimes established in the twentieth century ended up doing. From Stalin onward, with the exception of Mao during the Cultural Revolution, they depoliticised the situation." Except Mao… and the Cultural Revolution? The philosopher’s longtime friend François Nicolas, a former École polytechnique student and now a composer, delivers what he knows to be an authorised answer. Nicolas has taken up refuge at the IRCAM [Institut de recherche et coordination acoustique/musique] where he has set up a Mamuphi (maths, music and philosophy) seminar seeking to establish links between each of these disciplines. He points to Robespierre, Saint-Just, and capitalism’s millions of dead; against all this, the millions of dead of the Cultural Revolution do not count for much.

What are the requirements of "doing politics"? Alain Badiou proposes four unavoidable foundations: abandoning private property, ending the division between manual and intellectual labour, the end of nations, and the end of the state. Faced with such a mountainous objective, electoral arithmetic is no problem.

We can look at Badiou’s trajectory. The cultural capital he had to begin with was enormous. His father was a great Resistance fighter, founder of the PSU and professeur agrégé in mathematics; his mother was agrégée in letters [an agrégé is a laureate in a competitive education exam]. He chose the "centrist route" in choosing to become an agrégé in philosophy. However, he soon got to the margins, the periphery, and oppositional experimentation, taking his leave from the knowledge-institutions reserved for a caste. This ENS (École Normale Supérieure) student came to the University of Vincennes after May 1968. There, they did away with the past, grades, teacher-pupil relations, and all hierarchy and authorities. But like many others Alain Badiou would get back to the centre and the summit of the cultural engine. After leaving the Gauche prolétarienne Alain Finkielkraut would end up in the Académie française. Alain Badiou made the journey from Vincennes — now Saint-Denis University — to the ENS on Rue d’Ulm, where he became a professor in 1999, at 62 years of age. For their part Gilles Deleuze and Jean-François Lyotard would remain loyal to the university of all possibilities. True, both of them had an international recognition easily worth any "institutional recognition," to use the same terms as Boris Attencourt — an EHESS (Ecole des hautes études en sciences sociales) doctoral student and author of a parallel history of the trajectories of Alain Badiou and Alain Badiou in issue 1 of Zilsel journal, January 2017 3. What should we take from Badiou? Boris Attencourt quotes the philosopher Catherine Clément: "The Maoist Badiou interests me rather little, the polemicist Badiou quite often saddens me, but for me that’s fine. I like him because of something else."

So we have to find this "something else" which makes the philosopher useful to us. We can criticize him for having remained a communist, but in these times of despair he still opens a few doors that have too often been locked up. What he does offer is that he always chooses the camp of infinity. Trapping the human within a finite number of solutions is called conservatism. Accepting physical, metaphysical, or economic limits is accepting what we are. Implying: there is no way out. Alain Badiou says something else, and goes in search of poetry, theatre, culture, and love in order to offer a perspective for women and men.

Perhaps this is the "something else" that Catherine Clément mentions, and which his numerous readers in France, the United States, and elsewhere are looking for. He publishes too much for some, who criticize his bookish chatter as sophistry. Well yes, he broods over things and keeps banging on about them, but what he most importantly says is that another world is possible. The question that comes next is: how? And there the debate resumes. Vanity Fair revealed one of his projects: to make a Hollywood film of Plato’s life, with Brad Pitt as his "dear Plato." Badiou on Venice Beach: absolute ecstasy.