France’s second presidential debate took place over four hours last night, with all the candidates assembled together for a political debate for the first time in history. Sebastian Budgen walks us through the five leading contenders and the six other hopefuls making up these Real Humans.

Sebastian Budgen is an editor for Verso Books and serves on the editorial board of Historical Materialism.

The second French presidential debate took place yesterday, and could there be a better reason for staying up all night? It was the first occasion in which all eleven candidates were present, with equal speaking time (the whole thing lasted four hours and ended after midnight), so it had something of an “open mic night” character for the smaller pretenders, from the two right sovereigntyist groupuscules, via Jacques Cheminade of the LaRouchite cult, through to the far-left Nathalie Arthaud (of Lutte Ouvrière) and Philippe Poutou (Nouveau Parti Anticapitaliste). 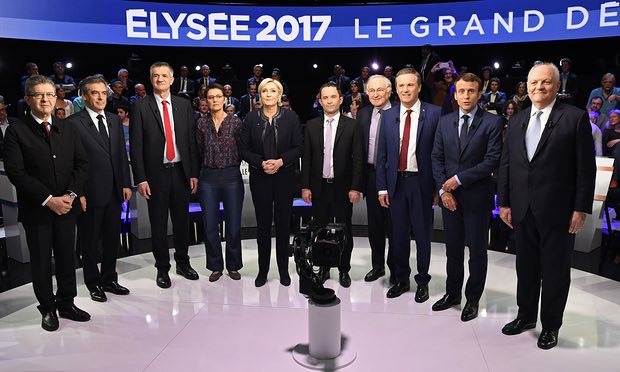 For some of these candidates, being able to participate in the election is a remarkable achievement in and of itself: to stand they needed the signatures of 500 elected officials, and given that the main parties have sewn up all their senators, deputies, councillors and the like, the only real options are the mayors of small – or very small – villages in rural France. An enormous amount of energy has to be expended for months, or even years, by the smaller organisations to get this precious bounty. And while you might imagine that this is some kind of rural idyll – the landscapes! The local cheeses and wines! The winding roads and barns of la France profonde! – it is actually an exhausting and frustrating process. Most times, the smaller mayors are full-time farmers or have other activities, so it’s hard enough to track them down in the first place, and once located, more often than not they have (or claim to have) already pledged their signature for another candidate, or else don’t even want to engage in a discussion. Some organisations– such as the highly disciplined Lutte ouvrière, which prides itself on being able to gather and register the signatures before even the big parties (the Lambertists also, before their recent split, also made this a point of honour) - are very efficient at this process, whilst others, such as the NPA, which characteristically slouched in at the very last moment,* have to engage in a great deal of huffing and puffing. Yet others, such as the LaRouchites, one imagines, must spend their whole inter-electoral period concentrating on this activity.

Perhaps the most striking general feature of the debate was how overwhelmingly rejected were the neoliberal themes defended by François Fillon of the right-wing Les Républicains and Emmanuel Macron of the centrist En Marche! This was already the case in the previous five-person debate, but the impression was exacerbated last night by the fact that the nine other candidates expressed anti-neoliberal/anticapitalist criticisms from across the right/left spectrum. The prime target last night for these barbs, thanks to his self-styled “Thatcherite” austerity programme, was Fillon, who did his best to maintain his phlegmatic, buttoned-up front. Macron – the silicone candidate, who increasingly looks like an android who has accidentally walked off the set of the TV series Real Humans – got off rather lightly in contrast. Clearly, it is easier to attack neoliberalism-with-a-snarl-or-a-sneer than neoliberalism-with-a-smile…

Joint winners in the category of Weirdest Candidate were Jean Lassalle, Jacques Cheminade and François Asselineau. Lassalle, a centrist MP with a very thick regional accent from the South-West, has the appearance of gentle giant and is clearly present to add some “rural local colour”. He has a remarkable face that gives a first impression of someone who has a tortured soul, but once he opens his mouth he seems to say the first thing that comes into his head. The result, compounded by a slurring delivery, mean that it is difficult to tell whether or not he is sober (too much homemade liqueur brought back from the farm?) Cheminade – who resembles an unemployed middle manager who walks around town with an empty briefcase, pretending to be busy and probably telling his family he is still holding down a job for a multinational firm – was disappointingly low-key. No mentions of the colonisation of the Moon and Mars as infrastructural fixes to the unemployment crisis, no attacks on the Windsors for their role in the global drugs trade, and no dithyrambs for Kepler, Schiller and Schubert. Cheminade’s style – leaving aside the top of head, which moves disturbingly backwards and forwards as he speaks – mixes grandfatherly placidity with bursts of manufactured rage, all of which is reassuringly odd. At one point, he told the other candidates that they should read David Graeber and Ernesto Laclau (sic.) on the question of the debt – which must be a first on national television – while citing Aimé Césaire on another occasion. Most creepy, for my money, was Asselineau. A former high-ranking civil servant for various right-wing governments before founding his sect, the Union populaire républicaine (UPR) in 2007 - on a right-sovereigntyist, anti-EU, anti-NATO and conspiracy theory platform - he has terrifyingly dead eyes and also resembles a middle manager, but more like the short-sleeved kind that works in one of those strange, neon-lit offices without a label or nameplate, which it is impossible to identify with any specific activity whatsoever. “Lobbies” and the power of the banks are a favourite trope for the UPR – which tries sometimes to infiltrate itself into spaces of the radical left (such as Nuit debout) by sticking to a line of talking exclusively (in public) about the EU – and Asselineau proposed that all presidential candidates should be prohibited from taking out a bank loan for their campaigns, to prevent them from thereby becoming the puppets of the banks. One could almost see globe-encompassing octopi in his mind as he said this. The other right-sovereigntyist candidate, Nicolas Dupont-Aignan, is only worth noting for the constant squinting and wincing that seems to betray some serious bowel troubles.

At the other end of the spectrum, it was a good night for Arthaud and Poutou. Arthaud has a certain robotrot, screechy style, with every issue other than wages and workplace struggles (and the distant revolutionary horizon) dismissed as distractions that don’t concern “the workers’ camp”. That said, she is fairly effective in her niche and it was excellent to hear her invoke the Paris Commune in the debate on the institutions and attack the double standards whereby workers and the unemployed are subjected to constant testing and controls, whereas corrupt politicians such as Le Pen get off scot-free. It was also a breath of fresh air, in an atmosphere polluted by the TV presenters’ attempts to impose a consensual conclusion, to hear a candidate say explicitly that she had no intention of “bringing together” the French.

Poutou had his first flash of glory too, with an excellent diatribe that has gone viral, openly accusing Fillon and Le Pen of corruption and “stealing from the kitty” and, responding to the latter’s retort that he seemed to be now supporting the police, he incisively pointed out that unlike elected representatives – such as his interlocutor who has refused to be questioned in the investigation into illegal financing of the FN via the European Parliament’s funds  – there is no “workers’ immunity” when they are convoked by the police, all of which provoked a wave of prohibited applause in the audience.  Factory worker Poutou was also trenchant in calling for MPs to be paid no more than an average workers’ wage (thereby rendering it a less attractive possibility for making a bit on the side and perhaps encouraging the representatives to be a trifle more sensitive to the demand to raise the minimum wage), and, like Arthaud, clearly identified with the struggles in French Guiana and distinguished himself from the securitarian consensus on terrorism, pointing the finger at the role of French imperialism. Poutou’s clash with Fillon (who muttered a pathetic threat to take him to court) and Le Pen will no doubt be greatly welcomed by many, beyond the radical Left, who feel alienated by the election, as it will fuel the journalists’ hostility towards his candidacy (“It’s not because I am not wearing a tie that you have to keep interrupting me” he said to one of the presenters). Immediately after the debate, numerous journalists criticised his “disrespectful” behaviour, consisting in turning up in casual clothes rather than a suit (arguably, he should have gone all the way, wearing his workers’ overalls, like the PS MP in the excellent TV series Le Baron noir, who comes into the National Assembly wearing his bleu de travail),** using vulgar language, calling the other candidates by simply by their surname, constantly turning his back to talk to his supporters behind him and refusing to participate in the “family photograph” with the ten others, and this will enhance his “rebel” status. Despite these welcome features, and although he has clearly improved somewhat since 2012, he is far from the ideal NPA candidate: clearly, he thinks he can get away with simply “winging it” without any serious preparation. His predecessor, Olivier Besancenot, remains far more adroit in handling such situations, both in terms of overturning the journalists’ or opponents’ aggressiveness with humour and in being able to place well-honed facts or figures as grains of sand in the mediatic doxa-machine. Were he still the candidate, Besancenot would also have been able to give Mélenchon a tougher time, pressing on the weak points and blindspots that are far from absent. Mélenchon, according to the opinion polls, seems to have won in terms of who was the most convincing candidate, and this will boost his new-found dynamism in the polls, although he had less room for manoeuvre than last time in interpellating his opponents and making jokes at their expense. Le Pen, of course, rolled out her racism and national-social programme, although with less assurance than last time - apparently, there are some renewed tensions between her and her niece, Marion Maréchal Le Pen, which, alongside the corruption charges, is one bit of good news on this front.

As for Hamon for the Parti Socialiste, he tried his best (especially in defending the public sector against Fillon), but it is becoming clear that he is the hapless victim of the “nutcracker effect”, with Macron taking the right of the PS (Valls has recently announced that he will support En Marche!’s candidate), whilst Mélenchon is attracting the left PS electorate. Hamon may indeed be a more decent figure amongst PS apparatchiks, but, frankly, this is a good thing: Delenda est le Parti socialiste, and he can always choose to participate in any unlikely-yet-necessary radical-left recomposition after the end of the electoral pantomime season.

* It reminds me of a story Daniel Bensaïd, I think, told of a joint LO/LCR festival organised in the 1970s. The LO comrades got up at the crack of dawn and had their tents and stalls installed by lunchtime, at which point the bleary-eyed LCR comrades were found to be only just getting up, smoking spliffs and lolling on the grass, with the result that their equipment was only set up in a panic in the last few moments before the public started arriving…

** The alleged philosopher Luc Ferry has tweeted today that, “with Poutou unkempt in his undershirt, no wonder the workers are turning massively towards Marine Le Pen”