On this day in 1759, pioneering feminist Mary Wollstonecraft was born in Spitalfield's, London.

In this extract from her introduction to Wollstonecraft's groundbreaking work A Vindication of the Rights of Women, historian Sheila Rowbotham charts the radical milieu into which she was born, and the enduring influence of her work. 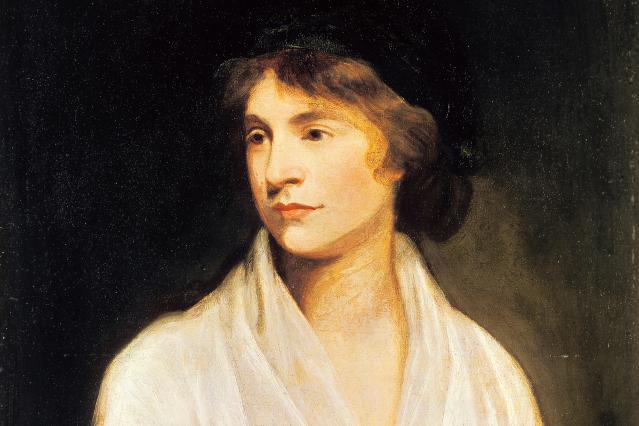 I first came across Mary Wollstonecraft in 1957, one rainy dayon holiday in Torquay. A bored teenager of fourteen, I happened to buy a second-hand copy of Rosalie Glynn Grylls’s William Godwin and his World (1953) and found myself enteringthe intense circles of British Dissenters and radicals who faced accusations of treason on account of their support for the French Revolution. Mary Wollstonecraft was there among them, looking out from John Opie’s portrait, serious, reflective, a little sad. In 1964, when I went, by chance, to live in Hackney, I would think of her walking over to Dalston Lane from the school she ran at Newington Green, musing on rights and liberty. I read the first edition of A Vindication of the Rights of Woman when I was writing Women, Resistance and Revolution (1972) in the British Museum Reading Room and was amazed at the immediacy of her style and the depth of her perception. Since then, like many other feminists I have been delighted, traumatized and puzzled by the character, life and ideas of Mary Wollstonecraft – such an extreme woman living in such extreme times.

Born in 1759, she was imbued with the spirit of the Enlightenment. As a woman of reason and a woman of nature she personified the complex tensions and fissures of the Enlightenment, which had many contrary facets. Balancing on the cusp of the Age of Reason and the first flush of Romanticism, Wollstonecraft struggled to reconcile sense and sensibility in her life and in her writings. She was at once a rather prim educator and a tortured soul seeking fulfillment in defiance of convention. The endearing contradictions of the author of A Vindication of the Rights of Woman were not simply theoretical. Fiercely insistent on women’s autonomy, she discovered passionate sensuous enjoyment with an American, Gilbert Imlay, who she met in France. She bore his child without being married, breaking the hypocritical rules of discretion. And, when he distanced himself from her and their relationship disintegrated, she was nearly destroyed. An idealistic supporter of the French Revolution in 1789, she was nonetheless painfully aware of the gap between external change and inner spiritual transformation. In 1793 she observed as the Terror unfolded: ‘I can look beyond the evils of the moment, and do not expect muddied water to come clear before it has time to stand; yet, even for the moment, it is the most terrific of sights, to see men vicious without warmth.’ Personally and politically she wrestled over principles and experience; a bruised Wollstonecraft would eventually acknowledge that ‘conscious rectitude’ could not ‘calm an injured heart’.

In 1797, it seemed that at last she had found domestic harmony and love, first in a free union and then marriage with the radical philosopher William Godwin. Pregnant that August, the enlightened mother approached the birth of her second child by collecting books and papers to read while awaiting the onset of labour. Her intention was for the mind to govern the body; instead she suffered the terrible pains of puerperal fever after giving birth. The quintessentially female dangers of childbirth finally defeated the woman who had rebelled so profoundly against the constrained destinies of her sex. Her defiant legacy was to be her writings; A Vindication of the Rights of Woman, especially, aroused admiration along with ire. In 1840, the French socialist and feminist Flora Tristan declared it to be ‘une oeuvre imperissable!’ because it linked human happiness with women’s cause. Regarded warily by many nineteenth-century feminists, A Vindication survived as a subversive, semi-underground text which was rediscovered and cherished by radical women in the twentieth century. It has retained its power.