"That’s why they wanted us—for cheap labor." An excerpt from Underground America

When an American church contacted a South African pastor to recruit volunteer missionaries in 2005, a thirty-seven-year-old Xhosa woman named Liso quit her teaching job to join the cause. She entered the US on a four-month “R” visa for religious workers, but her host family in Houston turned out to be more interested in her labor than in her faith and good works. She supports her family back home—a husband, twin twenty-one-year-old daughters, and her HIV-positive mother and sister—on a wage of less than five dollars per hour. Although she buys little for herself besides calling cards, Liso calculates that it will be 2010 before she can afford a flight home. 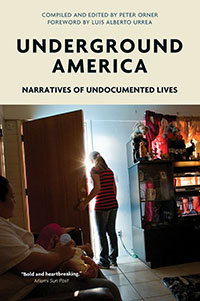 [M]y visa expired and I have overstayed. And I know that it was intentional. They didn’t want us to go because we were working for them. That’s why they wanted us—for cheap labor. If we were legal, we might tell someone how we were treated, we might ask for help or go and work somewhere else. So they kept our papers and held up our extensions because they were afraid that they’d lose us.

Instead of being a missionary, I had some kind of job. But every day the work changed—I never knew what I was supposed to be doing. We were paid three hundred dollars every two weeks, six hundred per month. They said they paid us so little because they fed us and gave us clothes, so we didn’t need any more money. But those clothes they gave us were so big that they didn’t fit me at all. The pastor’s daughter was always eating out and her kids ate meals that you take from the freezer to the microwave. The three of us ladies from Africa used to make rice for ourselves if there was food in the house to cook. Most days, they gave us pork neck bones. As a Christian at home, we don’t eat pork. But in America we were forced to eat pork because we had no alternative. Then for two months, there was no food for us at all, even though the pastor gave his daughter money to feed us. She said, “You eat too much.”

At the church, they served bread and peanut butter after the service every Sunday. When we were so hungry, when we had no food, the lady from Swaziland would go to the school very early in the morning and take some of this bread so we had something to eat. Was she taking the bread or stealing it? I don’t know the answer to that.

The couple I work for [now] pays me four hundred dollars a week. I live here for free and they give me food. It made me laugh the other day when I was working out the numbers on the calculator on my cell phone. It comes to not even three dollars an hour, more like two dollars and some cents. They tell me that they don’t want to pay more because they give me so many things and they let me use the computer. They said they would raise my pay by 7 percent but they haven’t done it.

I’ve seen adverts for a thirty-nine-dollar doctor in the newspaper. That’s the only doctor I can afford. I think I have to go because my whole side is painful and my muscles are swollen. The pharmacist told me she thinks it is arthritis. It’s not easy for me to squeeze wet towels now, or even to open jars.

Out of my $1,600 each month, I send home $1,200. I take off $160 for tithing to my church here and $40 for my calling cards. I don’t spend any money here—it’s all for my family back home. I never go to a movie. I don’t even buy spring water. My family back home are paying off the debts with the money I send. But, like I told you, people believe that in America you can pick up dollars from the grass. Even now, I get text messages on my phone from people at home saying, “Send me money.” Oh Jesus, they don’t know. “Please, please, please send me five thousand rands.” Do they know how much work it takes to make five thousand rands? Do they know what I’m doing? They don’t understand a thing.

The woman from Swaziland left Houston, too. She found work in another city like I did. But she wrote to tell me her situation was bad, the way they were treating her. She did not eat with the family—she even had to use her own cup and plate. After their dinner, she ate leftovers. If they finished all the food, she would go to bed without eating. This girl grew up in Swaziland so she didn’t know anything about apartheid. I told her, “That’s apartheid.” Because she was wearing a uniform with a white headscarf, washing the dogs. I said to her, “It was not your job, that one. It was not the place for you. It was just a small door to get into America.”

Sometimes I cry the whole night. I miss my mother and my daughters so much. And my husband. Ah, my husband. The last time I saw him was January 24, 2006. It’s as if we have given the devil the keys, me and my husband, because we didn’t even stay together all that long and now there is so much distance between us. We don’t know what will happen. Every week, I call him. If I have enough money, I call every day, a very short call. “Hi. I love you,” I say, then I put down the phone. “Hi. I love you.” Until the five-dollar card is used up. “Hi. I love you.” Then on Saturdays, I call him as I walk to Barnes & Noble and we talk for thirty minutes. We talk about our debts and we make plans. I also talk with my daughters about how they are doing at school. I tell them they must respect my husband and listen to him, even though he was not around for a long time. I worry about them. They go to church but they are not born-again Christians.

I want to plant something here. I don’t go around talking about Jesus. I try to lead by example. The children can feel it. I don’t want to leave until I know that I have saved at least one soul here in America. And I have wisdom now. I see how to make money and how to help other people. My eyes are open. Every day in America, I get ideas. I want to learn to swim so I can go home and teach my children to swim. I am taking piano lessons. Someone at my church has promised to teach me to ride a bike. People say, “Is she normal? Why is she doing all those things? Why is she learning piano?” I don’t want to waste a minute of my time here. Every second counts. The year 2010 is coming and that’s when I will have saved enough money to go home. I love my own country—I see now how good it is. But I need these years in the U.S. to make my plans work.