Nothing and Everything: The Zad After Victory

The French government's abandonment of the airport project could leave a bitter taste at the Zad if it leads to the expulsion of those who have made the zone their home as well as their battle.

Zadists gather around a computer awaiting the government's announcement.

In La Rolandière at the zad last Wednesday, occupiers crouched and hovered over a tiny computer screen with only intermittent service, hooked up to a makeshift speaker, awaiting the government announcement on the airport at NDDL. The journalists were waiting too, but in a large cluster outside. When it was clear that the airport project was dead in the water, the celebratory party erupted with a circular dash around the lighthouse platform, then a long trek across much of the zad, to visit and thank farmers like Marcel and Sylvie, those historic residents whose initial refusal to sell their land was at the origin of the fifty-year struggle. “Syl-vie, c’est la vie!" — new songs for the occasion sung in the bright sunlight, mixed with songs and chants that could almost be said to have taken on traditional status in a movement of such long duration.

The party continued well into the night but in the morning there were animals and babies to feed, preparations for the great celebratory reunion of February 10th to get underway, and propositions to be formulated for the General Assembly meeting that night. In the morning it was clearer than ever before that the abandonment of the airport project would leave a bitter taste if it leads to the expulsion of those who have made the zone their home as well as their battle, or, even worse, if it produces an irrevocable split in the interior of the movement. Two equally ominous possibilities or pathways now appeared on the horizon: that of institutional normalization and the re-establishment of public order on the one hand, with its parade of legal maneuverings, its bureaucratic strangleholds, and the progressive annihilation of all the communist inventions developed and shared here over the last several years. And that of a kind of identitarian or sectarian retrenchment on the other, within the walls of a self-defeating anarchist ghetto, with only the old canard that often a defeat is better than a victory to keep you warm: the kind of nihilism that confers an innocence derived from not compromising with a corrupt present, the empty pleasure of retaining ideological purity. 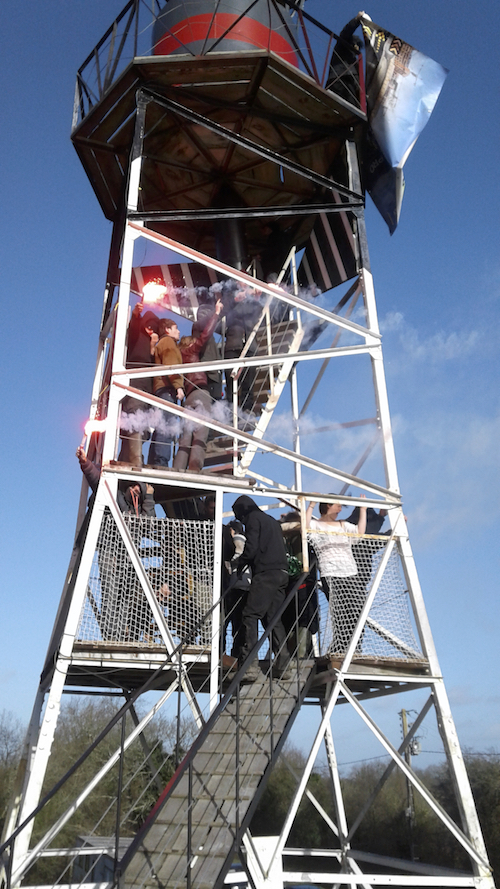 And yet the wealth of tactical inventions that have been the mark of a movement that has thus far soldered together a coalition of highly unlikely protagonists makes it possible to imagine that — once again — a different path, something distinct from these all too familiar and dreary outcomes will be found. No blueprint exists or is needed — all that matters is, as always, the next step. And in the end, nothing matters so much as the political intelligence of the people on site. At the heart of the movement there exists now a basic text — available on the zad website — of 6 points on which to base a collective sense of the future of the zone without the airport. The text makes clear that the movement expects that the central question of the land and its agricultural uses be left entirely in its charge and purview and not be incorporated into institutional management.

If the zad has become an emblem that extends well beyond its territorial reality in a bocage in western France, it’s less because of what it proclaims or formalizes, than because of its lived, working existence as victorious possibility. Victory is not a familiar experience these days for any of us. The exemplary force of the zad is to have found a way to persist in another kind of material and symbolic economy — to make very few demands (other than to be left on their own and on their own terms) but to make choices that matter. By the weekend, the national and international medias had departed, and the zad’s own temporality and rhythm prevailed again. Nothing — and everything — was going on.