Today marks the 31st anniversary of the assassination of Thomas Sankara, leader of the Burkinabè August Revolution which overthrew country’s corrupt military leadership in 1983. In this essay, Amber Murrey reflects on Sankara's legacy, and the ways in which that legacy is remembered via art and music in West Africa.

Today, 15 October 2018, marks the 31st year since Thomas Sankara was assassinated. His premature death at the age of 37 alongside twelve of his comrades signalled the end of what Pan-African activist and scholar Aziz Salmone Fall has called ‘the last revolution in Africa’.[1] Sankara’s politics and legacies remain as formidable and moving as they are contentious and contested.

The Burkinabè August Revolution lasted a mere four years and two months, from August 1983 to October 1987, but the tremendous political, economic and social accomplishments remain unparalleled. Among the realisations were clear advances in health care, gender equality, food self-sufficiency and small-scale agricultural production (with Burkina Faso became a net exporter of food stuffs[2]), reforestation, expansions in public transport, promotion of the arts, refusal of debt, rebukes of neo-imperialism, promotion of fitness and collective practices, and more. That these achievements occurred amidst continuous political and economic sabotages and significant material challenges, only renders the story of Thomas Sankara and the August Revolution even more emboldening for humanist struggles for wellbeing.

Some of these economic successes would be noted after Sankara’s death by those institutions heralding the compulsion for neoliberal economic policies across the African continent, including in Burkina Faso. The World Bank country report for Burkina Faso, for example, reveals the determination of capitalist actors to appropriate critical and anti-capitalist actions as their own triumphs[3]. In the years since his assassination, international environmental movements have gained momentum and some of Sankara’s groundbreaking policies have been adopted by transnational and largely neoliberal organisations. We have witnessed the mainstreaming of his insistence on the importance of gender equality for social wellbeing (or ‘human development’) and the adoption of initiatives in support of grassroots efforts to green and re-tree the Sahel, including the Great Green Wall of the Sahara and the Sahel Initiative, a project colloquially believed to have its genesis in Sankara’s ecological projects.

Much has been written, said, sung, danced and created in honour and in recognition of his life and legacy. This has particularly been the case for those working in French, in which twenty-odd books and countless articles, songs and documentary films are available. English speakers have been less rapid in recognising and considering Sankara’s politics and praxis. On the topic of the ‘disappearance’ of Sankara from Anglophone scholarship, Nicholas A. Jackson wonders, ‘What if critical scholars of development throughout the 1990s and early 2000s had more systematically engaged Sankara’s ideas and experiences?’[4]

In the past decade or so, we have witnessed a discernible re-emergence in engaging with Pan-African and Black political figures like Sankara within the university. When I was completing a Masters degree in Pan-African Studies nine years ago, Sankara was never mentioned or studied in my coursework. While frustrating at the time, this scenario seems less and less imaginable today.

Art and the Popular Memorialisation of Sankara

This October, I spoke alongside Aziz Salmone Fall before a small group gathered at the Africa Centre in London to mark the launch of a multimedia instillation by Pierre-Christophe Gam. The instillation, titled Thomas Sankara – The Upright Man – is part of a wide-ranging and enduring practice of artists and musicians to recognise Sankara’s on-going prominence for contemporary African politics.

During his presidency, Sankara—who was also a guitarist and member of the band, Tout-à-Coup Jazz—worked to foster cultural knowledge and self-pride as an anti-colonial practice. Sankara said, ‘“singers, dancers and musicians” can equally stand with formal representatives of the revolutionary party to “explain… what the revolution should be”’.[5]

The revolutionary government constructed new theatres and artistic centres and supported artists through public festivals and venues—most notably the biennial Festival Panafricain du Cinéma et de la Télévision de Ouagadougou (Panafrican Film and Television Festival of Ouagadougou, or FESPACO) and Semaine Nationale de la Culture (National Cultural Week). At the United Nations in 1984, he said, ‘I speak on behalf of artists… poets, painters, sculptors, musicians and actors… who see their art prostituted by the alchemy of slow-business tricks’. His works reveal his conviction in the power of art to raise public consciousness.

Artistic expressions have remained an integral component in an enduring memorialisation of Sankara. The 2018 documentary film Burkinabè Rising follows the double lives of Burkinabè artists as both artists and revolutionaries.  Art, one person explains in the film, permits ‘the power of speaking from the side of one’s mouth’. Perfecting indirect speech is often an important revolutionary practice in contexts of pervasive political censorship.

After his death, the government of Blaise Comparoé initiated a ‘rectification period’ that withdrew the radical economic and social programmes central to the revolution. Until 1998, references to Sankara were prohibited while publically the government alternately sought to discredit Sankara or to take credit for the successes of the revolution. Artists within and beyond Burkina refused this historical revisionism. References to Sankara are particularly frequent within West African jazz, hip-hop and reggae—from Les Vautours, Smockey, Sam’s Ka Le Jah and Joey le Soldat to Fitt Band Experience, Kinkeliba, Alpha Blondy, Sultan Oshimin, to Skepta and Wizkid’s recent song ‘Energy (Stay Far Away)’.

Serge Bayala, a student at the Universitè de Ouagadougou and founder of the movement Deux Heures Pour Nous, Deux Heures Pour L’Afrique (Two hours for us/Two hours for Africa), recently told me, ‘we use art as a way of resisting and expressing ourselves’. Describing the build-up to the 2014 popular uprising that resulted in the ousting of Comparoré, he explained, ‘we brought people into a place through art, during that creation, we stop with a high level of inspiration and then we say “if you want to continue to dance, you need to organize against Compaoré"… we took that strategy to circulate [ideas] and sensitise people… art [was a way] to encourage people politically and to raise their consciousness as active citizens’.

Pierre-Christophe Gam’s collection draws from interviews with key figures in the August Revolution to capture a popular imaginary of Thomas Sankara and the moment of the revolution. He explained that his unique style of combining Christian iconography and digital imaging on printed fabric draws from personal and collective realities in West and Central Africa. 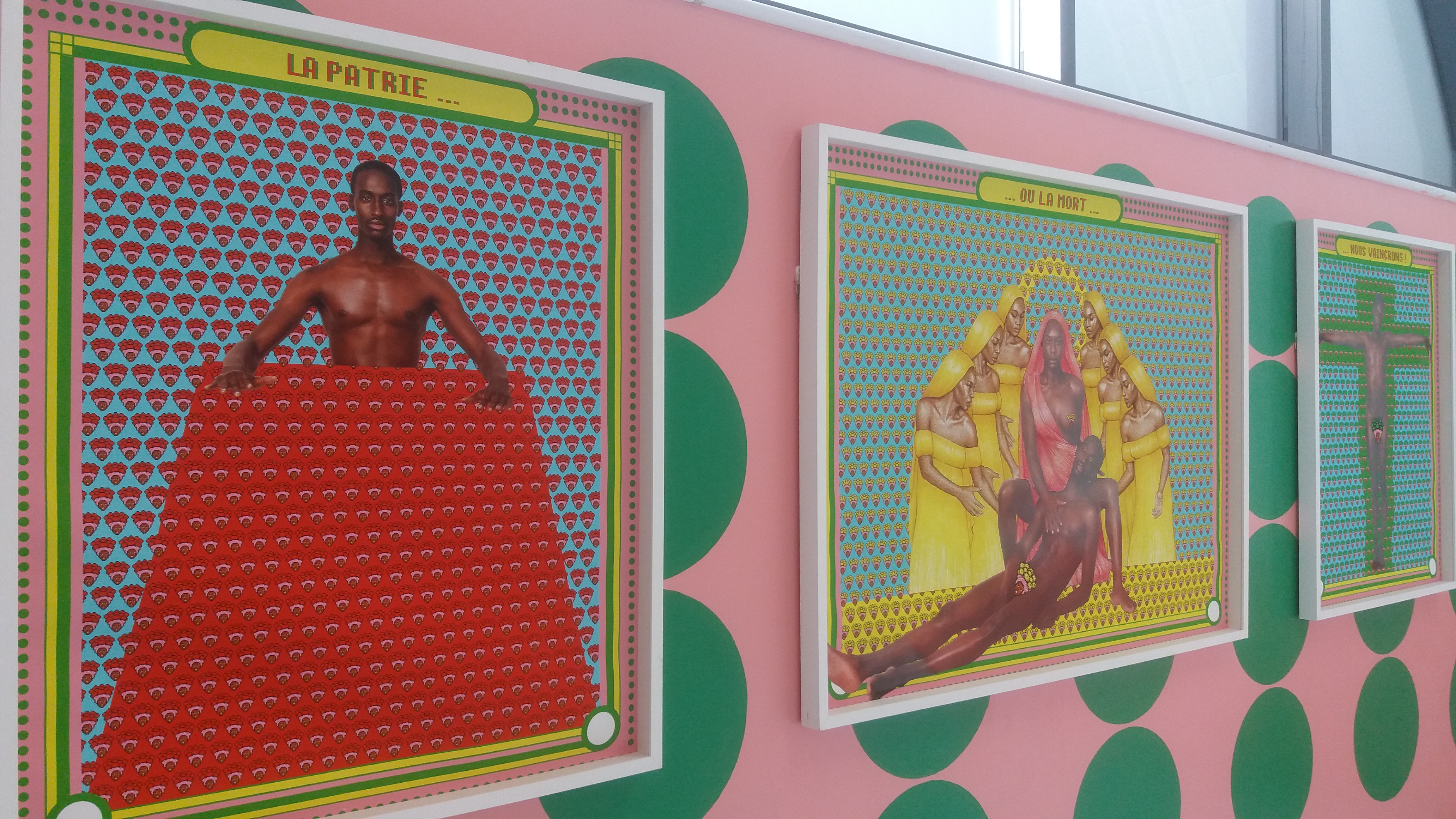 As a young boy in 1987 when Sankara was assassinated, he viewed the world as if through a pixelated lens—this was part of his generational heritage during the rising prominence of video games. His material of choice is the pagne, an untailored wax printed fabric. His art extends the practises of using the pagne to convey political and religious messages and to commemorate the dead. Gam wanted to see if he could use fabric to tell “a more complex story”—the story of Sankara, as seen through the eyes of the people.

Gam uses multimedia to explore the “three layers of explanation” for life in Burkina Faso. He explained these layers as: (1) the political explanation of desire for power and influence, (2) the economic explanation of desire for resource control and exploitation and (3) the esoteric explanation of spiritual and sacrificial reasons. Drawing inspiration from a transformative conversation with Sankara’s former head of security, who argued, ‘Thomas Sankara committed suicide… his own physical security was never a priority’. Drawing from this and other conversations, Gam was inspired to narrate Sankara’s life as seen by ‘the people in the street’: as a ‘prophet—a spiritual incarnation of purpose into flesh’ and ‘as a Christ[-like figure] from the miracle to the treason’. We might add to this timeline the eventual resurrection of Sankara through popular art and iconography.

This popular reading stands against what Sankara expressed during his lifetime. He spoke calmly of the dangers of hagiography and urged the American journalist Ernest Harsch not to write his biography but rather to write a popular history of the revolution. Before the United Nations General Assembly in 1984, he said, ‘I make no claims to lay out any doctrines… I am neither a messiah nor prophet. I possess no truths. My only aspiration is twofold: first, to be able to speak on behalf of my people, the people of Burkina Faso, in simple words, words that are clear and factual. And second, in my own way to speak on behalf of the “great disinherited people of the world”’. In his yearning to create a grassroots resistance consciousness of self-empowerment, Sankara defined the tradition of hero-worship. He discontinued the practice of hanging presidential portraits in public buildings.

Indeed, Sankara stands out for his unwavering commitment to the creation of a popular critical consciousness. In his impassioned speeches and interviews, he elaborated a reflexive understanding of his own role in the human struggle as one to create a society amiable to the cultivation of people’s own self-articulated empowerment. His faith in the ability of people to transform their own lives was without parallel. His successor and the probable orchestrator of his assassination, Blaise Compaoré, when asked to explain ‘democratic centralism’, responded on the other hand, ‘it is the top, the leadership, which decides and the grassroots have to submit’.[6] Comparoré imposed precisely this genre of leadership in Burkina Faso during the 27 years succeeding Sankara’s assassination.

Gam’s work and its promotion in Addis Ababa, London, Johannesburg and elsewhere creates space for public conversations about political leadership and radical politics. During a contemporary moment of visible anti-Black racism—from police brutality to anti-immigration rhetoric—Gam’s art pushes the boundaries between genres in openly political style. Some of the pieces challenge the hegemony of Western iconographical images of the white body as supremely grieve-able by transforming the Madonna with bright African pagnes and a naked, young, black masculine body. Sankara’s life and assassination is captured as a moment of unthinkable and grieve-able violence, one that has otherwise been erased from the official historical record and denied justice by the highest courts.

Collaborating to organise public events to mark Sankara’s life is an activity that remains fraught with logistical difficulties of travel and visas for activists and scholars whose work and lives remain threatened. The silhouette of danger emerges in those moments when excessive documents are demanded before the issuance of visas, when letters of support are invalidated or when friends and colleagues kindly but prudently decline to disclose their accommodation locations and hotel venues in electronic correspondence.

Patricia Daley writes that, ‘In the era of neo-liberal individualism and the free market, it is often seen as outmoded to think in revolutionary ways’[7]—indeed, it is often seen as naïve or cruelly optimistic. Yet, people around the world continue to be motivated by the story of Sankara and the Burkina Faso August Revolution. Events honouring Sankara are being held in Washington D.C., Toronto, Paris, Ouagadougou and elsewhere today to remember and to reflect on the life and legacies of Thomas Sankara.

Amber Murrey is a decolonial political geographer and anti-racist scholar. She is the editor of ‘A Certain Amount of Madness’: The Life, Politics and Legacies of Thomas Sankara (Pluto Press, 2018). She tweets @AmberMurrey.

[1] If we take revolution to be a transformation in a society’s mode of production, as Fall explained to the audience at an event in London on 13 October 2018 reconsidering Sankara’s legacy and the on-going campaign and struggle for justice for Sankara.

[2] The impulse has been to interpret some of these successes apolitically, as little more than ‘good weather’ (see the World Bank’s country report for Burkina Faso from 1989). 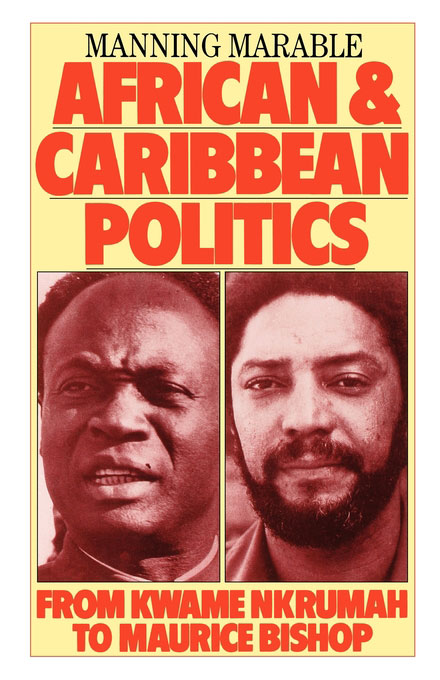