40% off EVERYTHING!
about 1 month left
Ariella Aïsha Azoulay
comments

Imagine Going On Strike Until Our World Is Repaired

Ariella Aïsha Azoulay on striking against the Israeli state and the deportation of people from their home(land).

After eight months of hunger strike, Samer Issawi, a Palestinian detainee in one of the Israeli prisons for Palestinians, dictated to his lawyer a letter addressed to Israelis. Hunger strikes are usually directed against institutions—prisons, states, regimes. In al-Issawi’s letter I hear an additional plea, a call to Israelis to liberate themselves from their own prison, the prison of the jailers, and claim their right to cease being perpetrators:

Israelis, I’m looking for an intellectual […] I want him to stare into my face and observe my coma, to wipe the gunpowder off his pen, and from his mind the sound of bullets, he will then see my features carved deep in his eyes, I’ll see him and he’ll see me, I’ll see him nervous about the questions of the future, and he’ll see me, a ghost that stays with him and doesn’t leave […] I have not heard one of you interfere to stop the loud wail of death […] It’s as if every one of you has turned into gravediggers, and everyone wears his military suit: the judge, the writer, the intellectual, the journalist, the merchant, the academic, and the poet. And I cannot believe that a whole society was turned into guards over my death and my life, or guardians over settlers who chase after my dreams and my trees […] I do not accept to be deported out of my homeland. I do not accept your courts and your arbitrary rule […] Israelis: Listen to my voice, the voice of our time and yours! Liberate yourselves of the excess of greedy power! Do not remain prisoners of military camps and the iron doors that have shut your minds! I am not waiting for a jailer to release me, I’m waiting for you to be released from my memory.[1]

Issawi’s letter is a call to Israelis to recognize that disavowal of the constitutive injustice on which their world is built—on stolen lands, a world whose indigenous people are denied a place, imprisoned, and denied their right to live in freedom, imprisons them as well.

The enduring Israeli state structures and institutions cannot erase memories of the crimes now inscribed in land or of the land lost through dispossession. There are many guardians of these memories and many more invited to awaken to these memories, recognize them as their own, and strike against imperial attempts to present reparations as superfluous or futile or someone else’s business. Though Issawi’s plea dates from 2013, the iron doors that he aspires to open are those that were imposed in 1948 and that split time into “your time” and “ours,” and subsequently justice into “yours” and “ours.”

For the doors to be opened imperial rights should be abolished.

Here is Rachel Levi outside her house in the town of Yavne, Israel, as state agents seal the windows of the house from which they come to evict her. 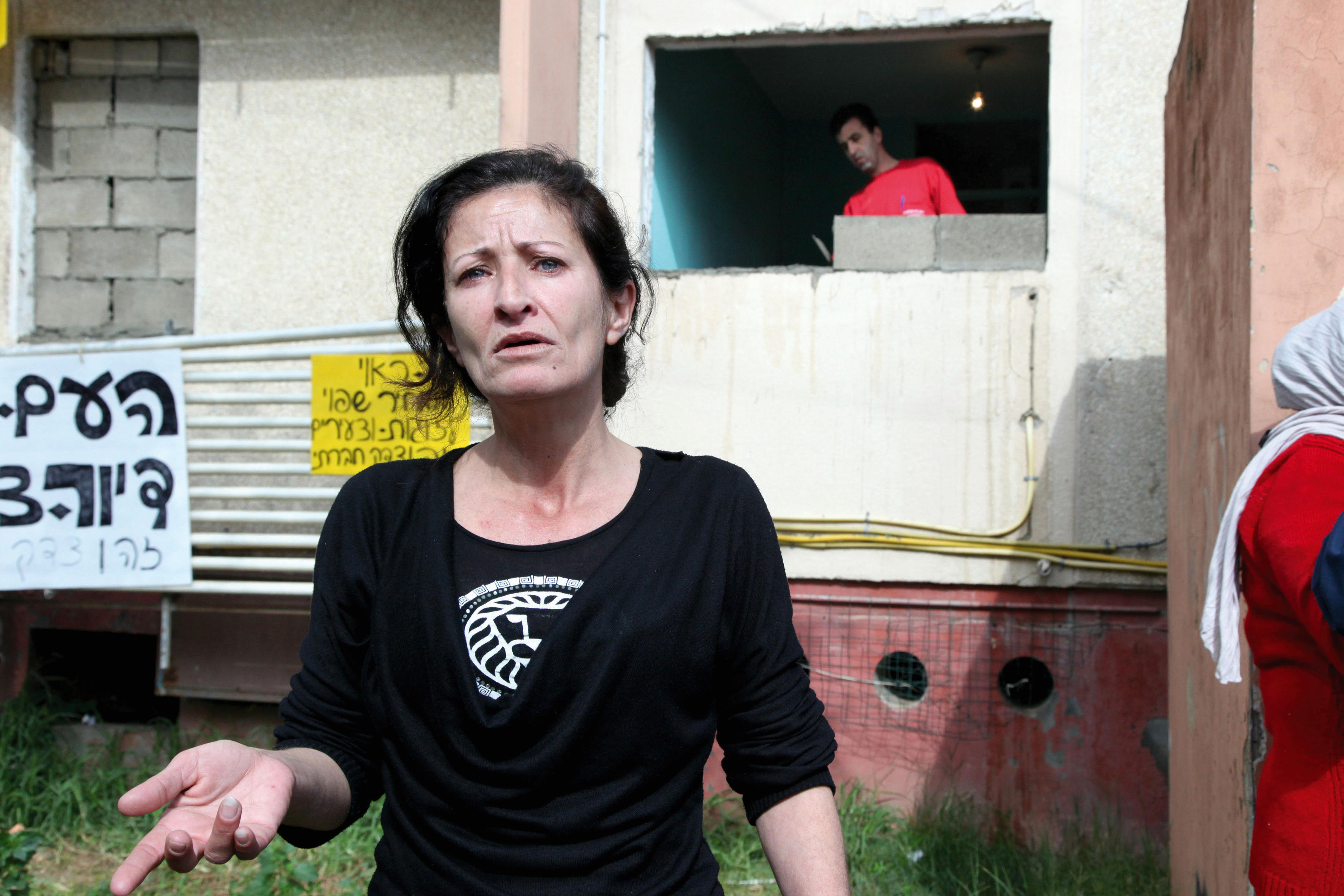 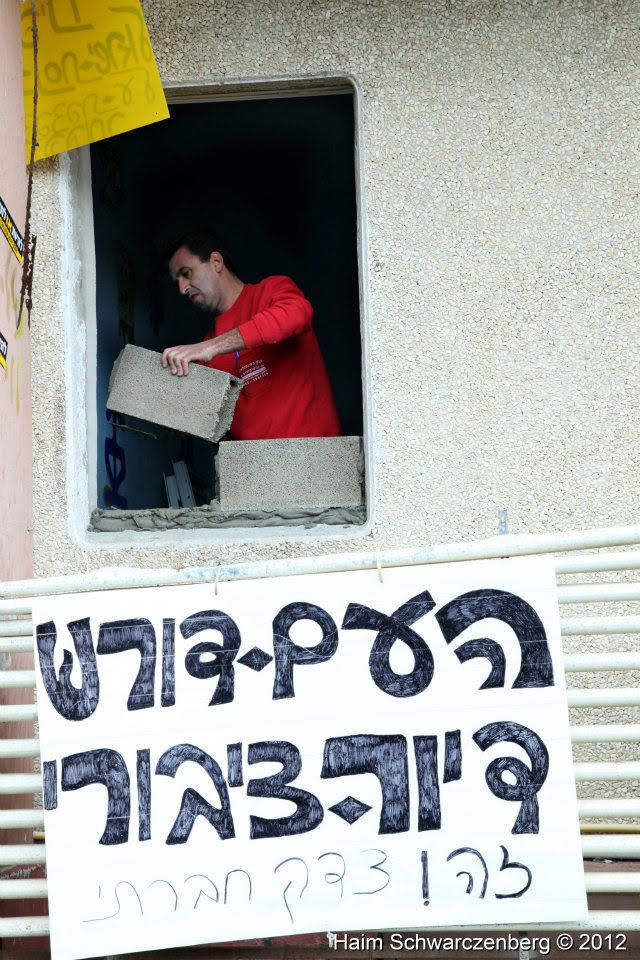 A few decades ago, when Levi was a child, her Jewish family migrated from Morocco. She grew up in this house. When her mother died, she could not inherit her mother’s eligibility for public housing, and the state decided she had to evacuate her home. Seen alone, this photograph could be read as a typical human rights photograph. The victim is at the center, a sole bearer of violation, turning up her right hand as if asking why it is her fate to be thrown out to the street. But when this photo is placed among others taken at the scene of eviction, another reading of the situation becomes possible.

Behind the evicted woman, a state agent pursues his job—sealing her house windows with cement blocks. She is still alone, left to her fate.

In another photo we see three policemen standing at the entrance to make sure the law is enforced and respected.

Outside, a few spectators, relatives or neighbors, watch the situation. A man carries two building blocks in his hands, walking undisturbed among them as if they are simply spectators. Even if they were there only to bear witness, the presence of such a crowd, in a scene full of policemen, is itself a performance of solidarity. These are fellow citizens who had not necessarily known Rachel Levi. They are there to perform together in public their refusal to see Rachel Levi as a disturber of the peace. They are there to make sure that even if the eviction prevails, Levi is not any of the other categories that the police are pushing her to embody: the rioter, the insane woman, the criminal. They are there also to counter the human rights discourse that threatens to single people like her out of the structural injustice behind her dispossession. Outside on the sidewalk, they speak with each other, seek to broaden the circle of people who could share their language.

To understand their language we have to switch to the next photo, to see how they write rights in space, with their bodies, among others.

The woman in the center stands in the way of the man holding the blocks, on his way to seal the house after Levi’s evacuation. Alone, she may be perceived as a close relative or friend of Levi’s, who wants to protect her regardless of the fact that Levi doesn’t have a legal right to stay in this house, which belongs to the state housing authorities. However, even as she seems like the only active protester, she could not proceed if there were not others with whom she can block the eviction, which spares her from being treated as an isolated law-breaker.

But that woman did not remain a single speaker in face of this violence.

She is there with others who insist on speaking a different language, or speaking the language differently, with a syntax that is incommensurable with the violence of the law. In their language the eviction of people from public housing can only make sense as violence. Together, these cocitizens go on strike, claiming that eviction should not be considered law enforcement, since the law itself is the performance of violence. Their bodies repeat, in public, in front of the police, Issawi’s words: “I do not accept your courts, your arbitrary law.” Here is what Rachel Levi said to the social TV camera recording the eviction protest:

I’m tired of this country, do you know how many laws they invented for us, yes for us, just for us, for me, for you, for all the poor. Don’t worry, rich people do not come to the Execution Office, their children do not starve outside. This country cares about a free economy and a strong market, but on whose back?! Do I have the strength to carry the economy of the State of Israel? I’m not moving away from this house.[2]

Without other cocitizens who shared this language, Rachel Levi would either have given up in desperation or internalized an image of herself as a threat to law and order. The series of gestures and statements her fellow citizens use imply that they share the same language, that all of them are already familiar with its inner logic, knowing all too well that this eviction is not an isolated episode, the fate of a single loser in Jewish society, nor can it be separated from the systematic eviction of Palestinians, in 1948, and ever since. It’s the nation-state’s continuing mode of separating people from lands, appropriating their lands and transforming people into transient human labor and human capital.

This continuity between the plight of Issawi (and other Palestinians) and that of Rachel Levi (and other Israeli-Jews made transient by the state) doesn’t erase their differences but it does affirm that the onto-epistemic order out of which both claim their rights are comparably incommensurate with the onto-epistemic regime of the nation-state. Bringing together these moments of strike—which are otherwise separated on an ethnic or racial basis—it becomes clear that the recognition of indigenous rights and the obligation to redress them is the necessary condition for drawing the line of incommensurability between an imperial onto-epistemic order and a worldly one, a line that can be used as a compass to find a way out of the relentless movement of imperialism. 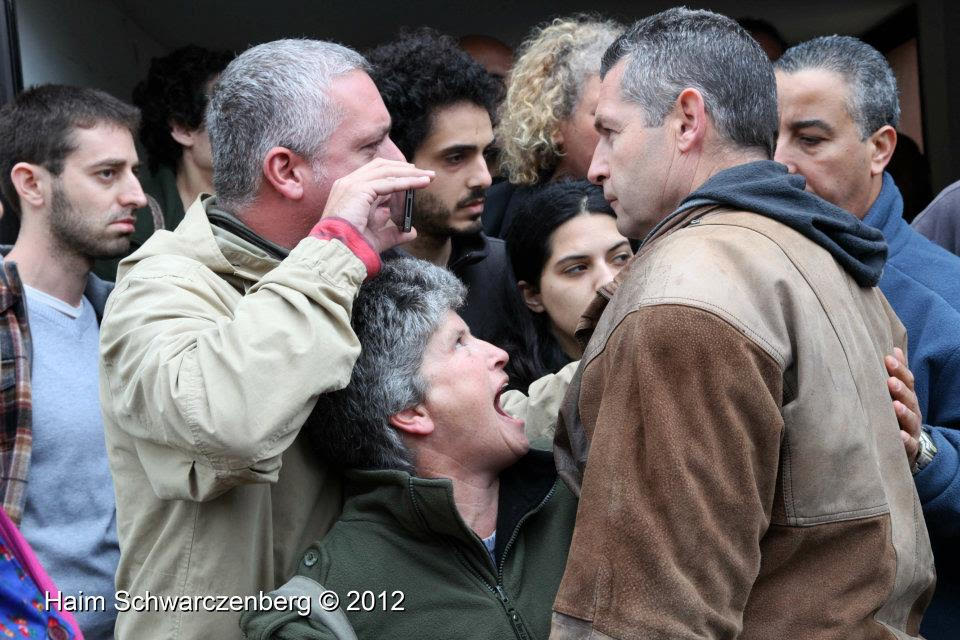 Let’s return to Yavne (formerly Yibna, the destroyed Palestinian village) and listen to the protestors’ language. Their use of language itself is a strike against the onto-epistemic premises of imperialism.

The message about the coming eviction spread quickly from mouth to ear, and through Twitter and Facebook, and many fellow citizens—for whom being evicted means violence regardless of the state’s legal alibi—arrived at the site. They too went on strike, having left their workplaces and daily chores to protest the evacuation. 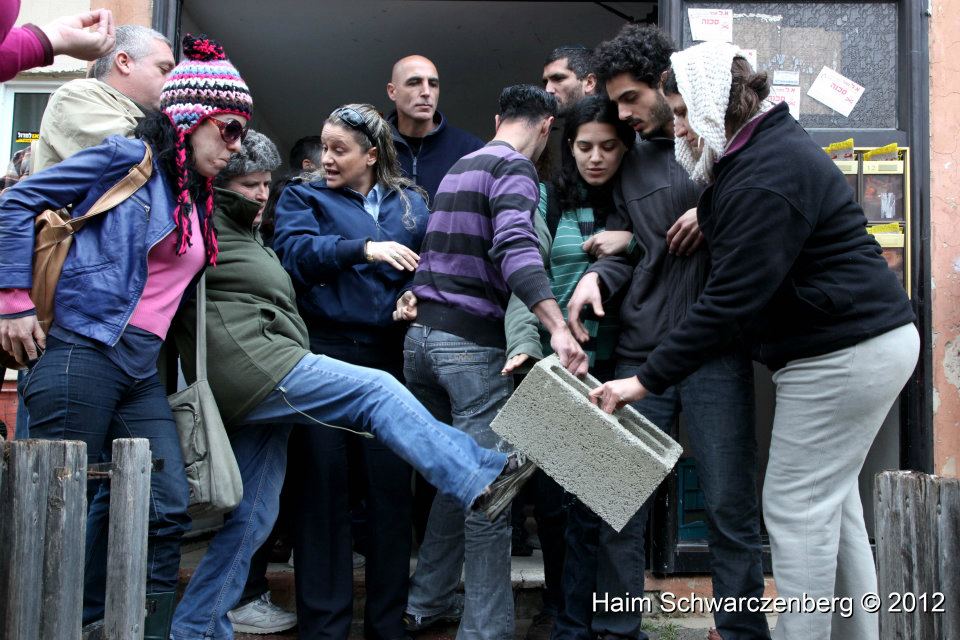 They make it clear that they want to share both their language and their strike with others, law enforcement agents included, in an attempt to halt the eviction.

Here, they interlock and block access to the building. Even after the strikers dispersed, and injustice prevails, the strike is not over.

Imagine a strike against the very creation of one state through the ruination of another. Is it too late? No, justice, reparations, redress of the world can never be too late.

Samer Issawi’s strike, Rachel Levi’s strike, has been going on for decades, for centuries. By refusing to let the strike recede into the past, we join them. Going on an onto-epistemic general strike is an opportunity to catch up with the ongoing strike, until defeat becomes impossible to imagine and our world is reclaimed.