The Hot City series on New York's compound crises goes inside, with Alicia Grullón's self-portraits of essential work at home

Hot City is a series of short reflections on the state of social movements in NYC, from the long hot summer of 2020 to the coming storm season and beyond. You can read the introduction here, a map of New York City's climate plans here, and the descent of compound crises into New York's most vulnerable neighborhoods here.

Cultural identities come from somewhere, have histories. But, like everything which is historical, they undergo constant transformation.

The name ‘other’ is never to be found merely over there and outside of oneself, for it is always over here, between Us, within Our discourse that the ‘other’ becomes a nameable reality. 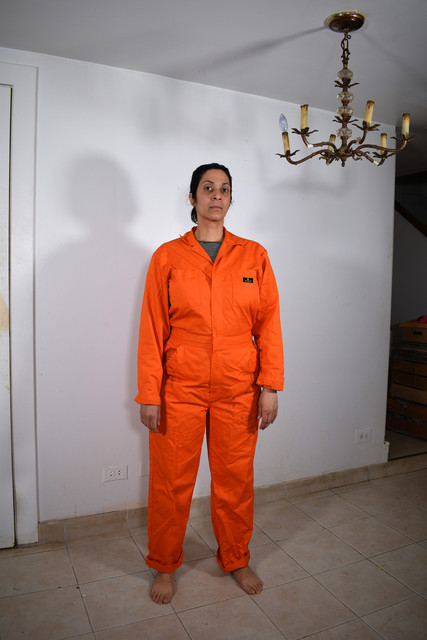 The first two months of the pandemic were filled with the sound of ambulance sirens 24 hours a day, seven days a week. At the beginning, I attempted to keep count of each siren I heard. But it simply got to be too many at a time and I did not want to normalize any of it because the overall handling of the crisis had been abysmal. Another week in, I stopped looking at the time. COVID broke what was familiar to me. Who I felt close to fractured from anything recognizable for some time to come. Aside from immediate family living with me, the only other human beings I would see were essential workers. I began to measure time based on my interactions with them. Morning meant receiving the mail from the postal person. Afternoon came to mean seeing construction workers from outside my window warily walk off scaffolding. I could tell from a distance they were sick. Every step was extra cautious. If we were out of food it meant a week had passed. I’d see the cashiers at the supermarket scared shitless. We’d look at each other not knowing anymore how to say hello or “how are you?” 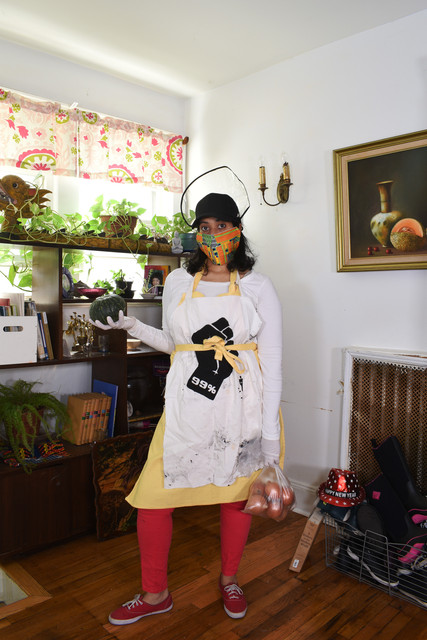 From March to June: At Home with Essential Workers started in my home in the Bronx at the beginning of the Covid-19 quarantine. Each self-portrait is taken in the home I grew up in, the house acting as setting and documentary location. Traditionally regulated as a woman's space, I reveal parts of my home occasionally bare or in flux with elements both accidental and intentional. There are moments I wish my home was up to date. The costumes and props are mash ups of found household objects and others specifically purchased for the character. Many of my postures are culminated choices embodying memories and gestures linked to people from my life. The titles consist of the dates on which each self-portrait was taken followed by links to different online news articles inspiring each performance. Articles span from the treatment of incarcerated people to the impact of COVID-19 on the lives of essential workers. The selection currently up at The Bronx Museum of the Arts concludes with a portrait taken on the day of the FTP4 protests in the Bronx following the murder of George Floyd. The protests arrived at an inflection point when the city was about to burst. It was the time on the clock everyone was anticipating. Violent and merciless, it broke the city’s 8 pm curfew at a cost of over 700 injured by police violence. 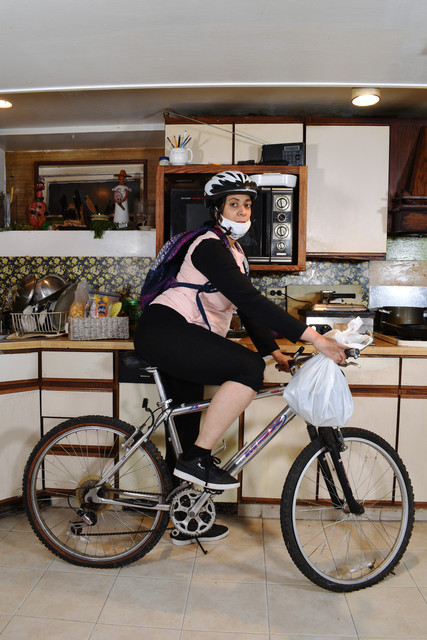 I am a woman of Afro-Tanio Caribbean descent born and raised on Lenni Lenape land and as a performance artist, I put my body in situations that have historically not been meant for me or designed so I have little control over how I am represented in them. By which I mean my body as a signifier. The background of my work is situated within the history of photography, particularly the practice of ethnography - the categorizing of people, plants, and animals through observation. I ask audiences to begin understanding my work from within this aspect of photography’s history, especially as a tool of colonialism. It’s from looking at photographic images in this way that I wonder how I read as I walk into a room when the signification of my body will vary based on who is doing the looking within the context of the het cis colonial patriarchal gaze. These spaces have included: climate change, feminism, the United Nations, real estate, and U.S. history. In my work I want to encourage viewers to reflect upon my performances as particular processes where I express the undoing of colonial history through my body and actions. In a broader sense, I use photography to unravel the complexities of my signification in a straightforward manner relying only on the camera and performance as apparatus. 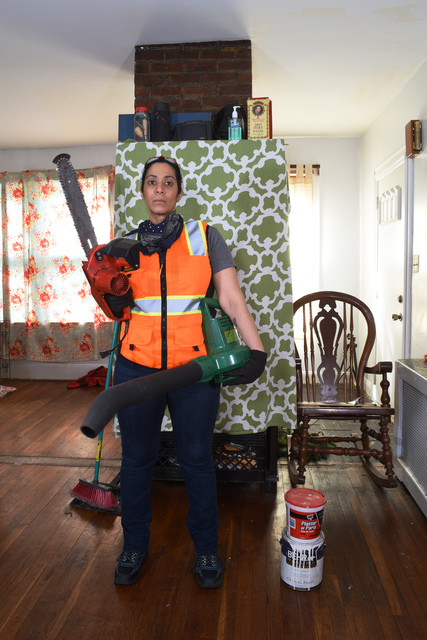 With the overwhelming amount of lives being taken by COVID in the U.S. being African American, Latinx and Indigenous, I have found it ironic that these are the same essential workers whose bodies have been considered better off dead. As days and months go by, I realize it isn't the people who are essential, it is the work to keep the middle class believing in an American dream long dead and making the affluent billions of dollars. It’s as if the dominant culture imagines IBPOC people to float like cut out figures without a background existing only within the context of the job without families, feelings, or a home. Essential workers are merely a service. And intertwined in class issues is always race. As Saidiya Hartman writes, the real purpose of the essential worker, already at the bottom of the “racial capitalist order”, is that the worker is only meant “to nurture and support the psychic life of whiteness: that shores up the inviolability, security, happiness, and sovereignty of that master subject,” aka what is considered human. Perhaps what people, overwhelmingly working class IBPOC, in the city want is the indefinite cancellation of rent, living wages, completely free healthcare and access to life-saving food. Only in America can people be made into martyrs by the dehumanization of their existence in order to validate the persistence of the economy. 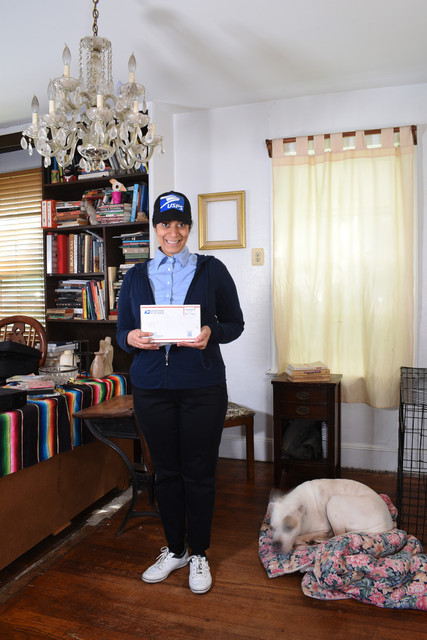 In making From March to June: At Home with Essential Workers the challenge I found as an artist was how to highlight what was absent and whose story it was in the portraits. While listening to news and looking at photographs in articles, I asked myself if these images were about essential workers. Was it possible, through my embodiment, within my memories at home, to humanize the regard of people where I myself was also a sign like them? As I spend more time with the work, I think that the series has become a personalized piece of oral history where the spectator learns more about themselves than about the photographer or subject. 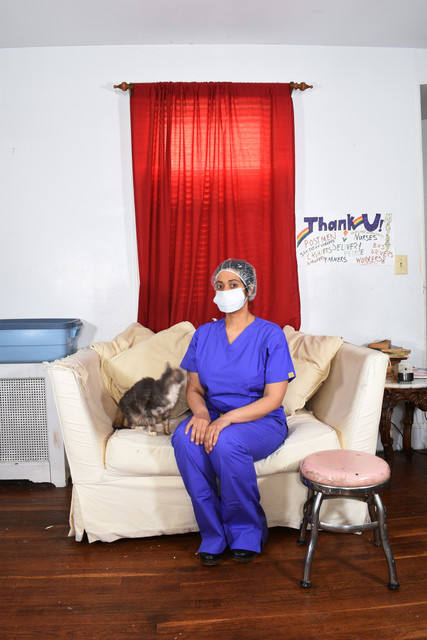 From March to June: At Home with Essential Workers will culminate in March 2021. 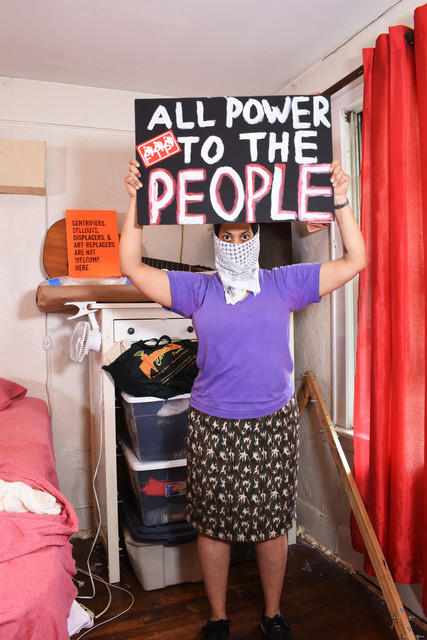