This is What Energy Transition Looks Like: L’Amassada Eviction One Year Later

On 8 October 2019, riot police and other armed security forces violently evicted what had come to be known as L’Amassada, a ZAD (Zone-to-Defend) occupation in Saint-Victor-et-Melvieu in southern France. The following, written a year after the eviction, outlines the goals, structure, and accomplishments of the occupation as well as the political and environmental context of ongoing ZAD struggles against the economic and ecological destruction required by “green” development.

Solidarity with L’Amassada. Nothing will stop us, the struggle continues. Source: Benoît Sanchez

The Reality of Energy Transition

October 8th marks the first anniversary of the L’Amassada Eviction. Associated with the ZAD (Zone-to Defend) constellation in France, the L’Amassada struggle deserves greater recognition, not only because it is one year since its eviction by two-hundred riot police, fifteen police vans, two armored transport vehicles and two excavators (see figure 1), but because L’Amassada paid the price for directly confronting the green economy. L’Amassada targeted “energy transition” and “renewable energy,” and in the process the occupation revealed the economic intentions, social alterations and ecological degradation created by “green” development. Despite eviction and destruction, the struggle continues to remind us of the reality of energy infrastructure, exposing the “green camouflage” of capital accumulation and their rippling socio-ecological effects. 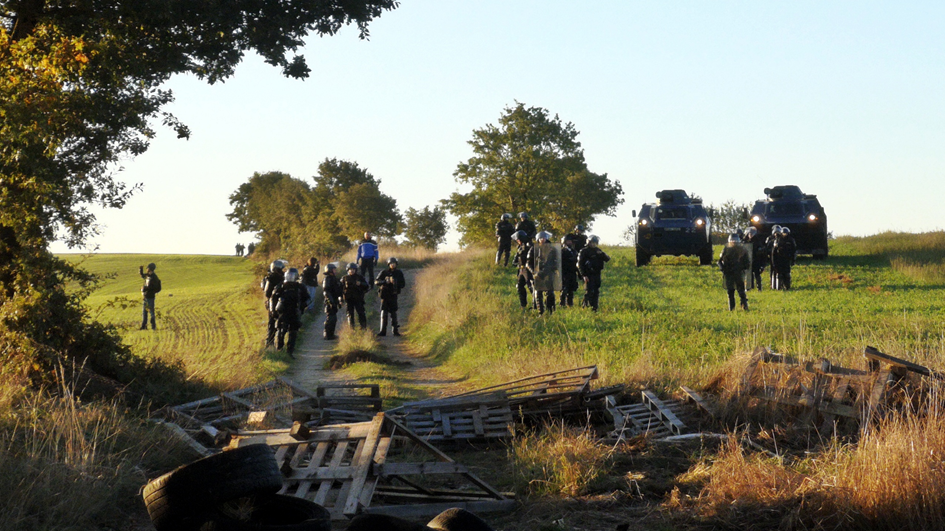 The following revisits the struggle one year later, reviewing its origins and message. We can now see more clearly what L’Amassada was fighting (see Figure 2), which is but one-site—the operational point—of the transformers supply chain. As L’Amassada’s documentary, Pas res nos arresta/Nothing Will Stop Us, reminds us, this transformer is enmeshed in an entire economic system built on conventional extractive activities. 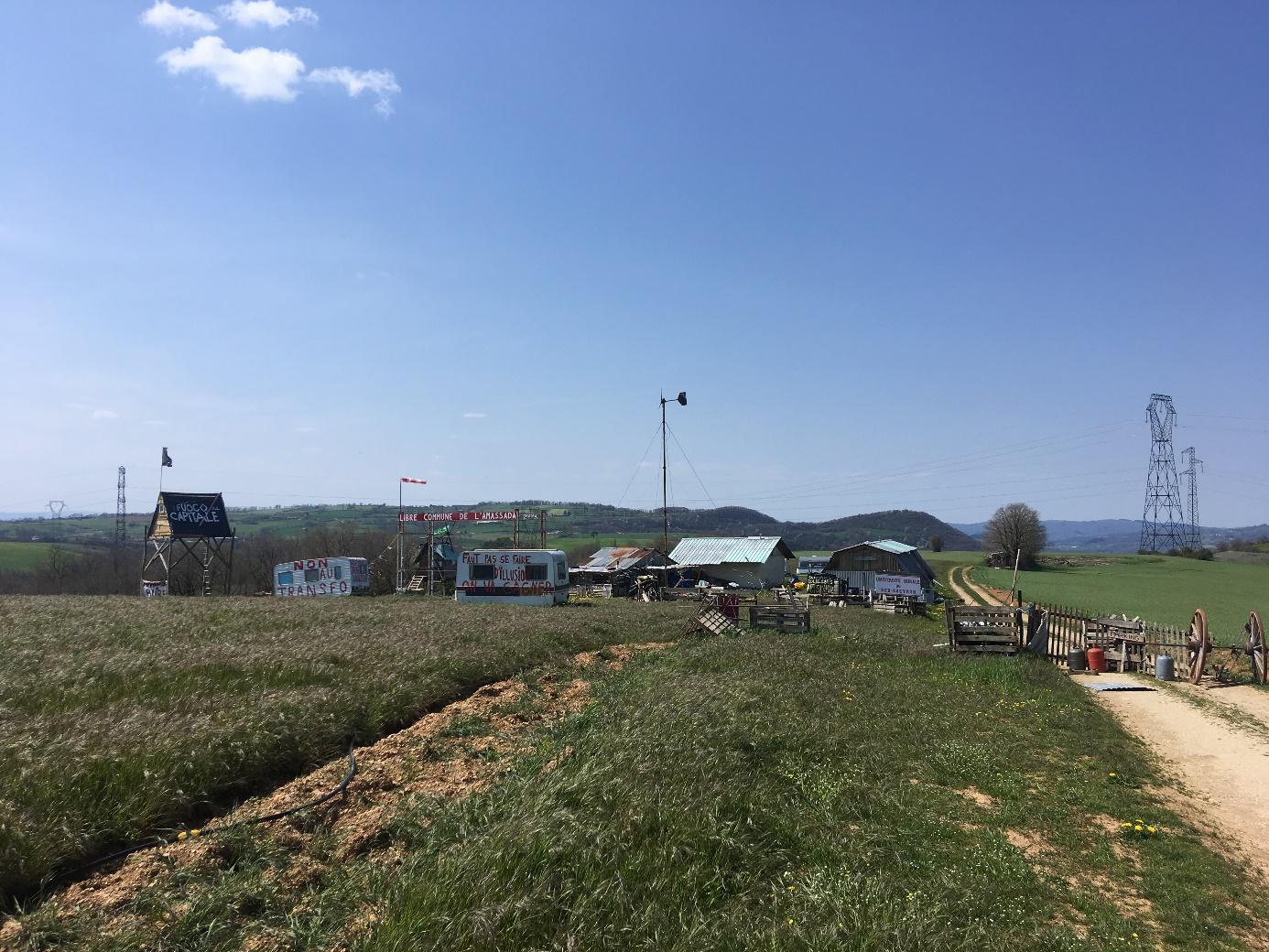 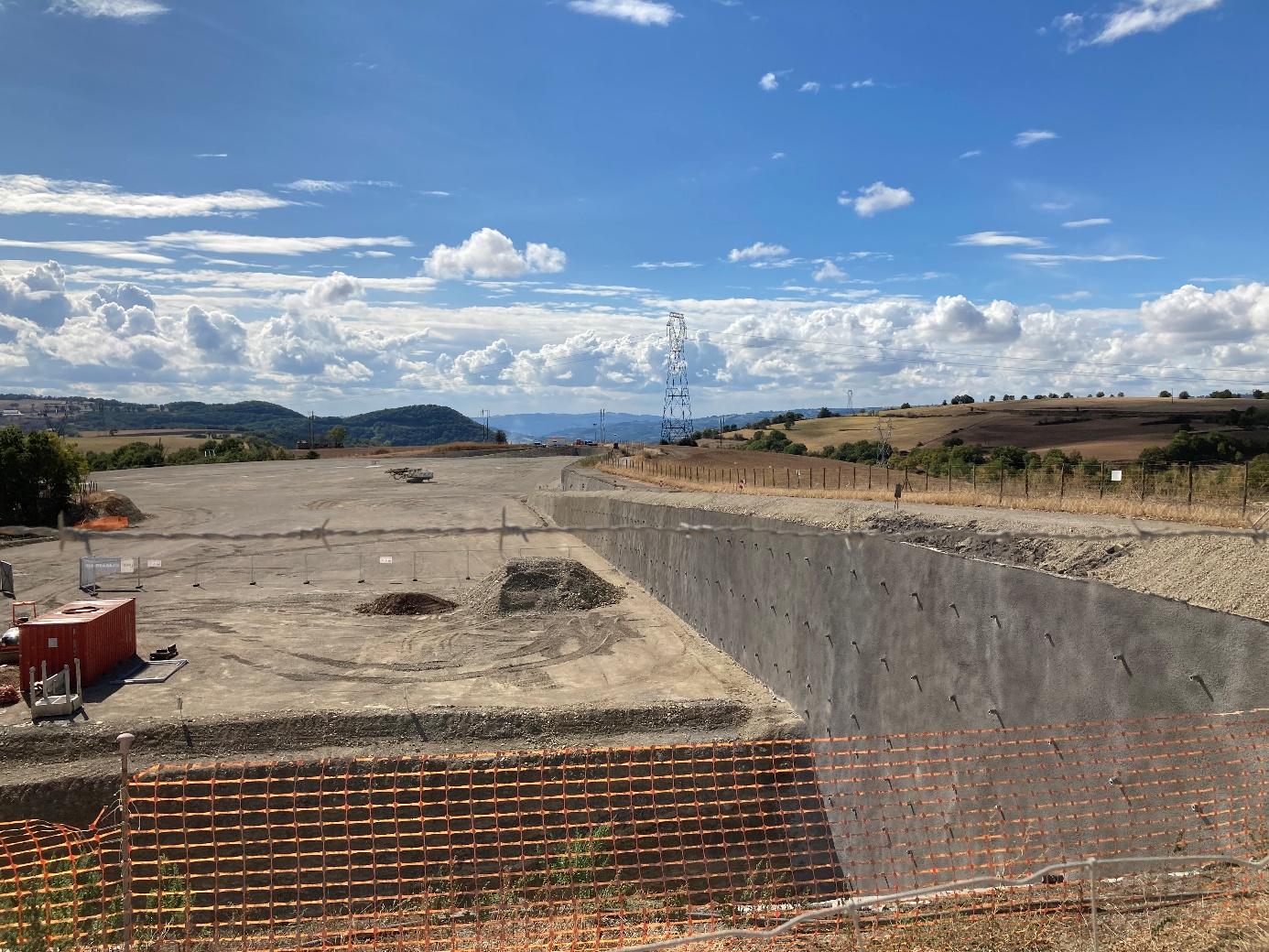 Located in southern France, L’Amassada was positioned on the outskirts of Saint-Victor-et-Melvieu, within visual range of the Millau bridge. The objective was to stop the construction of an energy transformer substation. Activists identified the Réseau de Transport d'Électricité/Electricity Transmission Network (RTE) transformer as a central leverage point that would further spread wind, solar and biomass energy projects across the Aveyron region. The region is already largely energy self-sufficient, with dams along the Tarn River, yet it has become a desirable location for wind and solar development, with 246 wind turbines built by 2006 and many more under construction and planned.

Melvieu already had an energy transformer with a 400,000-volt power line. The new transformer would double the powerline voltage and increase the local capacity for wind, solar and hydrological projects. This also entails increasing the energy “reception capacity” in the region, which suggests that the transformer would serve as a node within an energy corridor. The transformer, then, potentially connects L’Amassada to other struggles along the 400,000 volt southeastern power line, such as fights against wind energy projects in southern counties, conflicts against high-tension power lines (MAT) and other energy projects in Catalonia. These struggles could extend to solar and wind projects in North Africa, making the transformer an accomplice in Project Desertec, or its informal assembly, which sought to harness the solar, wind and hydrological resources of North Africa to meet European Union renewable energy goals.

L’Amassada was a reaction to what many locals perceived as an irregular land deal amidst the failure of legal struggles against the project that began in 2010. The occupation began as a protest site in response to the previous mayor of Saint-Victor-et-Melvieu Daniel Frayssinhes’s signing of a contract with RTE in violation, according to local residents and city council members at the time, of local procedures. The contract organized the expropriation of the Vernhet family and others’ farmland to build the transformer and corresponding access roads. Frayssinhes’s actions spurred a legal struggle and local organizing that led to the formation of L’Amassada, which at the time of construction was not illegal—as it was on private land—even if police harassment became endemic to the landowners and L’Amassada visitors.

The construction of L’Amassada began in the wet, cold and windy December of 2014, with the completion of the first common house in January 2015 (see figure 3). The Free Commune of L’Amassada was born, establishing a protest site (Presidio) in place of the transformer. In Occitanie, the original language of the region, L’Amassada means “the assembly,” as its construction became a point of organization against the transformer. 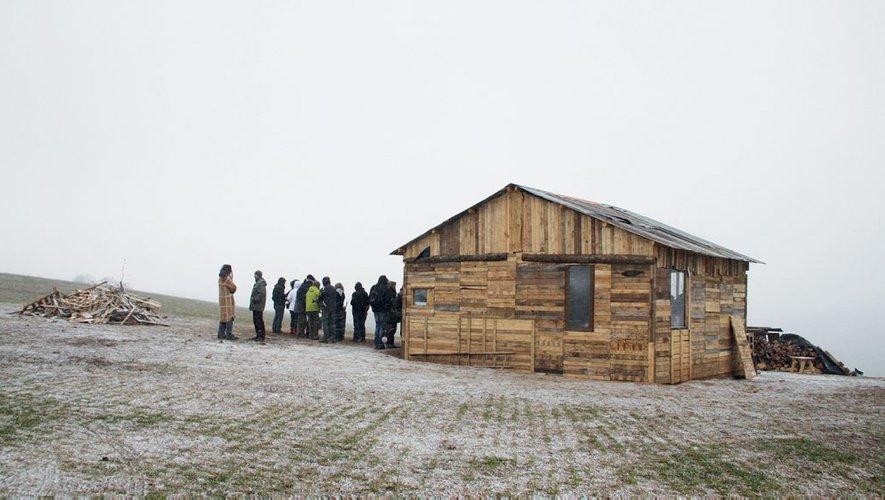 L’Amassada would grow and transform over the years. Beginning with a timber framed pallet house in 2015, L’Amassada would expand with a timber frame dormitory, compost toilets, a micro-scale wind turbine for energy self-sufficiency, a small barn for events, gardens, greenhouses and a water reclamation system to begin a process of ecological self-sufficiency and resistance (see figure 4). 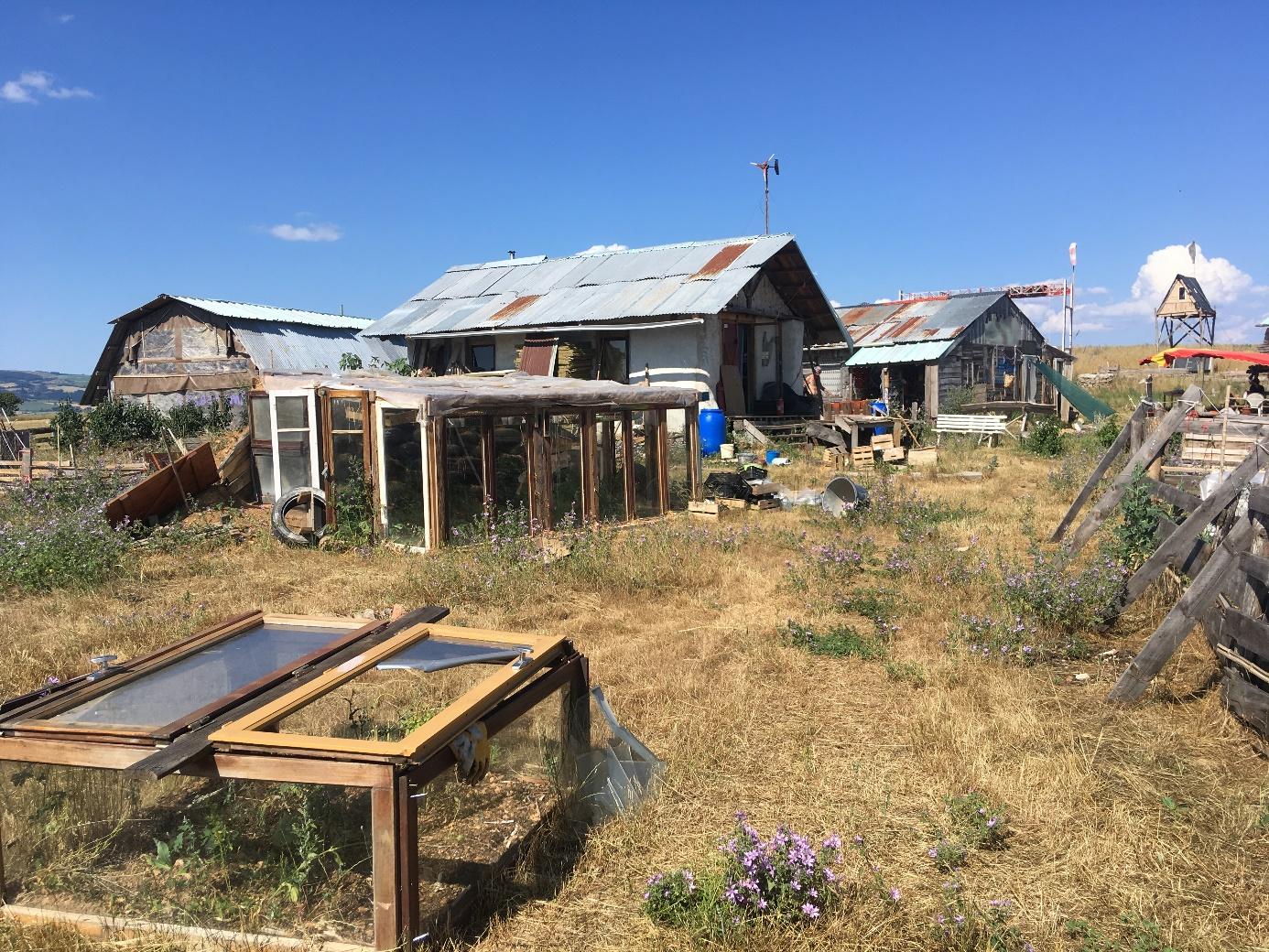 L’Amassada was part of the ZAD constellation. Initially indicating a deferred development area (zone d'aménagement différé), ZAD was appropriated by activists to mean Zone-to-Defend (zone à défendre). ZADs are a method of living in permanent conflict against proposed or active mega-projects that threaten to pave a socially and ecologically destructive development trajectory. ZADs seek to create socio-ecological transformation, not only in committed opposition to habitat destroying development projects, but also enacting new social relationships around non-alienated, self-organized life. Ecological struggle becomes vital, lived and embodied, as opposed to objectified, symbolic and at a distance. People strive to refuse eviction and live in place of the megaproject, articulating anti-capitalist lifeways and developing autonomous capabilities: food, energy and self-defense. Inspired by struggles of Indigenous autonomy such as the Zapatistas, the ZAD concept developed in the Notre-Dame-des-Landes struggle against a mega airport project. The ZAD concept, since then, has spread across France, with Le Monde claiming in 2015 that there were 27.

L’Amassada was a protest site until June 13, 2018. Through the Public Utility Declaration (DUP) and, later, it’s inquiry process into the expropriation of Vernhet family’s farmland, L’Amassada would be legitimized. DUP and the inquiry procedure formed a process of bureaucratic land grabbing, which eventually transformed L’Amassada—in the eyes of the state—into an “illegal occupation” and ZAD. Categorically, and through solidarity networks, L’Amassada is technically a ZAD, yet L’Amassada—contrary to the scare tactics of French media and portrayals of the “Zadiste”— was a community made of various political tensions, positions and overall unique features, notably its celebration and use of cats as emblems of resistance (see Figure 5). “I’d rather see this from a human perspective and therefore I’ll call it a community” explains “Black Cat,” speaking to media tactics seeking to demonize and isolate people defending the land. “But of course, it’s a community based on resisting all the crap capitalism has brought to us in this region.”

L’Amassada experienced intense repression, including repeated police intimidation and harassment, interrogation of landowners, police raids, lawsuits and helicopter surveillance. Indeed, the level of repression against L’Amassada and the surrounding community of St. Victor has been extreme. This culminated with the arrival of two armored transport tanks and two-hundred riot police to enact the eviction on 8 October 2019. The fight against the eviction was intense. Barricades were set on fire, rocks and fireworks were used to repel the police, and people sat on the roofs to prevent the heavy machinery from destroying the structures. Nevertheless, the common house, barn and greenhouses were destroyed and the land leveled and fenced in with razor wire, enclosed and guarded by police and security personnel to prevent land reclamation actions. On 12 October and 1-3 November there were attempts at taking back the land, while on 5 December—in coordination with a general strike—further construction was blocked (Figure 6). This was followed by protests at RTE offices in Toulouse on 18 January 2020 (watch a video of eviction & action here) while sabotage actions against wind turbines and energy infrastructure were taking place across France. Now, one year later, we can see the ecological disruption and change brought by the new Saint-Victor transformer. 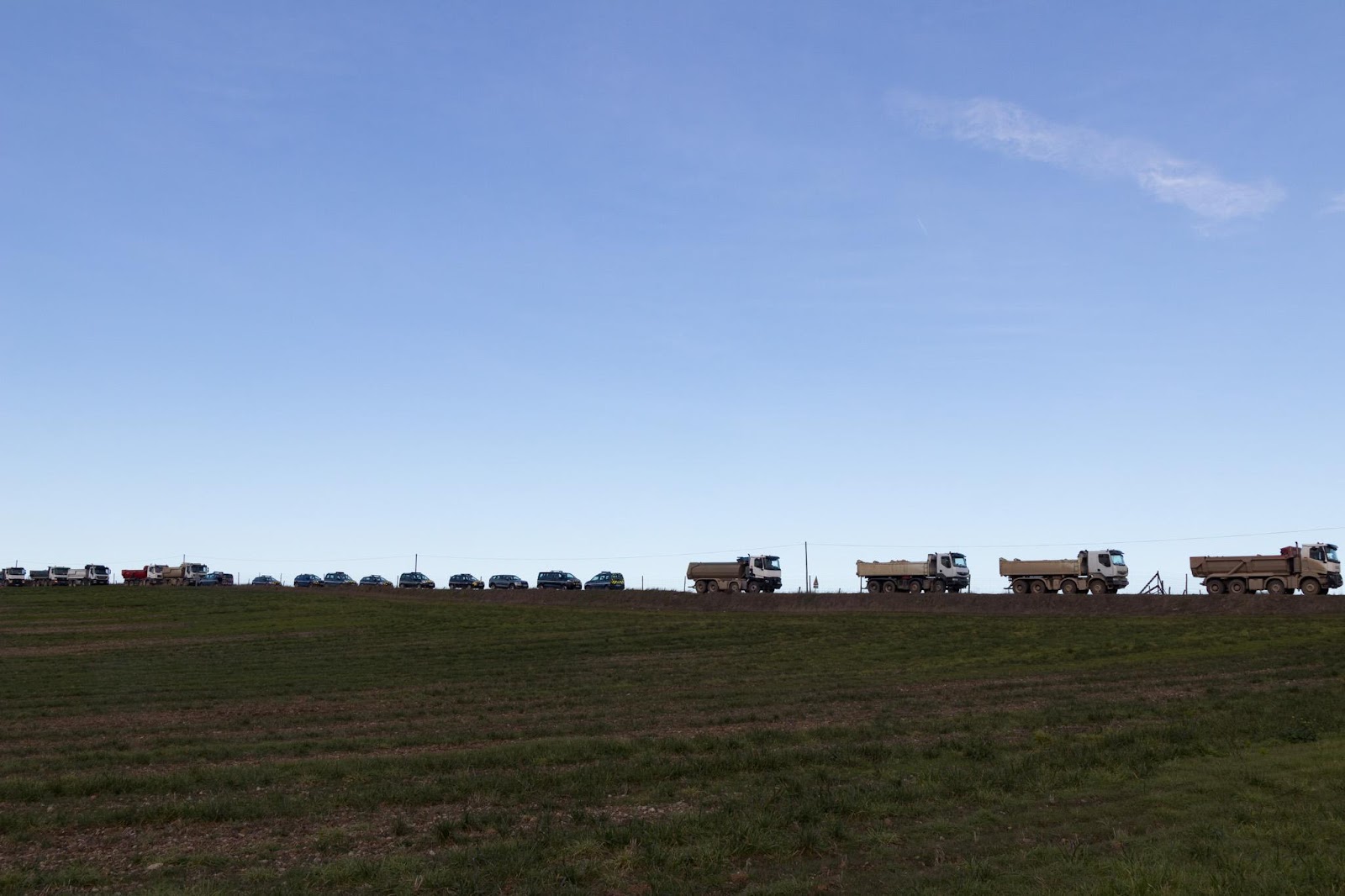 Figure 6. Dump trucks and backed up while police try to clear the roads. Source: L’Amassada

This protest was important because of the sheer level of ecological intervention required for the transformer. A giant square must be cut into the hillside between 9-15 meters deep, stretching the size of a small airfield, with an enormous retaining wall at the other end (see Figures 7 & 8). The transformer, and other linkages with Spain, Ireland and Italy, are justified in the name of expanding renewable energy capacity and creating energy solidarity within the region and between EU member countries. Moreover, as discussed elsewhere, the “local” here means the Occitanie region that includes countless cities, among them Toulouse and Montpellier.

The L’Amassada struggle highlights a number of issues. The main one is simple: energy transition and renewable energy is not “green” or environmentally sustainable. It is energy infrastructure, requiring hydrocarbons-fueled mineral extraction, processing plants, manufacturing facilities and transportation. The ideal is to rewire these industries to run on hydrological, solar, wind and other so-called “clean” energy sources, but this fails to take into account the sheer socio-ecological costs of these energy infrastructure systems. There is nothing “green” about steel, aluminum, copper and rare earth mineral components that are essential to energy infrastructure, digitalization and so-called “smart” technologies. These technologies intertwine and necessitate fossil fuel. That is why, as I’ve argued elsewhere, wind and solar infrastructures are better described as fossil fuel+ systems. As Michael Truscello has put it, there is an entire “necropoltical assemblage” related to the production of this transformer, not to mention a security regime of police and private security personnel that guard the mines necessary for the transformer’s production and geographical placement at Saint-Victor, the latter to prevent “pirate cats” from entering and pissing on everything.