The Verso Book of Feminism: a letter from the Editor

"What was feminism, and how were we to recognize it, across all eras and all regions of the globe?" – Jessie Kindig, Verso Editor, looks back at the publication of The Verso Book of Feminism.

Detail of women warriors from a woodblock print series depicting the Satsuma Rebellion of disaffected samurai, including the female Onna-bugeisha, against Meiji rule, by Tsukioka Yoshitoshi, 1877

When Verso’s editorial board decided to commission The Verso Book of Feminism from its editors and I took on the task along with a team of feminist colleagues, we immediately came up against the most basic—and the most expansive—of questions: what was feminism, and how were we to recognize it, across all eras and all regions of the globe? If we were now charged with bringing together 500 feminist voices from throughout recorded history, we needed some kind of working definition. What I found was that the answer came, for me, in the editing process itself.

First: my co-editors and I started from the assumption that feminism was not just the purview of women, or one gender or sexuality; we knew it was global; we knew our feminism was defined by those most marginalized by race and class and capital and religion; we knew it wasn’t just speeches about rights, but also about opposing apartheid and colonialism, about private grief and collective joy. But feminism, we knew, even though it could belong to everyone, was also specific in what it held, a specificity that had to do with how gender and sex constrict bodies. So with these abstractions, we went to the archive. We’d know it, we thought, when we saw it.

For the good part of a year, I spent at least one day a week in the academic library of my alma mater, Barnard College, the women’s college at Columbia University, going through books recommended by historians, activists, librarians, colleagues, citations in secondary sources. My team of editors helped me look through the stacks of books that I brought back from the library (bags and bags of books on the subway, from uptown Manhattan to Brooklyn!).

I also spent time talking with generous scholars, activists, friends, librarians, and many of Verso’s authors. The historians especially would ask what I meant by “feminism,” given that the word didn’t emerge in the historical record until the early 1900s. Sometimes I would just ask them what they thought it meant. Here was the first insight: everyone approved of the project but no one had a clear answer, and so: asking what feminism was allowed us to imagine what it might become.

Second: It turns out the personal really is political. At night, I found myself going home and working from my own library, and so you’ll find some idiosyncratic choices in the book that are simply pieces I have long loved and thought with: indigenous stories of animal mothers from the Americas; Shakespeare’s “dark lady” sonnets; Harriet Jacobs’s struggle out of the most confined places in the American slave system; Henry James’s novel The Portrait of a Lady and Zora Neale Hurston’s Their Eyes Were Watching God; Louise Bourgeois’s artwork; ACT UP’s Queer Nation manifesto with its still-thrilling call: “AN ARMY OF LOVERS CANNOT LOSE!”

The joyful surprises were things I didn’t know, unfolding worlds that the narrowed English-language gaze never sees. And here is the third insight: feminism is finding new ways that, to quote Sara Ahmed, “women can be in relation to each other.”

Take, for example, the 1870s: we have the revolutionary petroleuses of the Paris Commune, threatening to burn down the bourgeois order; and we have the four “Queens of the Fireburn,” black women laborers in the Dutch West Indies who led the labor protest that burned down the jails and banks of former slaveowning colonials. What we have here are two kinds of revolutionary fire, taking place at the same time, separated by oceans, languages, and cultures with no apparent connection to each other. And yet: together these women transformed the world and haunted kings, bankers, slave owners, and bourgeois republics who did not admit black people nor women as citizens.

Or take the 1910s, perhaps one of the richest decades for women’s collective action: the Japanese feminist literary journal Seito (“Bluestocking”) is founded and advances a new theory of politicized, literary modernism; 600 black women march through Bloemfontein, South Africa, “to proclaim their womanhood” under a racial regime that refused to grant them dignity; women’s protests against hunger on International Women’s Day provide the spark that sets off the Russian Revolution.

Since the book’s entries are ordered chronologically, you can see these connections in ways I had not done before; you can see how in many ways, feminism made the world. 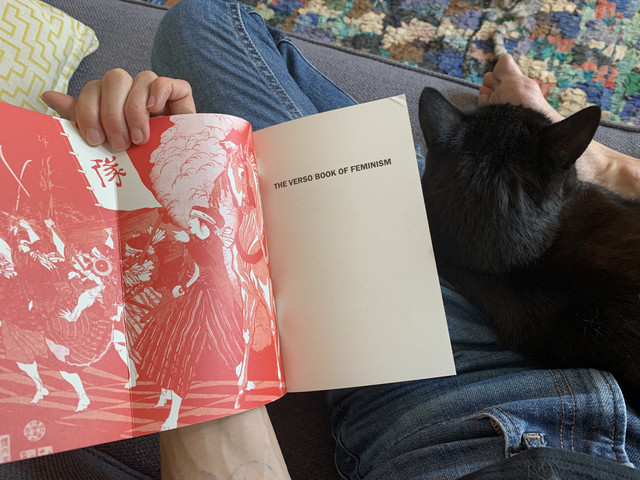 The Verso Book of Feminism is an unprecedented collection of feminist voices from four millennia of global history. It is one of our October Verso Book Club reads: a carefully curated selection of books that we think are essential  and necessary reading. Find out more about our Book Club here.

The Verso Book of Feminism is a weapon, a force, a lyrical cry, and an ongoing threat to misogyny everywhere.