Authoritarianism is a symptom of panic

An interview between Alain Bertho and Simon Brunfaut on the link between crises, authoritarianism, riots, and violence.

SB: What in your opinion makes this crisis unique?

AB: Everyone feels that this crisis is historic for the whole of humanity. It is a universal crisis that endangers the survival of each and every one. This situation is not the result of a war or a revolution, but of a major environmental dysfunction due to human activity itself, to its underlying logic. At the same time, the crisis has revealed the biopolitical failure of both national states and international organizations. It has a massive ecological and political unveiling effect. Nothing will be as it was before.

SB: Are we in a situation of chaos?

AB: If chaos means an inability to bring order to the way we think and manage what we are experiencing, then as Georges Balandier said, ‘disorder is first of all in our heads’. And our heads were in disorder even before the arrival of the pandemic. For two centuries, we had been living in the belief that humanity would meet difficulties with scientific, political or social responses. The fall of the Berlin Wall marked the end of the most important mobilizing utopia of the twentieth century. In the wake of communism, our historical conception of collective life collapsed and we lost our sense of future and hope. The current crisis is a turning point that reveals to the world the historical impasse we had reached. Today, unable to unlock the future, we are locked in the present. This subjective chaos exacerbates any search for coherence, whether political or institutional. At the same time, it generates a need for counter-narratives, including conspiracies.

SB: In your opinion, is an authoritarian trend emerging within our countries?

AB: The authoritarian trend is becoming ever more prevalent on all continents because it embodies the response of failing states, unable to legitimize the power they exercise over society in any other way. This worrying trend does not meet with the democratic opposition it should meet, which it would have met a few decades ago. In the absence of a clear alternative and a mobilizing counter-narrative, the chaotic management of the crisis by the state reinforces collective disarray.

SB: Could the management of the current health crisis have taken place in a less authoritarian and more democratic framework?

AB: In France, the Scientific Council has consistently recommended the involvement of civil society in the crisis. Its members, including its president Jean-François Delfraissy, have already managed various health crises and epidemics, from Ebola to AIDS. How did we manage the AIDS crisis? By involving patients in medical research, and medical research in health strategy. How did we manage the Ebola virus? With the help of community-based management to overcome the technical and medical shortcomings of the affected countries. West Africa is currently less affected by the pandemic, in particular because it has developed community-based, non-authoritarian management of health crises. Our governments are refusing to do so and are stubbornly narrowing the circle of decision-makers. In France, decisions are no longer even taken in the Council of Ministers but by a ‘defence council’ whose deliberations are secret. While authoritarianism is a symptom of panic, it is no guarantee of effectiveness.

SB: So, in your view, this crisis reveals a structural problem within our representative democracies?

AB: Our representative democracies have lost their capacity to represent. The state should be the synthesis of a general interest over and above the conflicting diversity that constitutes a national society. But all the mechanisms for social mobilization and representation are in tatters. The political decisions of our representative democracies are directly tied to the financial markets to which governments are primarily accountable. According to IMF figures, in 2018 sovereign debt accounted for 75 per cent of global GDP. In other words, the financial markets have a mortgage on 75 per cent of the world's GDP. It is difficult in these conditions to be truly accountable to the people. The Greek government in 2015 had a bitter experience of this.

Yet at the same time our states are confronted with strong mobilizations that resonate with one another, from Black Lives Matter to the feminist movement in its contemporary form. These mobilizations, rooted in the new generations, do not have the same representative dynamic as the social mobilizations of the last century, and particularly the workers’ movement. When ‘demos’ and ‘kratos’ separate in this way, democracy is obviously in trouble.

SB: ‘A riot is a temporary window on the world,’ you wrote. What do the current riots say about the state of our world?

AB: ‘A riot is the language of the unheard,’ said Martin Luther King. Rioting is a powerful force for bringing collective concerns into the public debate. For example, the denunciation of sexist violence and femicide is being expressed today in Mexico in extremely violent forms of mobilization. Women are attacking churches too. In France, in late 2018 and the beginning of 2019, the insurrectionary moment of the gilets jaunes made visible a social distress that neither the government nor the political opposition wanted to see. What cannot be said in words always finds other forms of expression. We should pay attention to the acts of rioters, which are a grammar of revolt. Precisely what or whom are they attacking? To say what?

SB: What distinction do you make between demonstration and riot?

AB: Demonstration in the twentieth century became a representative form disciplined by a normative political framework. The conversion of large social demonstrations into spectacles was achieved through staging, the use of music, colour codes, specific materials such as giant balloons. It met with a limit: the more beautiful it was, the more spectacular it was, the more disciplined it was, the less political effectiveness it had. In 2006, the mobilization against the ‘first employment contract’ in France won by actions to block motorways and stations. In 2016, ‘procession heads’ appeared, who no longer accepted the spectacle of the demonstration and tried to drag it into confrontation with the police. With increasing success.

SB: In your opinion, is the only thing that exists today a power relationship?

AB: The need for a power relationship has always been present, but the relationship between the state and society has changed. It has become both more indifferent and more brutal, as if the state were external to society. Mobilizations must face up to this and try to master this new agenda of violence. This means that the initial confrontation, which remains largely symbolic and is more of a performance than an insurrection, leads to the need to follow with a peaceful demonstration, without this being a ‘spectacle demonstration’.

SB: Will the crisis we are experiencing bring about new social tensions?

AB: Though the vertiginous increase in inequalities over the last few decades is far from having shown its full potential for social and political violence, new political potentialities are emerging. People are experiencing the incompetence and lies of the powers that be, and their own collective power. Our governments are no longer capable of mastering the complexity of today’s societies. In the context of the health crisis, our countries did not hold out thanks to state authoritarianism, but thanks to the mobilization of popular skills: inventiveness, collective and individual genius. The survival of people in their daily lives has been ensured by non-prescribed professional cooperation and local solidarity networks, and not by institutional policy. This popular collective intelligence embodies an authentic dynamic of re-democratization. We must stop trying to save representative democracy at all costs and concentrate on the democratic processes really at work today.

SB: But how do you think this movement can be sustained over the long term?

AB: Relations between people will not be the same after this crisis. We need to give this collective experience a constituting political power. We have to work together now on a new social organization, knowing that this is a difficult path. It will meet fierce resistance from the state.

SB: In the event of a third wave of the pandemic, do you fear a rise in violence in our societies?

AB: The second wave was marked by revolts. Exasperation in the face of authoritarianism was based on a real experience of the risks and possible responses. At the beginning of November, high-school students mobilized and demanded stricter and more rational rules in schools. They were harshly repressed. If a third wave is managed in such an authoritarian manner, we are heading for some turbulent days.

SB: Generally speaking, do we live in more violent societies? Do you, like many analysts, observe an increase in violence?

AB: According to the Uppsala University database, until the 2000s most deadly violence was inter-state violence, i.e. wars. This violence is being replaced by intra-state violence, especially civil wars involving foreign intervention. We are witnessing a displacement of situations of collective violence and a brutalization of government action. I have never seen such a violent police force in France, although the violence of the demonstrators is no more than situations in the past. Police violence is therefore not indexed to ‘social violence’. It is primarily indexed to the fear felt by those in power.

SB: In your opinion, is the capitalist system itself becoming increasingly violent?

AB: The financialization and digitalization of capital has generated a new violence over the body. As Ken Loach has shown so well, platform capitalism (Amazon, for example) exploits labour in a slave-like way, outside of a properly defined wage framework, because it no longer knows how to make profit in any other way with the collective skills that have developed. This is why this capitalism needs authoritarian governments. 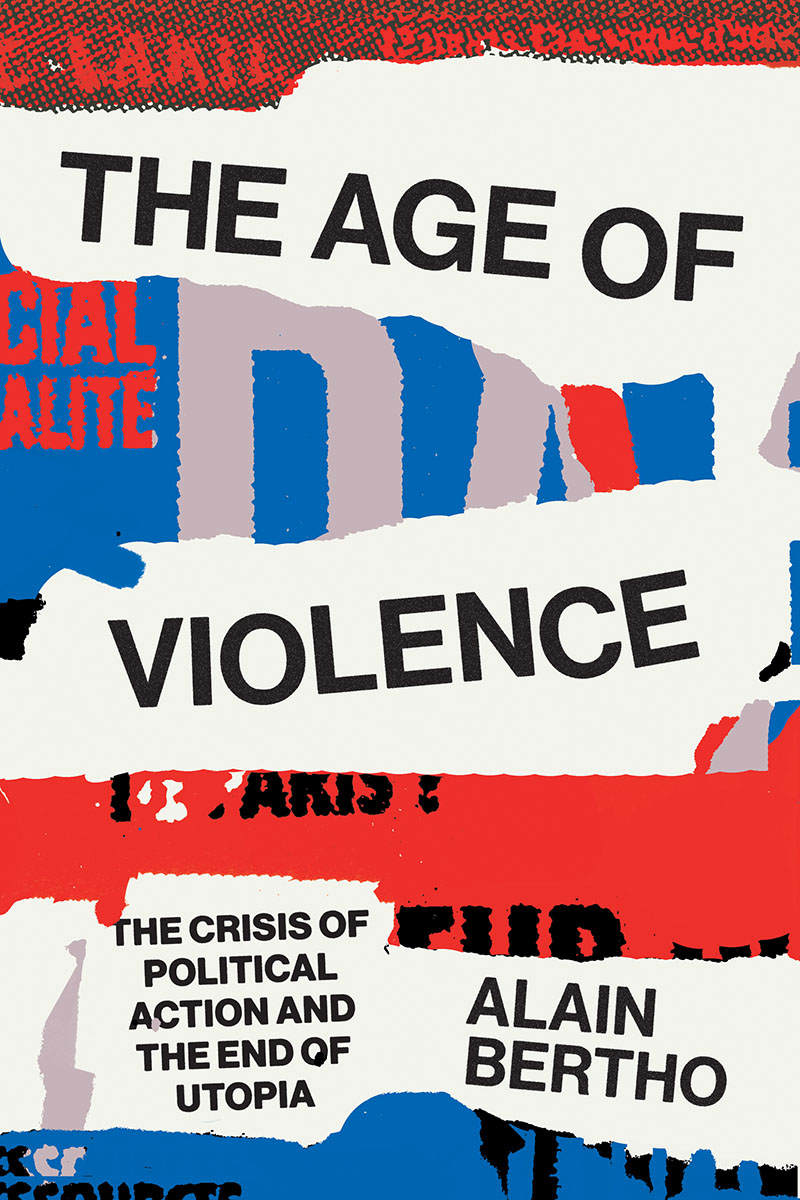