In The Shadow of the Mine,  we trace the history of Britain’s leading coal-exporting regions to understand how things have changed on the former coalfields. Durham and South Wales are alike in many ways, but very different in others.

Geology created contrasts between the areas. In Durham the western coal seams were exposed and lay relatively near to the surface, while those to the east were concealed under a deep layer of Magnesian limestone and extended beyond the coast under the sea. As a consequence, deep mining began in the west and moved eastward as mining techniques improved, often leaving redundant mines in its wake. There were no such problems in South Wales. Here the coal measures lay in an oval-shaped formation, with sharply incised river valleys cutting across from north to south, often exposing seams to drift mines. The shafts of deep mines were driven into the valley floors. There was no systematic spatial shift in the focus of coal production as found in Durham; rather, many centres emerged around the same time in each of the twenty valleys that stretch from the Ebbw Fach across to the Taff, Cynon and Rhondda in the central coalfield, and then to Neath and the Loughor valley of the western anthracite belt.

Change on these coalfields speeded up in the 1960s under Harold Wilson’s Labour government, with the dramatic closure of a large number of mines. The contraction continued at a slower pace through the seventies. The major investments of the period took place elsewhere, in what became established as the Central Coalfield of the Midlands and Yorkshire, which seemed to have a stable market in electricity generation, producing the steam that drove the giant turbines. There, in thicker, less faulted seams, the coal was easier to mine with machines. In Durham and South Wales, on the other hand, the coals were harder to mine and better suited to the steel industry’s needs and those of domestic and industrial users. These areas came to be seen as part of the part of the coalmining periphery – on the margins, their future less secure.

In Durham the surviving mines were dotted along the eastern seaboard. In Easington Colliery village, for example, over ninety percent of the jobs for men were found in the mine. Small inland collieries could still be found – South and East Hetton, Bearpark and Sacriston – and there was also a large coke works at Derwentaugh in the Derwent valley. The general picture, though, was one of eastern concentration. There was a noticeable build-up of miners living in the centre and west of the county travelling quite long distances to their new mine on the coast, potentially remote from the activities of the union lodge. This contrasts with South Wales where, although the coalfield was similarly diminished, the coal mines (and mining jobs) that remained were spread more evenly from east to west, with clusters of dense employment built up around Abertillery, Mountain Ash, Maesteg and Ystradgynlais (see Maps 1 and 2, below). 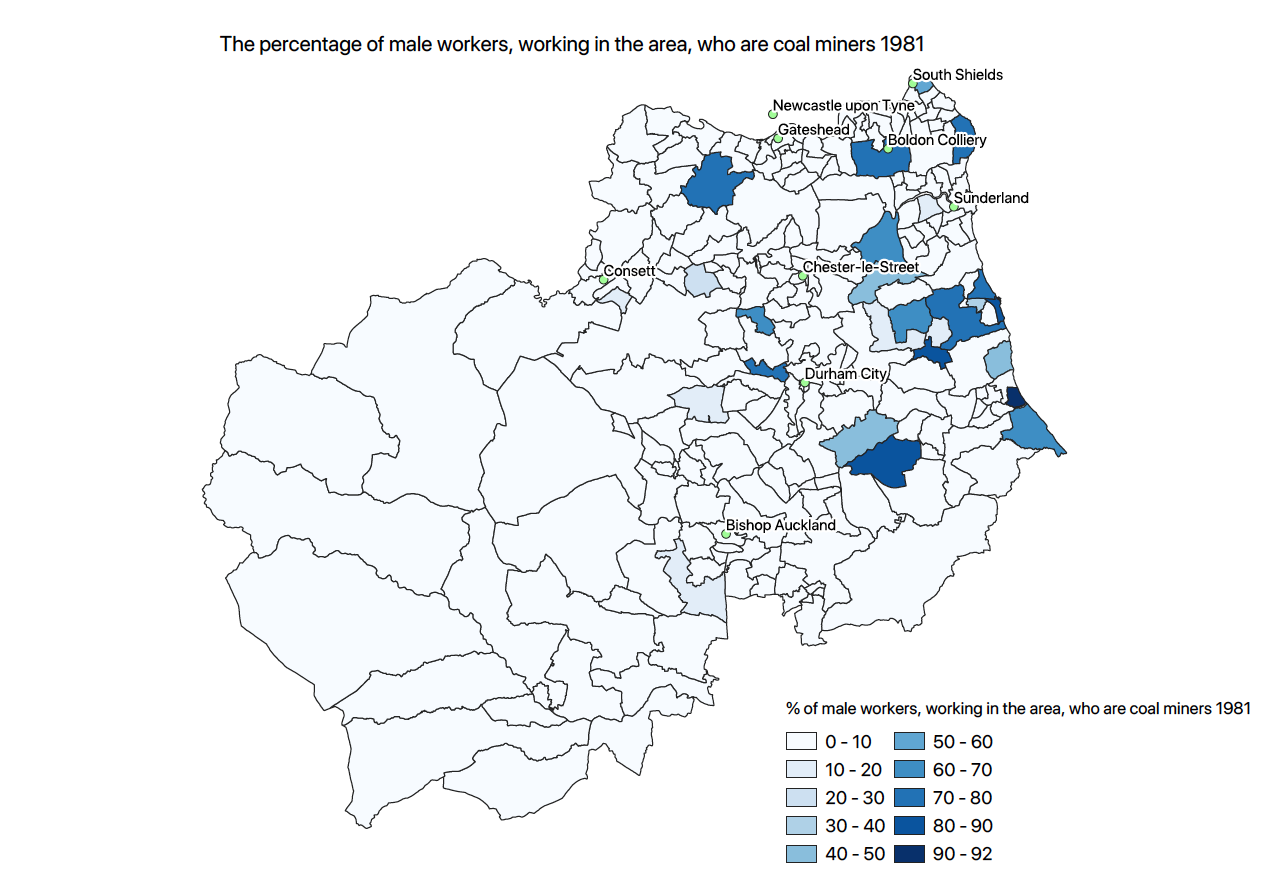 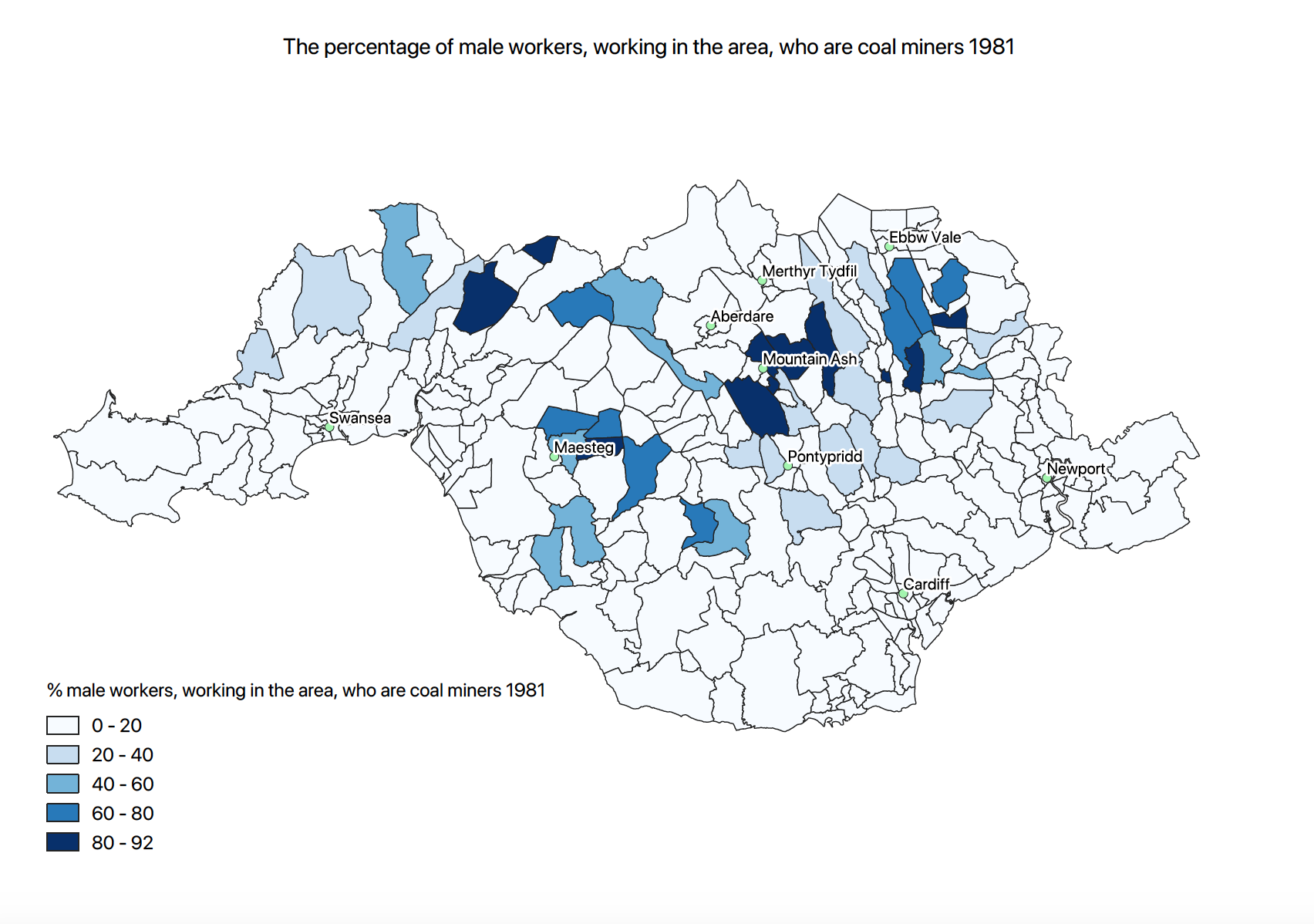 These distinct patterns had practical consequences for trade-union organisation and also for what was meant by the ‘coalfield’. In one way, the common-sense way perhaps, it could be defined by the location of mines and jobs. Alternatively, the coalfield boundary could be traced by the pattern of residence of the miners. This came to be the definition used by Stephen Fothergill and the research team at Sheffield Hallam University, influential in the work of the Coalfields Communities Campaign and also in a broader policy context. In the case of South Wales both definitions produced the same outcome, as jobs and miners were spread evenly across the area. However, in Durham a definition based on residence created a map of the coalfield that extended well beyond the constellation of coal mines and mining jobs on the east coast, while one based on the location of the jobs produced a much more restricted sense of the coalfield area.

Given the salience of jobs in the 1984–85 strike against Thatcher’s closures and the importance of the trade union lodge in the struggle, this would seem most appropriate. But when we combine this geography with the location of the miners we get an understanding of the difficulties faced by the NUM in Durham in communicating with and mobilising a membership spread far away from their lodge base. In fact we know that the breaking up of the strike in the Area was precipitated by managers contacting men in out-lying places, persuading them to return to work (see Maps 3 and 4). What the maps make clear is that although coal mining had by this point ceased to be the dominant driving force in South Wales and in the North East, it remained highly significant in particular localities, where closure was deeply threatening to people’s livelihoods. 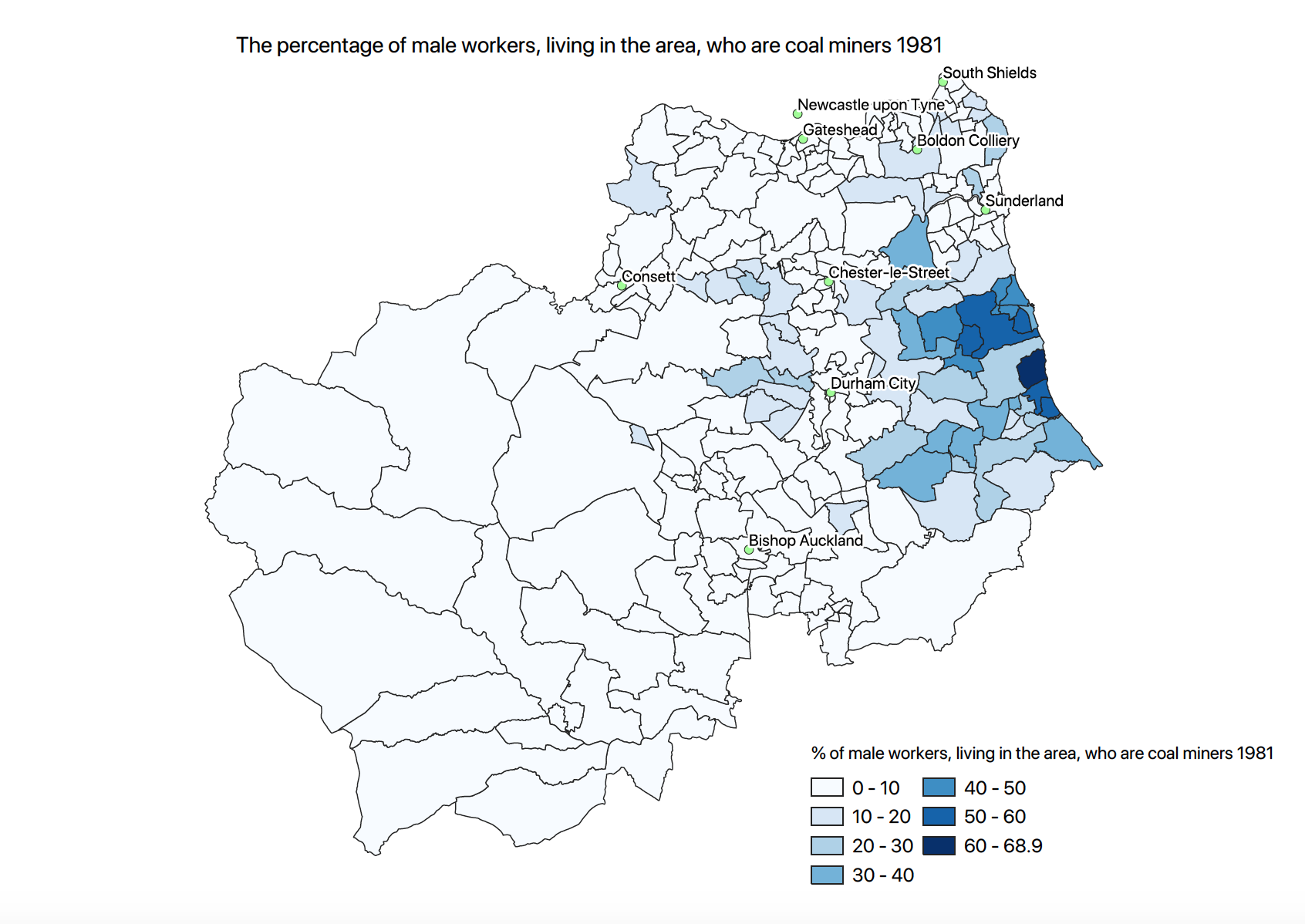 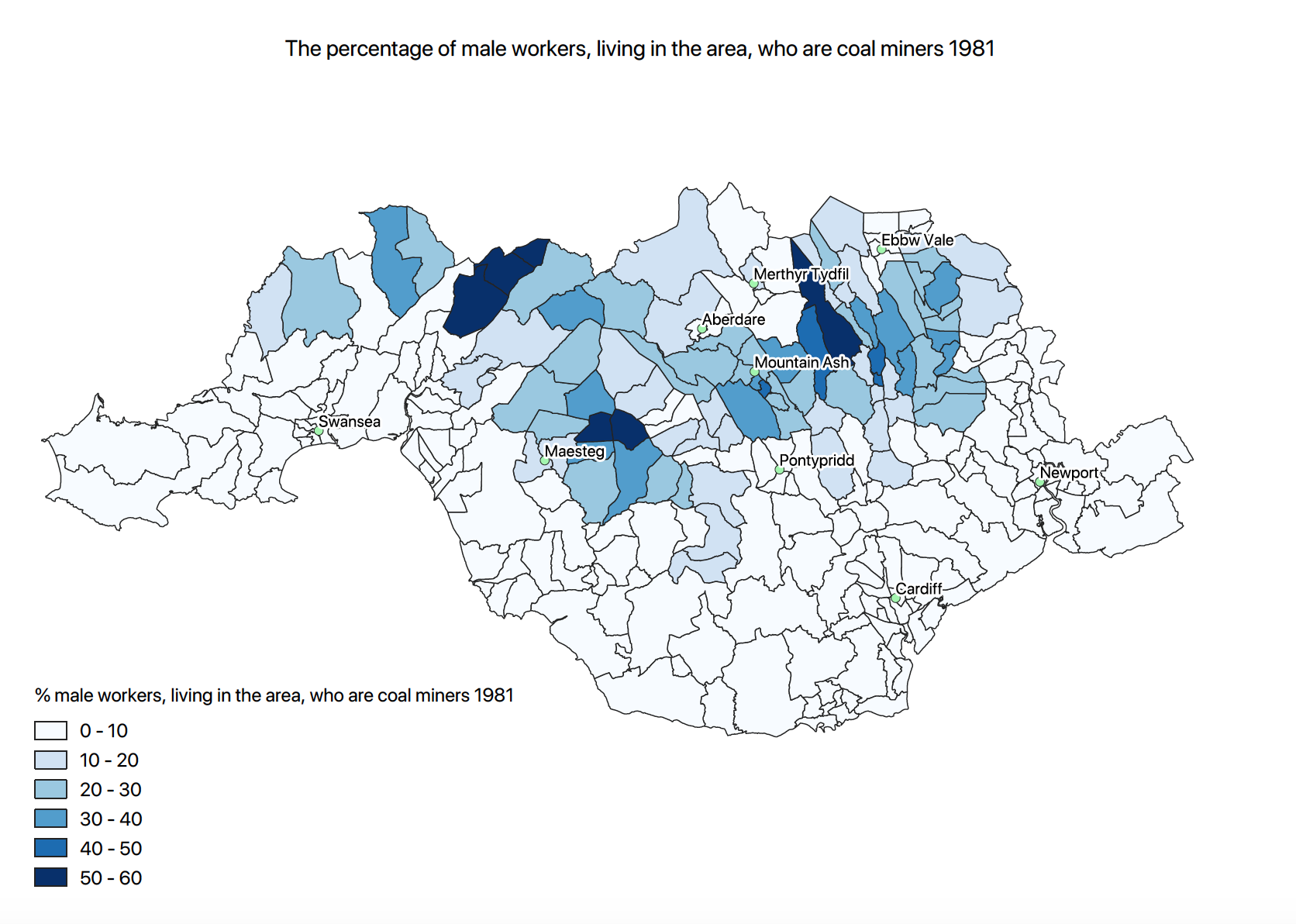 The question of coalfield boundaries is central to understanding the new economic developments that took place after the last mines closed (see Map 5). In South Wales, investment in plant and office space along the M4 corridor by the multinationals Ford, Bosch and LG among others clearly passed the old coalfield by. In Durham the picture is more complicated. The A1(M) and A19 attracted investment by the likes of Fujitsu, Netpark and Samsung. By residence, this is former coalfield country. But the last surviving pits in Durham lay to the east of these arterial routes. Thus a definition based on residence gives a misleading impression of the fortunes of the two areas, presenting Durham as being more successful in economic regeneration than South Wales, when in fact identical processes were taking place: new investment decisions were made with the intention of avoiding recent sites of mining. 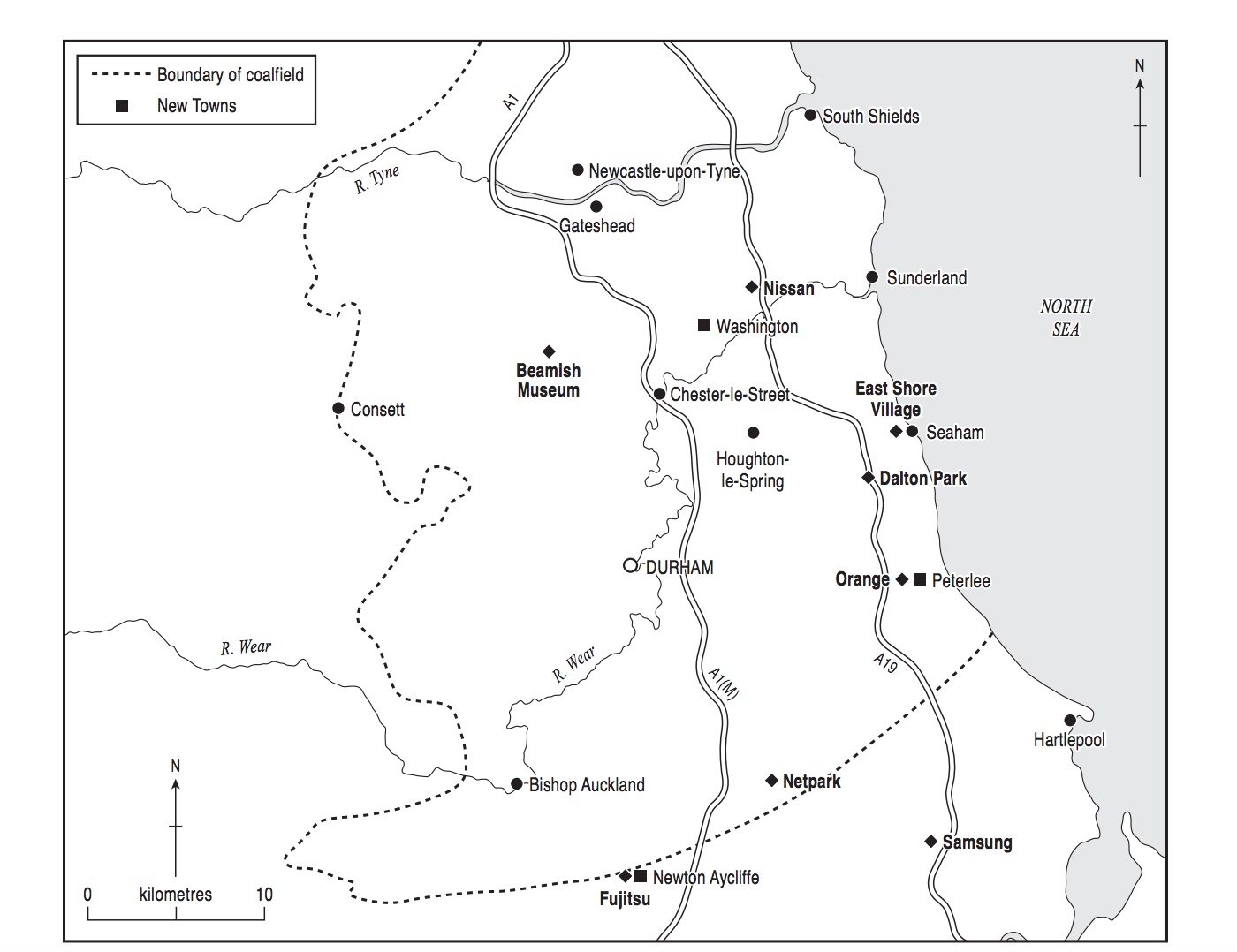 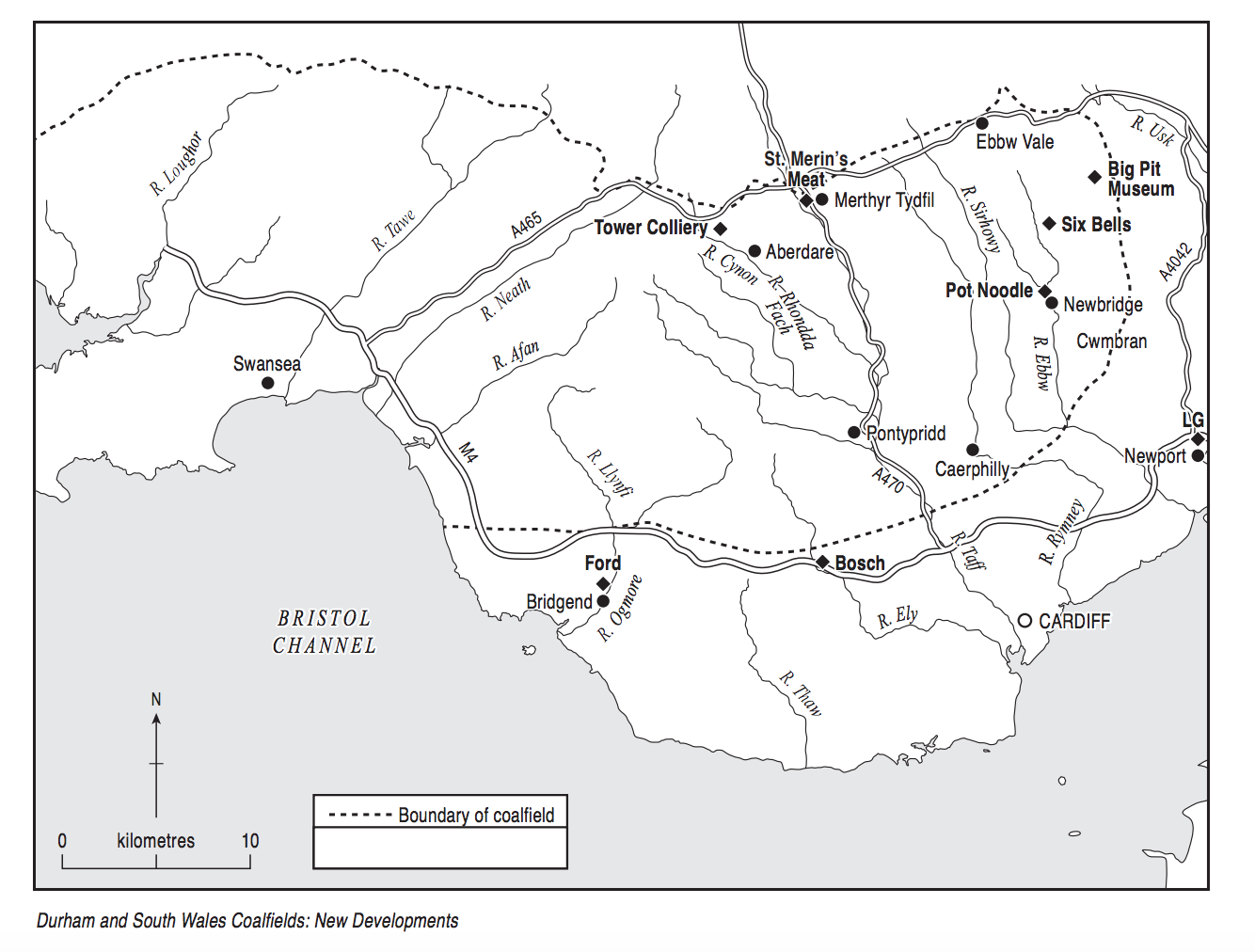 In other ways though, the choice of a residence-based definition can be helpful, particularly when we consider the health of the post-mining population. Maps drawn of the basis of historic residence provide a powerful predicator of the distribution of ill health in the twenty-first century. Maps 6 and 7 show the proportion of people drawing upon forms of invalidity and sickness benefits in 2011. The historical link between mining and ill health is made clear in the resemblance between this distribution with that of miners’ homes as of 1981. The end of mining was thought to bring with it an improvement in the health of the coalfield population: no more dangerous digging underground. But in South Wales in 2001, 11 per cent of the population claimed Disability Living Allowance; in Durham 8 per cent. By 2013, the proportions had barely changed: 11 per cent of people in South Wales and 9 per cent of those in Durham were living on Incapacity Benefit. It is striking is that in spite of the commitments made around improving health by the Blair government, there has been little or no noticeable recovery in health outcomes. COVID-19 has exacerbated these problems and Johnson’s vacuous claims about “levelling up” suggest that things won’t improve in the foreseeable future. 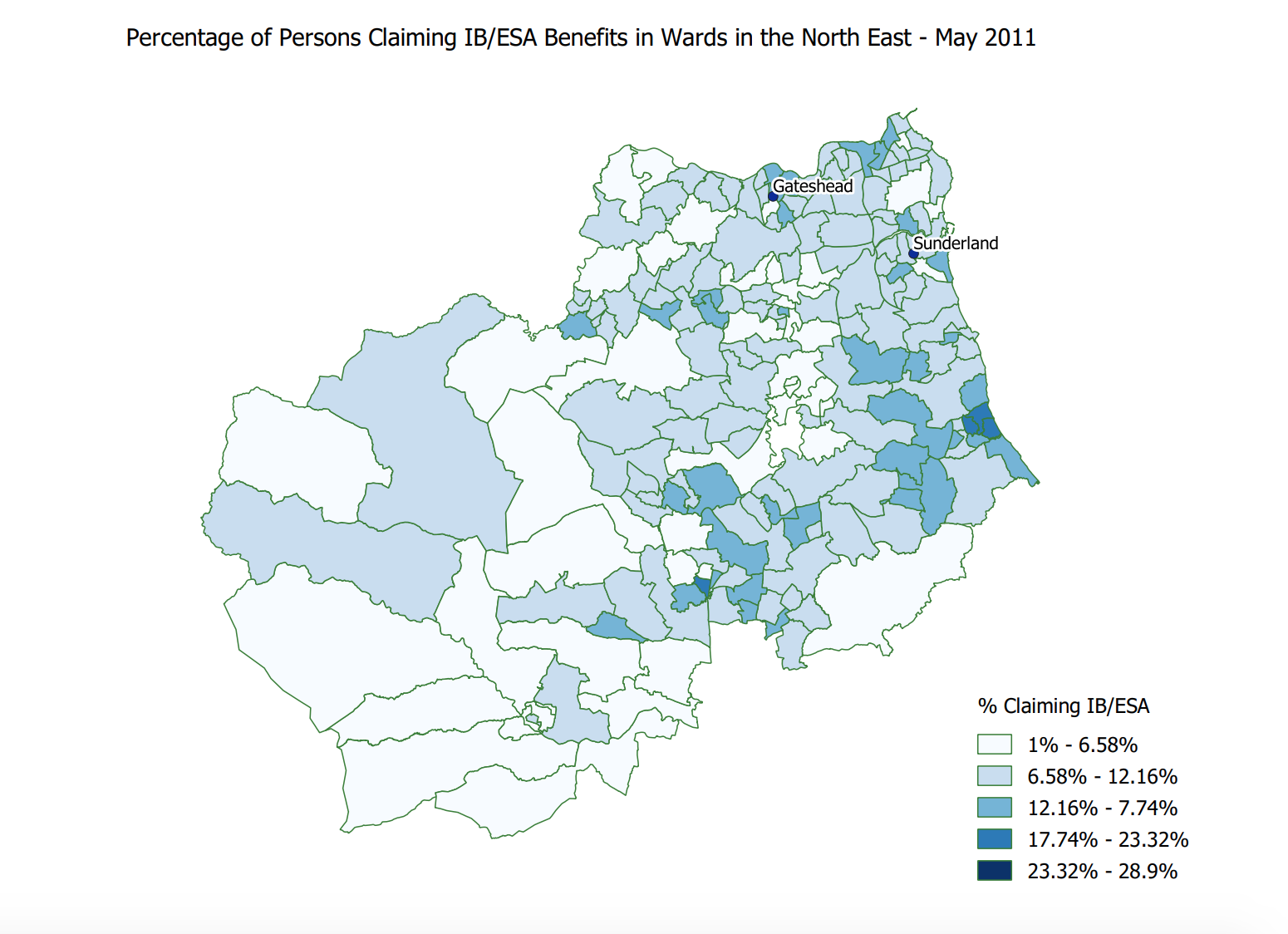 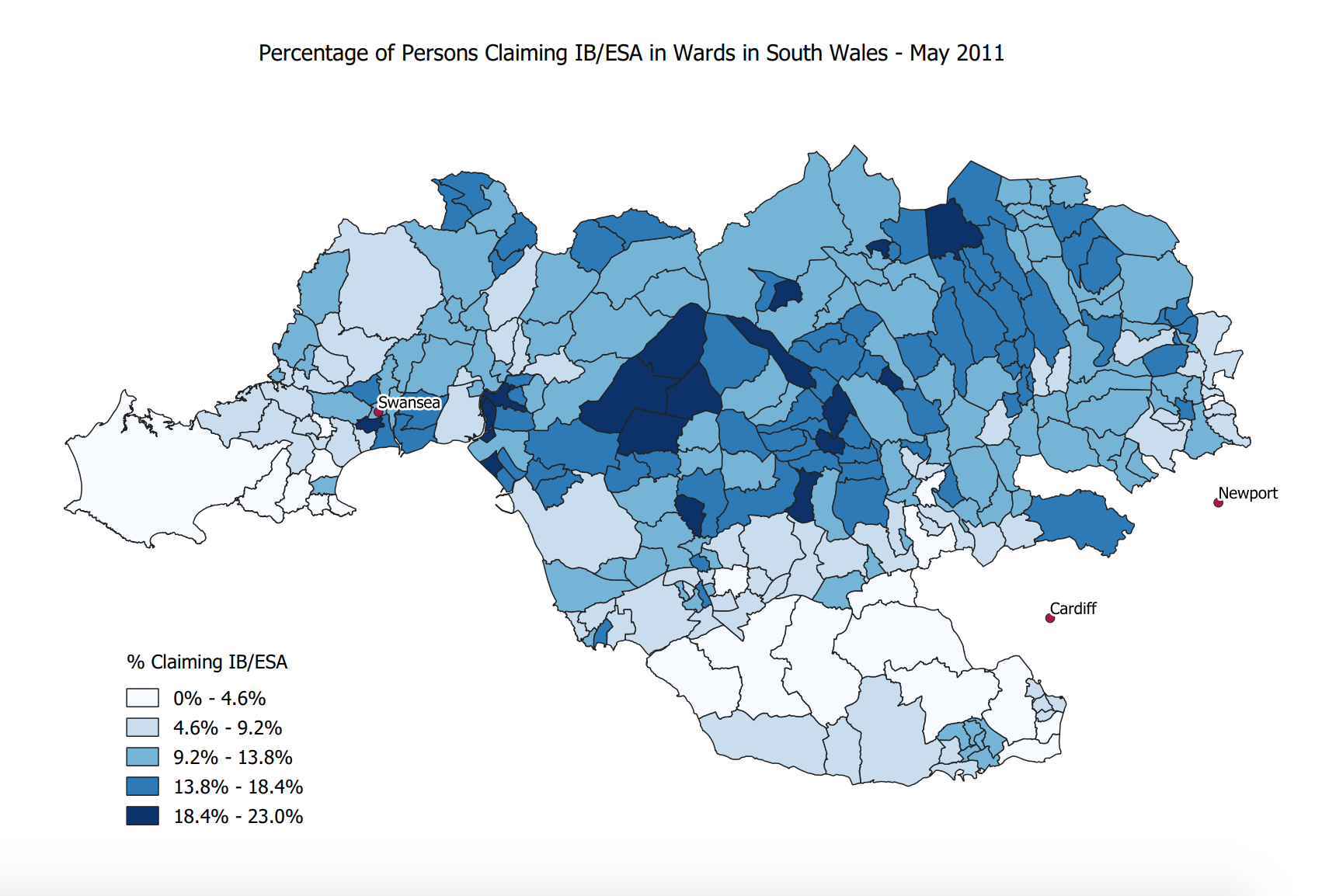 The Shadow of the Mine: Coal and the End of Industrial Britain is out now from Verso.