In pt 2 of the Revolutionary Mathematics roundtable, Rahel Süß looks at the relation between the rise of algorithmic capitalism and democracy.

In that sense, the book is an important contribution to discussions on informational capitalism where metaphysical questions are often too easily dismissed. Joque rightly claims that the work algorithmic systems do is simultaneously material and deeply metaphysical. That is to say, confronting merely the economic processes managing our social affairs is not enough. We must also ask what metaphysical force algorithmic systems produce and how they determine political possibilities.

In a world made of data, algorithmic systems mediate social relations through the production of abstractions. These abstract forms come to be objectifying because they allow us to understand what is “objectively” true. But these objects that produce the social world are lodged with a long history of violence and exploitation. As Joque is clear, the Enlightenment, colonialism, white supremacy, patriarchy, and capitalism were all constructed upon abstractions. These forces of abstraction grant a certain freedom to those who are well represented by them, while eradicating the experiences of others.

To engage with algorithmic culture politically we must understand how we have arrived at this moment. Joque carefully explains the shifts from Ronald Fisher's frequentism, focussing on detecting group level difference, to Neyman and Pearson's statistics about being right often enough, to, more recently, Bayesian models. Unlike the early and mid-twentieth century attempts to find an objective ground for statistics, the “Bayesian dream” allows updating our beliefs about the world as new data arrives. In abandoning the objective terrain established by an ideal, Bayesian statistics start calculations with a guess about the world and then continuously update probabilities as new evidence is gathered.

When does a Bayesian dream become a nightmare? Here, Joque is at his sharpest. The overarching political problem he engages with is a form of knowledge production from a specific commodified position. In a world of cheap computation and massive amounts of digital data, meaning reflects not the world as it is, but the world as it is profitable. Bayesian statistics come to be objectifying because their function moves from the discernment of knowledge to the production of a course of action which the market will most likely reward. Statistics thus directly subsumes knowledge to its exchange value.

Joque then envisions the task of revolutionary mathematics to intervene in these metaphysical determinations and to put statistics and machine learning to other ends. He also insists that the task can’t be to de-objectify our situation by showing what “is really going on”. Instead, we have to create what he calls different “mysteries” and new forms of abstraction that are freed from the production of privatized knowledge and value.

But for all the book’s ambition, we learn very little about what form these new mysteries could take. While I think Joque is right to call for new socially productive forms of abstraction, what this means in practice is far from clear. Given the fragile state of current liberal democracies we might want to ask: What new possibilities might revolutionary mathematics bring for our democratic futures?

Today, the contemporary liberal discourse is obsessed with two things: democracy and digitalisation. With the Arab Spring, Brexit, and Trump we have three examples of how liberal discourses focus obsessively on the supposed crisis or rise of democracy and the challenges or opportunities of digital technologies. While democracy and digitalisation are objects of enormous public debate it is important to understand their ambivalent attachments. Abstractions play an important role in any explanation as to why.

The language of democratic control, for example, comes out of a liberal framing of collective problems as technical problems. At the same time, the liberal view of democracy understands social conflict primarily as disagreement rather than as conflict over power and over particular forms of political institutions managing our social affairs objectively. What is distinct about such a framework is that it understands political institutions (and the market) as capable of making “objective” and “neutral” decisions—just as most commentators understand algorithmic systems as objective and neutral.

Liberal democrats hold the view that by following the norm of procedural fairness, ideals of representation, majoritarian rule, equal political and legal rights can be best realised. Similarly, rendering algorithms accountable and legible has come to be seen as the most efficient means of validating truth and re-establishing democratic control. The dominant liberal response to the growth of the digital economy has been a call for greater government regulation, including demands for protecting individuals’ data and privacy, adopting an ethical code of conduct, and publishing algorithm’s source code.

From the perspective of Revolutionary Mathematics, we can pose the problem differently. By embedding the algorithm within the problematic situation—within their objectifying forces that structure possibilities and control some solutions in favour of others—the democratic nightmare resides not only in problems of algorithms’ transparency, accountability, and legitimacy but in automatically produced norms or abstractions. Because algorithmic systems generate what matters, Louise Amoore explains in Cloud Ethics, they create the very conditions of what a democracy could be. Consequently, what matters is not merely the regulation of algorithmic rights or wrongs. Instead, we need a better understanding of how algorithmic systems create what Amoore calls “a regime of recognition”⎯ways of verifying democratic truths in the world.

Similarly, we must understand how liberal democrats mediate values of equality and freedom through the production of abstractions. As clearly stated by Joque, the danger is not in abstractions per se, but in the failure to recognise the limits of these abstractions and the ends they serve. In that sense, liberals may defend equality and freedom but the purpose of referring to those norms is often to legitimise specific political settlements. Indeed, this becomes clear when liberals construct racism as illiberal by tying it to the past or by associating it with the extreme right while being utterly silent on how racialised oppression and violence has been one of the drivers of liberalism.

Historically, liberal democratic abstractions are bound up with imperialism and colonialism and often function as a cover up for capitalist exploitation. As abolitionist theorist Joel Olson reminds us in The Abolition of White Democracy, liberal norms of individual autonomy and equal opportunity were formed against a backdrop of Black subordination and white privileges. Crucially, whiteness does not simply exclude some persons from enjoying democratic rights⎯it builds a particular conception of democracy, one where white privilege permeates everyday life and institutions, while making them seem the natural result of individual effort.

The task ahead of us is then to engage with the metaphysical conditions under which these abstractions emerge and operate so that new democratic mysteries can surface. Arguably, the mistrust in procedural unfairness—or algorithmic wrongs in the context of algorithmic injustices—doesn’t go deep enough. As Joque notes, the question is not so much what kind of algorithms produce a biased result, but what kind of abstractions make it possible for algorithms to produce a biased result.

As long as abstractions favour privatized knowledge and exchange value, we must ask how algorithmic logics of accuracy and efficiency are imposed onto political domains at the expense of other values. We can then see that democratic decision-making relies heavily on solutionism. There are two distinct problems here: First, solutionism masks the social conflicts embedded in democracy (and digitalisation), and second, it replaces the contested nature of politics with demands of the market. Alternative political arrangement become more difficult to imagine, in part because the solution always gets the problem it deserves. The mantra is: For every social problem there is a technology, an algorithm.

How then can we revive our democratic dreams? From the perspective of Revolutionary Mathematics, the task must be to theoretically and practically engage in the production of new knowledge and “new mysteries”.  On a conceptual level, we must ask the question: How could a radical alternative to liberalism understand both democracy and digitalisation differently and use the encounter with each to reshape our understanding of both? Here we can think of replacing the liberal understanding of democracy limited to a narrow political sphere of the state and downplaying democratic experiences of everyday life. In its place, we might want to think of democracy more broadly as a way of life. In terms of political strategy this could mean positioning democracy as a radical transformation of society which allows us to imagine an ecosystem of democratic alternatives. This would entail a shift from understanding democratic institutions as embodying fair procedures for resolving disagreements to organising collective power in different domains of social life. From enhancing social participation around the creation of data and processes of datafication to taking back control over our digital and social infrastructures such as healthcare, education, and public transportation.

This article is part 2 of the roundtable on Revolutionary Mathematics by Justin Joque. Click here for part 1 and here for part 3.

Rahel Süß is a political theorist and a postdoctoral visiting fellow at the London School of Economics and Political Science. She is the founding director of the Data Politics Lab (Humboldt-University of Berlin) and the founder of the journal engagée. 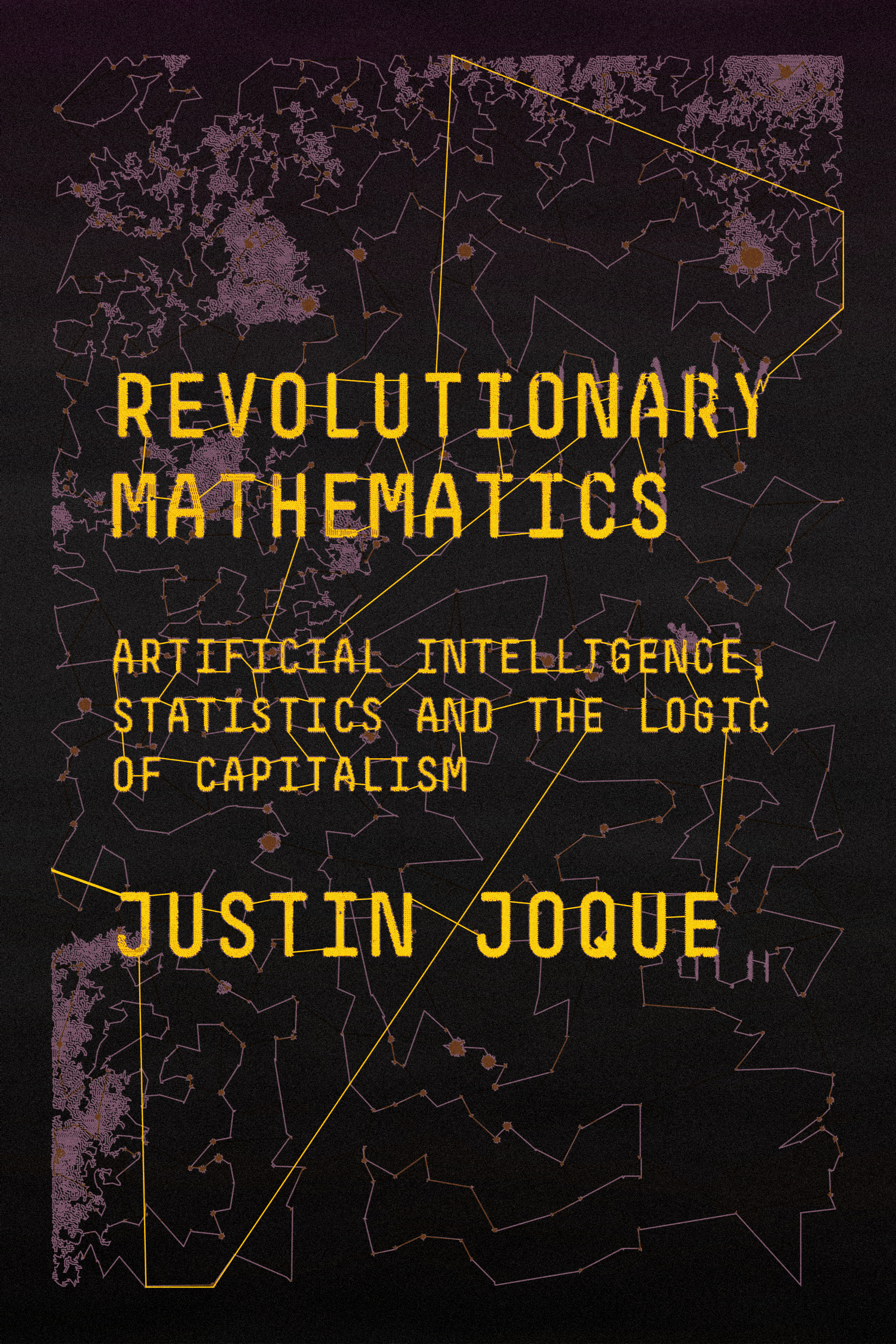